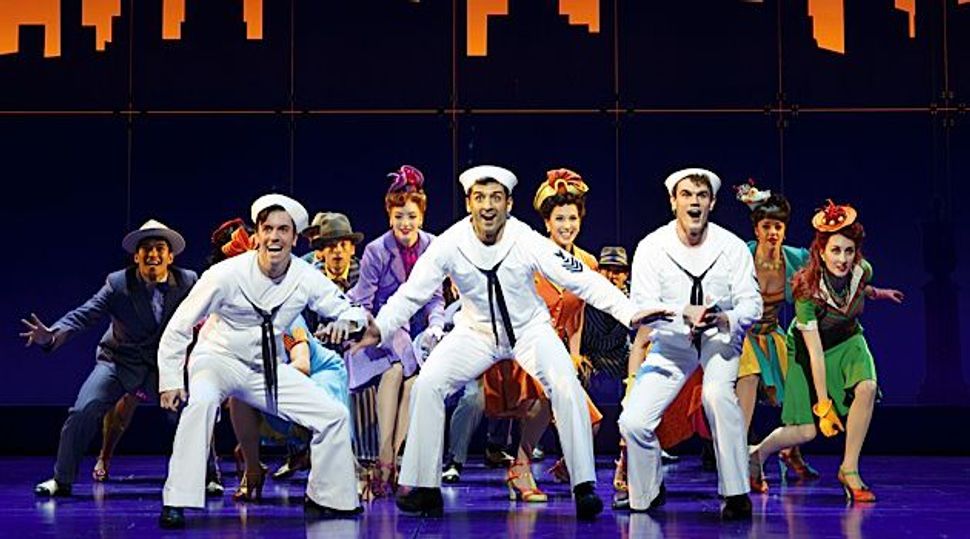 Start Spreading the News: Clyde Alves, Tony Yazbeck and Jay Armstrong star in ‘On the Town.’ Image by Joan marcus

There’s always some nostalgia baked into a Broadway musical, that old-fashioned and always-dying art form that reached its apex in middle of the 20th century. It’s there in the subject matter, too: Even the freshest “Guys and Dolls” puts you in vintage New York; “Gypsy” is ever in the late days of vaudeville; and even recent additions to the canon, like “Grey Gardens” and “Spring Awakening,” “Jersey Boys” and “Hairspray,” place us decades in the past.

But I’ve rarely seen a production so bathed in nostalgia, so affectionately looking back at the old days, and arguably so mired in them, as the revival of “On the Town,” now playing at the recently (and nostalgically) rechristened Lyric Theatre. It is a nostalgic show, nostalgically staged, which is both its appeal and, though to a lesser degree, its trouble.

“On the Town” is, of course, the classic World War II romp about three sailors looking for love on 24-hour leave in New York: music by Leonard Bernstein, book and lyrics by Betty Comden and Adolph Green, choreography by Jerome Robbins (and based on Robbins and Bernstein’s ballet, “Fancy Free”). It opened on Broadway in 1944; but the famous MGM movie, directed by Stanley Donen and starring Gene Kelly and Frank Sinatra, was released in 1949, with much of Bernstein’s score replaced.

Director John Rando’s revival, in the cavernous Lyric (previously known as the Foxwoods Theatre and recently home to “Spider-Man: Turn Off the Dark”), whisks us immediately back to the 1940s, with a giant American flag emblazoned on the curtain and a performance of the National Anthem — during which, at least at the preview I attended, the audience rose and joined in — before the curtain rises. We’re in a predawn Brooklyn Navy yard. A bright red ship’s prow juts in from stage right and, soon enough, the whistle blows, it’s 6 a.m. and those three sailors are bounding down the gangway. The orchestra hits those first jazzy chords of “New York, New York,” the sailors pirouette, and a quick shiver goes down your spine. This is the right kind of nostalgia — for big, old-fashioned Broadway, for that score, for that Robbins-y balletic choreography. (The dances here, by Joshua Bergasse of “Smash” fame, are Robbins-inspired rather than Robbins-replicative.) It’s a delight.

Indeed, there’s much here to delight, notably that score and those dances and Comden and Green’s punchy, vaudevillian jokes and shtick. The three leading men — Tony Yazbeck as lonely, earnest Gabey; Jay Armstrong Johnson as naïve Chip; and Clyde Alves as macho Ozzie — are charming, ingratiating performers and able dancers (and not too bad to look at, either).

Alysha Umphress is hilarious and earthy as the lusty cabdriver Hildy Esterhazy, who seduces Chip; Elizabeth Stanley, as the anthropologist Claire de Loon, who finds in Ozzie her perfect specimen of manly man, is a classic screwball New York broad. Megan Fairchild, a principal dancer with the New York City Ballet making her Broadway debut, plays Ivy Smith, the virginal/not-so-virginal Miss Turnstiles whose poster entrances Gabey, and, well, she’s a lovely dancer. Phillip Boykin, Stephen DeRosa, and the inimitable Jackie Hoffman double and triple as the boys’ various interlocutors and antagonists, a collection of hectoring, crooning and kibitzing old New York characters. Even the sets (and non-obnoxious projections) by Beowulf Boritt, the costumes by Jess Goldstein, and the lighting by Jason Lyons evoke a cartoonishly stylized midcentury Manhattan.

But there are also points at which all this nostalgia can become oppressive. “On the Town” is an old-fashioned show with an old-fashioned running time: nearly three hours. And although it dates from the year after “Oklahoma!,” it’s very much a creature from before Rodgers and Hammerstein’s revolution, a stylish but largely vacant romp of an entertainment. It’s slapstick that moves at a lugubrious pace. There is some new material from Robert Cary and Jonathan Tolins, but it also still offers some outmoded gay-caricature jokes. It can, at moments, wear.

But then there’s another dance break, another dream ballet (yes, there are two), another ridiculously named comic relief character, and, to quote a different Donen, Comden and Green MGM masterpiece, you’re happy again. In a not especially subtle show, its final moment is simple and tender: As our boys return to their ship for that 6 a.m. whistle, another three sailors are heading out in excitement, ready to set off on their own adventure — Gabey and Chip and Ozzie no longer special cases but just another trio in a never-ending wartime parade of servicemen. And again the orchestra starts up “New York, New York,” and again those balletic jumps, and, unavoidably, another little nostalgic thrill.