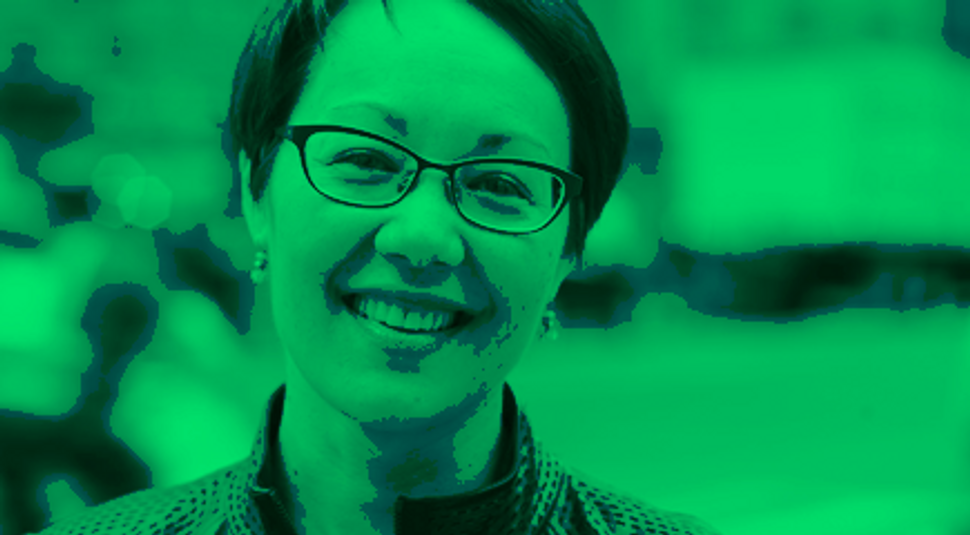 As senior cantor at New York’s Central Synagogue, Angela Buchdahl was known to team up with one of her colleagues to perform a “mash-up” — an artful blending of two thematically linked but musically distinct songs. “Hatikvah” was woven into “America the Beautiful.” For Passover, the two cantors combined “Dayeinu” with the spiritual “Oh, Freedom.”

The unusual pairings are emblematic of Buchdahl herself, who seems to effortlessly embrace her many dual identities and heritages: rabbi and cantor; Korean Buddhist and Ashkenazi Jew; a person who has shattered glass ceilings and quietly works to uphold tradition; who sends her three children to Jewish day school and puts kimchi on her Seder plate.

Her rising star within the Reform movement was catapulted even further this year when she became the first woman to be named senior rabbi at Central, a huge, fancy and immensely popular and influential synagogue on Manhattan’s Upper East Side. “She’s a once-in-a generation leader,” said Rabbi Rick Jacobs, head of the Union of Reform Judaism and her mentor when both were at Westchester Reform Temple.

Being a “mash-up” Jew did not always come easily to Buchdahl. Born in Korea, raised in Tacoma, Washington, and educated at Yale, she recalls feeling as if she was the “only one” to look and act and think as she did. “My internal questions of authenticity loomed over my Jewish identity throughout my adolescence into early adulthood, as I sought to integrate my Jewish, Korean and secular American identities,” she wrote in a 2003 essay for Sh’ma Journal.

After feeling particularly marginalized in Israel on a summer visit during college, Buchdahl was ready to renounce Judaism. It was her Korean Buddhist mother who challenged her, asking, “Is that possible?”

“It was only at that moment that I realized I could no sooner stop being a Jew than I could stop being Korean, or female, or me,” she wrote.

Buchdahl decided to have a giyur, dipping into the mikveh to reaffirm her connection to Judaism, and went on to receive ordination as a Reform cantor and rabbi. Her melodic voice has range and texture — she can perform the iconic music to Kol Nidre as expertly as an old-time hazan, then strap on her guitar and belt out her own interpretation of a show tune.

Her personal, inclusive voice helped her secure her first position at Central and earned her a passionate following, said Howard Sharfstein, the synagogue’s honorary president. “When Angela sings ‘Hashkiveinu,’ I’m in another place and I’m at peace,” he told the Forward in 2013.

Now, as senior rabbi, Buchdahl, 42, faces the greater task of managing the expectations of those who see her as the new face — literally — of Reform Judaism, a movement where intermarriage is the norm and cultural diversity the new normal. Her sermons on the High Holidays may give some indication of her rabbinic style. On Rosh Hashanah, she urged her congregants to observe the Fifth Commandment, to honor one’s parents, even though she acknowledged it is the hardest commandment to truly follow. Her emotional Yom Kippur sermon about Israel brought Central’s members to their feet.

Honoring the past and confronting the future — that seems to be Angela Buchdahl’s unique path.