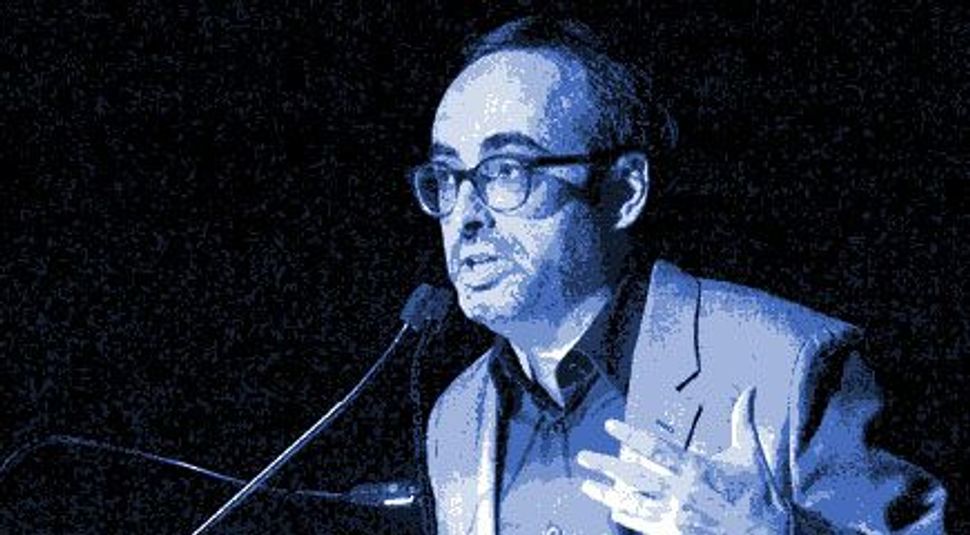 “What’s funny is that I’m not self-hating at all. I like myself quite a bit,” Gary Shteyngart, 42, told the Forward’s Yevgeniya Traps earlier this year. Luckily, despite the self-loathing that the author, humorist and star of book trailers (featuring his former student James Franco) affects in his comic persona, Shteyngart is not alone in that positive assessment of his worth. Writing for the Forward, Gal Beckerman — who had previously praised Shteyngart’s 2010 madcap dystopian romp “Super Sad True Love Story” as “hilarious,” “dead-on” and “Rabelaisian” — called the author’s 2014 debut memoir, “Little Failure,” his “best book yet.”

If 2014 was the year of the Russian Jewish writer, as witnessed by the publication of such acclaimed works as Anya Ulinich’s “Lena Finkle’s Magic Barrel,” Boris Fishman’s “A Replacement Life,” David Bezmozgis’s “The Betrayers,” Yelena Akhtiorskaya’s “Panic in a Suitcase” and Lev Golinkin’s “A Backpack, a Bear and Eight Crates of Vodka,” then it was Shteyngart who started the trend with his 2003 debut, “The Russian Debutante’s Handbook” — the first widely acclaimed novel of Gen-X Jewish immigrant fiction.

Mashing up Philip Rothian introspection, Woody Allen-esque schlemielery and Jackie Mason-esque Borscht Belt delivery with a whip-smart pop cultural sensibility, Shteyngart was and continues to be a tonic for the humorless earnestness and solemn “importance” that can often hamper first-generation immigrant narrators. A late arrival to Twitter, he has also proven adept at social media; 46,000 followers track his witty gibes and japes.

As for this year’s “Little Failure,” at 384 pages, it can hardly be considered little and, given its enthusiastic critical reception, it can hardly be considered a failure. One is tempted to cite a smattering of positive notices in the mainstream press but for the fear that one would fall victim to the affliction of over-blurbing, something of which the super-generous Shteyngart has often been accused. (Earlier this year, much to the chagrin of authors everywhere, Shteyngart announced in the New Yorker that he would become more discriminating in his penchant for blurbing other authors.)

Reviewing “Little Failure” for the Forward, Beckerman wrote that the book is “a portrait of the artist as a young asthmatic, a pathetic yet imaginative and eccentric outsider.” And, though explicitly autobiographical, it “has all the charms Shteyngart has displayed in his three novels, an addictively idiosyncratic voice that is among the funniest of any novelist writing today.” But it’s also a step forward, since “his comedy has also increasingly been laced from novel to novel with more and more pathos, [and] the memoir represents a further maturation.”

Now that Shteyngart has conquered both fiction and nonfiction, one wonders what his work will look like when we reach the bleak future he predicted in “Super Sad True Love Story.” Television? Motion pictures? A comfortable early retirement? As long as Shteyngart’s voice remains fresh and his former students famous, there should be no end to the possibilities.