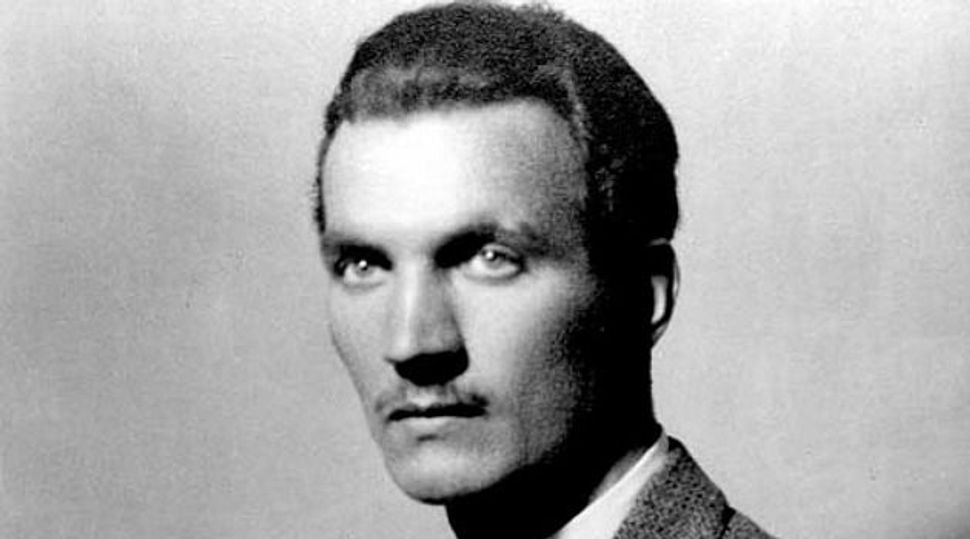 At the core exhibition of the new Museum of the History of Polish Jews, which celebrated its official inauguration two weeks ago, there is a special corner devoted to Jan Karski, the officer of the Polish underground who was one of the first to alert the Western allies of the atrocities being committed by the Nazis in occupied Poland.

Karski also appears in the form of a lifelike statue outside the building, equipped with a sound device so that visitors can listen to his experiences before and during the Holocaust.

Yet, not one of Karski’s relatives was invited to the inauguration of the museum on October 28, Karski’s niece, Dr. Wieslawa Kozielewska-Trzaska has told the Forverts via email. “Nobody from the museum ever contacted me,” she wrote.

Kozielewska-Trzaska, an 80-year old physician in Gdansk, is the daughter of Karski’s brother as well as his goddaughter. Since Karski’s death in 2000 at the age of 86, she is Karski’s closest living relative and a spokesperson for the family. Karski’s wife, Pola, had passed away eight years before him and they had no children.

This isn’t the first time that Karski’s family wasn’t asked to attend an event honoring his legacy, she says. In 2012, President Barack Obama posthumously awarded the Presidential Medal of Freedom, the highest civilian honor awarded by an American president, to Karski. But instead of reaching out to one of Karski’s relatives to accept the medal, the Polish government had sent a former Polish foreign minister with Jewish roots, Adam Daniel Rotfeld, to accept the honor.

“Watching Polish TV, I learned that the Presidential Medal honoring Jan Karski was going to be presented at the White House to somebody from the Polish foreign ministry because ‘Karski had no family’. I was shocked,” his niece said.

There was also an incident in 2013, regarding a plan by the Polish Foreign Ministry to replace Karski’s gravestone, apparently without the family’s permission.

According to a press release from the Ministry of Foreign Affairs on November 30, 2012, Foreign Minister Radoslaw Sikorski declared that he would assume patronage over a new gravestone to Jan Karski and provide financial support to build it during a quiet wreath-laying ceremony at the grave of the WW II hero of the Polish Underground. “The project, overseen by an Honorary Committee set up for this purpose, is due to be completed in 2014, before the 100th anniversary of the birth of the legendary emissary of the Polish Underground State,” the release stated.

Kozielewska-Trzaska was dismayed by this. “A group of people unknown to the family, together with the Polish ambassador in the USA, tried to remove the gravestone chosen by Jan Karski himself,” she remarked. “They tried to explain it was authorized by the Polish foreign minister Radek Sikorski who also promised to pay for it from the ministry budget.”

“After my strong public protest, they stopped his action,” she added.

The question, as to whether these three incidents were somehow related, depends on whom you ask.

Piotr Kossobudsky, acting spokesman for the museum, told the Forverts: “As long as I don’t know the names of the Karski relatives claiming they should have been invited to the opening, I cannot confirm or deny the information [that] they were not invited,” he said. Invitations had been sent to more than 3,000 guests through a list created jointly by the museum, the Ministry of Culture and National Heritage, the Ministry of Foreign Affairs, the city of Warsaw, among others. About 2,100 people actually attended.

Although the museum was not aware of Jan Karski’s close living relatives, Kossobudsky claimed that this was in no way a reflection of the high regard the museum had for Karski himself.

“We couldn’t think of opening the core exhibition without recognizing his legacy and achievements,” he said, which is why the museum did invite representatives of the Jan Karski Educational Foundation (http.//www.jankarski.net/en).

The foundation, which is active both in Poland and in the US, receives funding from the Polish government and is one of several organizations and individuals who had nominated Karski for the Presidential Medal of Freedom.

Dr. Marek Jan Chodakiewicz, a Polish-American historian and author of the book After the Holocaust: Polish-Jewish Relations in the Wake of World War II, published in 2003, doesn’t believe that the snubs were intentional, but rather a sign of indifference. “I think it was typical bureaucratic callousness, first and foremost, on the part of the current government of Poland,” he said.

“The family felt snubbed because, according to them, ‘everyone’ knows that there were survivors of the Kozieleski family,” Chodakiewicz said. But in fact, the only ones who know this, he explained, are those from the pre-war elite milieu as well as the city officials of Lodz, Karski’s birthplace, where a local institution, the Museum of the City of Lodz includes a special Jan Karski Room, to which the family had contributed.

In fact, at the opening of another Jan Karski exhibit in Lodz, one of Karski’s cousins did attend the opening. The two-week exhibit, prepared by the Museum of Polish History (http://en.wikipedia.org/wiki/Museum_of_Polish_History), was housed in the elegant Poznanski Palace, and the official opening attracted many guests, including Jadwiga Lenoch-Bukowska, Karski’s then 101-year old cousin.

If so, why didn’t the Warsaw Jewish museum simply ask the Lodz municipality about any local surviving relatives, when compiling the guest list for the museum’s gala opening? Chodakiewicz believes it’s a sign of Warsaw’s cultural snobbery. “Poland remains hopelessly centralized, and the Warsaw center sneers, both intentionally and not, at the provincial localities,” he remarked.

“As for the latest development, regarding the Museum of Polish Jews, it is most likely politics,” he added. “Neither the Museum nor the government can claim ignorance anymore. In this instance, my guess would be that because the family had been outspokenly acerbic about a string of snafus, the powers that be became offended and snubbed them openly.”

Kozielewska-Trzaska thinks the snubs were indeed intentional – a result of a certain ambivalence towards Karski among the Poles. “Probably he was too painful for the Polish people because he openly criticized Polish anti-Semitism as well as those Poles who chose the role of bystanders during the Holocaust,” she said. “Also, he identified himself as a spiritual Jew and described the day of honoring him by the citizenship of Israel as one of the most beautiful days in his life”.

Kozielewska-Trzaska was apparently referring to the day in June 1982 when Karski was recognized by Yad Vashem as one of the Righteous Among the Nations.

Jacek Wozniak, secretary of the Jan Karski Society created shortly after Karski’s death a non-government organization based in Lublin , Poland, says Kozielewska-Trzaska is not off the mark.

“Karski’s voice against Polish anti-Semitism was very strong and very clear. No doubt, many Poles could feel uncomfortable with it. Karski was attacked for his true statements very often. His opinion on Polish society during WW II was critical and far from heroic legend. He was not a legend-teller.

“For legend-lovers this is not a good message,” Wozniak added.

Karski was also controversial for other political reasons, Chodakiewicz points out. “Initially, he saw himself as a Polish freedom fighter and his effort on the behalf of the Jews was subsumed in a general mission of the underground courier,” he explained. After the war, however, Karski found himself on the losing anti-Communist side; as a result, he had to leave Communist Poland, and so his heroic efforts against the Nazis weren’t publicly recognized.

It wasn’t until Eli Wiesel discovered Karski and credited him for informing the world about the Holocaust, that Karski began increasingly to embrace that side of the mission. International recognition followed.

After a while, Karski began to sound “like the New York Times and other outfits that are singularly biased” for not allowing an open debate about the question of anti-Semitism in Poland, Chodakiewicz said. “No surprise then that the majority of observers concluded that Karski simply joined the anti-Polish chorus.”

Despite his controversial image, Chodakiewicz defends Karski for his braveness and for facilitating a vigorous debate on the failings of his compatriots, in particular regarding Polish-Jewish relations.

Kossobudzki, the museum spokesman, says that today’s debates about Karski are understandable, when placed in context. “Please keep in mind, that Poland regained democracy and freedom of speech only 25 years ago. Jews are back on the agenda only since then – with all the issues that entails: who saved them; who betrayed them; Karski and Jedwabne… And of course it’s always easier to pay tribute to heroes than to confess that Poles did horrible things.”

The good news, is that both messages are now part of the public dialogue, Kossobudzki says. Today, “Poland’s highest officials are openly involved in events and institutions telling all aspects of Polish-Jewish history.”