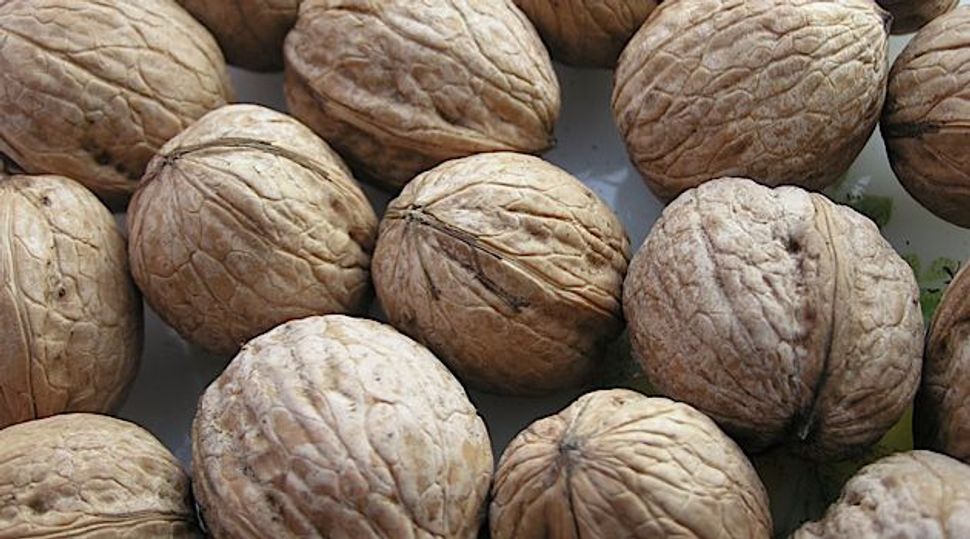 Artist’s Rendering of Rabbi Tarfon’s Mind: It was said in the Talmud that the rabbi was ‘a heap of walnuts.’ Image by Getty images

Forward reader David Wexler calls my attention to an article in the October 10 issue of this newspaper about Greg Wall, a saxophone-playing, shofar-blowing, Talmud-teaching rabbi from Norfolk, Connecticut. “In addition to being a Talmud khokhem, or smart man,” the article’s author, Jon Kalish, wrote, “Wall… knows a mainsail from a jib, having taught at sailing schools in New York and New Jersey.”

What’s wrong with this? Two things. To begin with, the Yiddish expression is not “Talmud” khokhem but talmid kokhem (with the stress on the words’ first syllables), from the Hebrew talmid ḥ akham (with the stress on the last syllables). And second, the expression does not mean “a smart man.” It means, literally, “a pupil [talmid] of a rabbinical scholar [ḥ akham],” and it denotes a learned Jew, someone who is such a scholar himself.

Kalish shouldn’t be overly blamed for his mistake, because — apart from the Talmud/talmid confusion — it’s a common one, sometimes made even by people who know Yiddish or Hebrew, though not Jewish tradition, well. It’s an understandable one, too, since if you take Hebrew ḥ akham to be an adjective meaning smart or wise, which is what it generally is, talmid ḥ akham would translate as “a smart [or “wise”] pupil.” However, in this expression ḥ akham is not an adjective but a noun, the giveaway being the expression’s plural form. If talmid ḥ akham meant “a wise pupil,” the plural would be talmidim ḥ akhamim, “wise pupils.” But in fact it’s talmidey ḥ akhamim, a genitive construction that would normally, in contemporary Hebrew, mean “pupils of the wise.” Yet in the language of the Talmud and subsequent rabbinic literature, the noun ḥ akham, as we have said, most often refers not just to anyone who is wise, but specifically to a rabbinic sage.

The distinction in the Talmud between a rav or rabbi and a ḥ akham is one of degrees of knowledge. Although every ḥ akham is a rav, not every rav is a ḥ akham. Thus, a passage in the tractate of Gittin says that the late second- and early third-century rabbi Isi ben Yehuda ranked the sages [ḥ akhamim] as follows: “Rabbi Meir was a sage [ḥ akham] and a Torah scribe. Rabbi Yehuda was a sage when he wished to be. Rabbi Tarfon was a heap of walnuts. Rabbi Yishma’el was a store stocked with everything. Rabbi Akiva was a secret treasure. Rabbi Yochanan ben Nuri was a peddler’s box. Rabbi Elazar ben AzarIiah was a spice box.” All these ḥ akhamim, in other words, were more than ordinary rabbis, but not all were on the same level. Rabbi Yehuda was not consistently reliable in his opinions; Rabbi Tarfon was not well organized (ask for his opinion on something, and everything tumbled out like a pile of nuts when one is removed); Rabbi Yishma’el could answer any question put to him; Rabbi Akiva knew even more but did not easily reveal it, etc.

In effect, nearly all the rabbis whose opinions are cited in the Talmud were considered ḥ akhamim, since rabbis of lesser stature were not worth mentioning. This is why, though the terms rav and ḥ akham were not originally synonymous, the rabbis of the Talmud are known collectively as ḥ azal, an acronym for ḥ akhameynu zikhronam livrakha, and “Our sages of blessed memory.” And gradually, the title ḥ akham did become synonymous with rav in much of the Jewish world, particularly among Sephardic and Middle Eastern Jews. In Ladino, the Judeo-Spanish of the Balkans, Greece and Turkey, haham came to mean any Sephardic rabbi, while rav designated an Ashkenazi one. It came to be the Turkish word for “rabbi,” too, and when, in 1835, it was decided for administrative reasons to appoint a chief rabbi for the entire Ottoman Empire, the title given him was hahambaşi (with the ş pronounced as “sh”), baş being the Turkish word for “chief” or “head.”

In the course of time, the Ottomans appointed local hahambaşis in a large number of cities under their rule, including Jerusalem, Alexandria, Baghdad, Mosul, Damascus, Aleppo and Sana’a. Since these appointments were political, the hahambaşi was not necessarily a ḥ akham in the talmudic sense, and the pomp of his office was sometimes greater than the learning he brought to it. In 19th-century Jerusalem, the hahambaşi wore an embroidered gown and blue turban and was preceded everywhere he went in public by a uniformed valet bearing an ivory-tipped scepter that was tapped against the sidewalk to announce his approach.

The Jerusalem hahambaşi was also known as the rishon l’Tsiyon, “the foremost in Zion,” and when British rule replaced Turkish rule in Palestine, he acquired the title of chief Sephardic rabbi, the British having created the countervailing position of chief Ashkenazi rabbi as well. Although the valet and scepter have been relegated to history along with the Turkish title, the gown and turban go with the job to this day and may be worn after retirement. The late rabbi Ovadia Yosef, who became chief Sephardic rabbi in 1973 and continued to reign as a religious and political leader of Israel’s Sephardic community after he left the post 10 years later, was rarely seen in public without them until his death last year. Although he was not, in my opinion, a very wise man, he was certainly a great talmid ḥ akham.