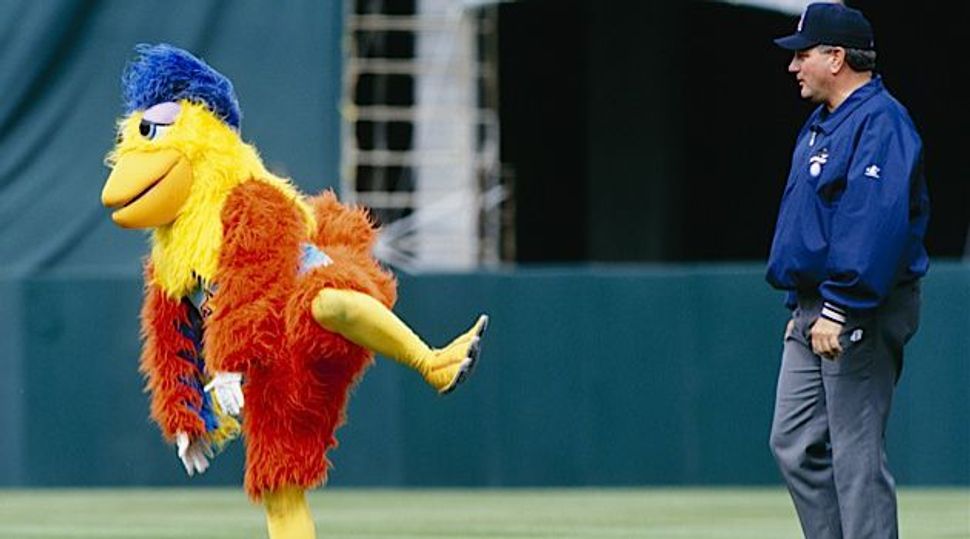 Poultry Evidence: The famed San Diego Chicken demonstrates a literal demonstration of the phrase in question. Image by Getty images

A number of you have written to correct my November 14 column on the use of the word “chickensh–” by an anonymous White House official, in talking to The Atlantic magazine, to describe the Israeli prime minister, Benjamin Netanyahu. The correctors all make the same point: I was wrong in thinking that “chickensh–” meant cowardly. “I’m old enough to know the difference between ‘chicken’ and ‘chickensh–,’” Gerald Taylor writes. “I’m not so sure about you, though. ‘Chicken’ clearly means a coward. ‘Chickensh–’ means insignificant. I don’t know which appellation would disturb Netanyahu more, but somebody ought to ask him.”

Robert Cotton, Judith Ronat and Arnold Stern all agree. Mr. Stern, for example, observes: “Chickensh– was used in the army during World War II to describe officious officers and orders that were petty and sometimes meaningless. It had nothing in common with being called ‘chicken.’”

This is clearly not a chickensh– matter. Allow me to defend myself.

Having been a boy who participated joyously in the great American sport of profanity (not all languages take the same pleasure in this pastime), I can assure Mr. Taylor that I am well aware that “chickenshit” commonly means petty or insignificant. As a matter of fact, this is the only sense in which I myself have ever used it or heard it used. Nevertheless, I stick to my opinion that in The Atlantic it meant cowardly. I have three reasons for doing so.

Reason 1 is the context in which the word appeared. Here, again, is the anonymous official’s remark:

“The thing about Bibi is, he’s a chickensh–. The good thing about Netanyahu is that he’s scared to launch wars. The bad thing about him is that he won’t do anything to reach an accommodation with the Palestinians or the Sunni Arab states…. He’s got no guts.”

Reason 2 can be found on page 399 of my 1991 Random House Historical Dictionary of American Slang. (Unfortunately, this impressive work of scholarship does not extend beyond the letter “O,” its third and last volume having never been published.) After defining “chickensh–” as “insignificant, contemptible, worthless,” it gives a second meaning of “cowardly,” followed by many citations. Two of them, Arnold Stern may be surprised to find out, come from World War II. One is from Norman Mailer’s celebrated 1948 war novel. “The Naked and the Dead,” in which a soldier berates a frightened buddy: “What’s the matter? You going chickensh–?”

The latest of the citations provided by the dictionary dates to the year of its publication. Clearly, “chickensh–” did and does mean cowardly to quite a few Americans. Perhaps this is a regionalism that exists only in certain areas, in none of which I or my correspondents grew up. In any case, the anonymous White House official was familiar with it.

Reason 3 has to do with the English indefinite article “a,” as in The Atlantic’s “He’s a chickensh–.” Hands on your hearts, Messrs. Taylor, Cotton, Ronat and Stern: Have you ever heard “chickensh–” in the sense of insignificant used as a noun preceded by an article in this fashion? Have you ever heard anyone call something insignificant by saying, “That’s a chickensh–” rather than “That’s chickensh–,” or “That’s a chickensh– affair,” or “That’s chickensh– thinking,” or the like? “If you have, you should alert the Historical Dictionary of American Slang just in case it’s ever finished and republished, because in the 25 citations it gives for “chickensh–” when it means insignificant, ranging from 1934 to 1990, the word appears every single time as an adjective and in all but three or four cases as an adjective followed by the noun it modifies. For instance, “God couldn’t give a damn less about all these little chickensh– details.” Or, “Don’t go breaking any of the chickensh– little rules.” Or, “What a chicken sh– (sic) place!” Or, “Well, that’s the old chickensh– army.”

“Chicken” is commonly a noun, although it’s often an adjective, too. If I say, “He’s a chicken,” it’s the former; this can be paraphrased as “He’s a coward.” If I say, “He’s chicken,” on the other hand, it’s the latter, and the correct paraphrase is, “He’s afraid.” “Chickensh–” in its second definition, according to the Historical Dictionary of American Slang, follows the same pattern. And like “chicken,” which yields the verb “to chicken out,” it has a verbal form, too. The dictionary cites actor Steve McQueen saying in a 1971 issue of Playboy (apparently in reference to a motorcycle competition): “I chickensh–ted on the second turn. I just didn’t have the balls.”

And here my case rests. The White House official was not calling Netanyahu insignificant. He was calling him a coward in a particularly taunting, belligerent way. His own words, the Historical Dictionary of American Slang, and American English usage as we know it are my witnesses.