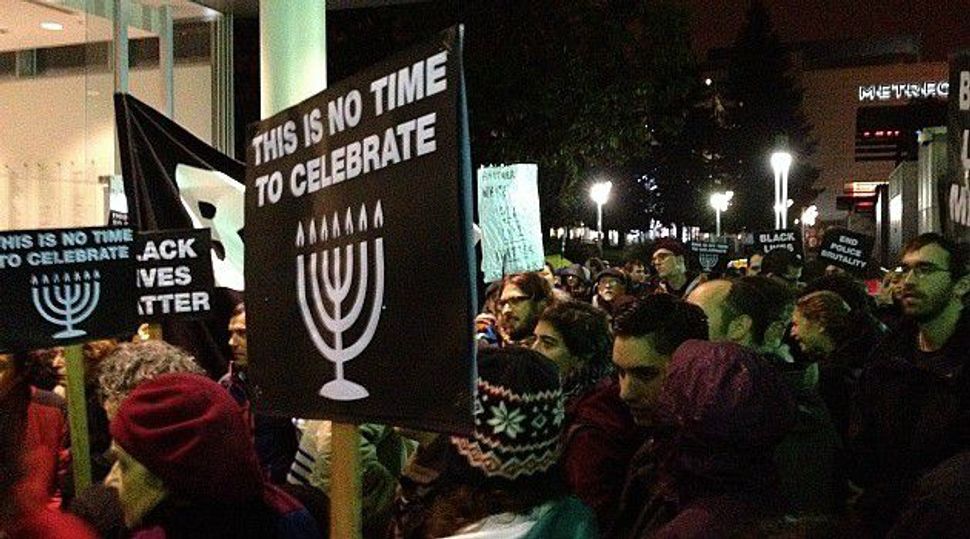 No Silence: Jewish activists carried out nationwide protests against racism and police brutality on Hanukkah. After the murders of two police officers, they insist they will not stop speaking out. Image by hannah rubin

Rabbi Sharon Kleinbaum was observing the Sabbath on December 20 when New York police officers Wenjian Liu and Rafael Ramos were shot and killed in their patrol car in Brooklyn by 28-year-old Ismaaiyl Brinsley, who then took his own life.

After sundown, Kleinbaum, who leads New York’s Congregation Beit Simchat Torah and has been an active Jewish voice in the Black Lives Matter movement rolling across the country, posted on her Facebook page, “Praying for the families of the two policemen who were shot and killed tonight in a horrible act of murder.”

Kleinbaum, a vocal critic of police brutality over the past several months, urged congregants, “Let us all bring flowers with a note to our local precincts — now is the time to be expressing deep condolences and create the bridges to help heal our city.”

Two days later, Kleinbaum, along with a dozen other Jewish community members, lit menorahs with local police at the NYPD Traffic Control Division in Manhattan. It was the seventh night of Hanukkah, and community members brought a box of jelly donuts for the holiday, along with a pile of colorful condolence cards written by children from the synagogue. 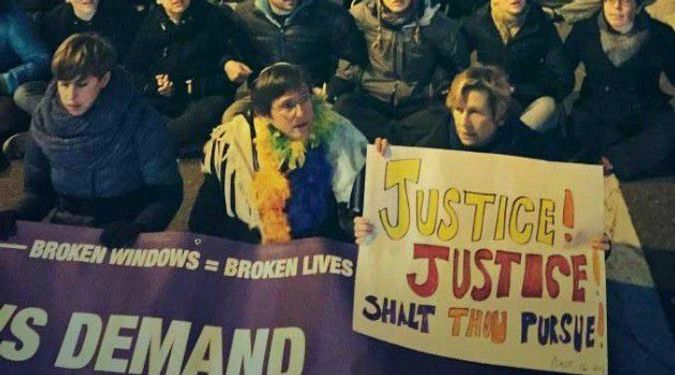 The police seemed moved, Kleinbaum said, and though no officers knew Hebrew, they lit the candles as the blessings were sung.

Rabbi Jill Jacobs, who was willfully arrested along with Kleinbaum and other Jewish activists on December 4 during a demonstration against police brutality, chatted with the officers. “Yes, I’m a protester,” Jacobs, executive director of the rabbinic human rights group T’ruah, said she told them. “I’ve been arrested. But we’re in this together.”

Kleinbaum and Jacobs are among a handful of Jewish activists involved in the Black Lives Matter movement, as it is sometimes called, a loose coalition calling for police accountability and reform following a spate of widely noted deaths of unarmed black men and women at the hands of police.

The protests coalesced around the cases of Michael Brown in Missouri and Eric Garner in New York, both of whom were unarmed and black, and died as a result of their interactions with police officers. The protests gained momentum and intensity following the decisions reached by two separate and respective grand juries not to indict the police officers involved in each of those cases.

The murder of Ramos and Liu was, judging from posts on Brinsley’s Instagram account, perceived by the killer as an act of revenge for the deaths of Garner and Brown. Brinsley posted a picture of his gun before the shooting. He captioned the image, “They Take 1 Of Ours … Let’s Take 2 of Theirs,” and named both Garner and Brown. “I’m Putting Pigs In A Blanket.”

Jacobs, Kleinbaum and other Jewish activists unanimously condemned the Brooklyn shooting. Murder of any kind, they stressed, violated their religious principles. But some worried that comments by Patrick Lynch, head of the NYPD Patrolmen’s Benevolent Association, and NYPD Commissioner Bill Bratton after the murder of the two officers will make it harder for the public to hear the nonviolent message they support.

Lynch, standing outside Woodhull Medical Center, where Ramos and Liu were taken on the day of the shooting, told reporters, “There is blood on many hands, from those that incited violence under the guise of protest to try to tear down what police officers did every day.”

Bratton called the police killings a “direct spinoff” from the protests. A video showing what appears to be a group of hundreds chanting for the death of police (“What do we want? Dead cops! When do we want them? Now!”) was widely circulated.

The Jewish activists emphasized the nonviolent approach of the national movement notwithstanding several such instances in which small groups of protesters called for violence.

“There is no reason that this senseless act of murder should prevent us from having a complicated, but important, conversation about how police do their jobs,” said Rabbi David Rosenn, executive vice president of the New Israel Fund. “I believe we can do that, especially New Yorkers. We’re good at complexity. People have a right to be angry. But the bigger picture requires that we translate that anger not into violent or destructive takedowns, but instead into conversations and actions that will change broken systems.”

Rosenn was arrested alongside Jacobs and Kleinbaum in the December 4 demonstration, which T’ruah organized along with Jews for Racial and Economic Justice.

Rabbi Susan Talve, who lives in St. Louis, 10 minutes away from where Brown was shot and killed in August, has been a longtime critic of police brutality. She said she understands the need for mourning, and that she respected Mayor Bill de Blasio’s call for a moratorium on protests in New York until the funerals of the two officers are held. But for Talve, the death of the two policemen does not mean the protest movement should alter course.

“I’m so sorry for the families of the police officers,” she said in a phone interview from St. Louis. “This is all the more reason to protest for all the changes we are hoping for. Especially in the Jewish community, we need to get this. Anyone who has known otherness, who has been profiled, should get this. We know what it is to be profiled.”

Talve urged a wider viewpoint. “We need to be looking at all of the broken systems that are causing violence in our culture,” she said. “Why was [Brinsley] arrested 19 times? Why was he on the street? How do we treat our mentally ill, our poor?”

Rabbi Mordechai Liebling, director of the Social Justice Organizing Program at the Reconstructionist Rabbinical College, called the murder of the two police officers “a tragic event.”

“Two men of color were assassinated,” he noted. “It was done by a lone, mentally imbalanced man, not connected to any organization. It was done out of personal desperation.

Liebling reflected, “Wisdom is always rooted in paradox. Religion teaches us to hold the light and the dark together. We can challenge institutional racism and condemn the killing of these two police officers at the same time.”

On the night of December 23, Liebling joined a demonstration of around 150 Jews in Philadelphia coinciding with the final night of Hanukkah. Leibling emphasized that the killing of two police in Brooklyn did not give him pause on whether to move forward with demonstrations. “We cannot allow this to be used to squash a popular, national movement.”

At the event, which lasted half an hour, condolences were offered to the families of Liu and Ramos, eight Hanukkah candles were lit, and the names of men and women of color killed by police were read aloud.