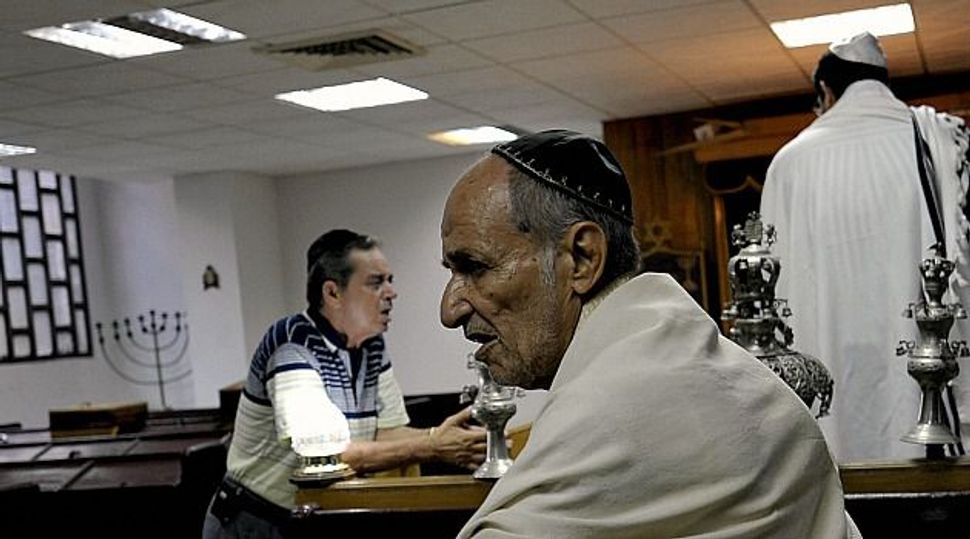 New Normal: Cuban Jews worship at the Adath Israel congregation in Havana. The island’s community is poised for dramatic change now that relations with the U.S. are being normalized. Image by getty images

Fidel Castro has died at age 90. The former Cuban strongman was nothing if not a controversial figure — a socialist hero to some, a heartless dictator to many others.

His relationship to the island’s small Jewish community — now just 1,500, down from a peak of 15,000 — was also far from clear-cut. On the one hand, Jews suffered as much as any — perhaps more — from the isolation and economic problems on the island during his decades of rule. But on the other, the aetheist leader protected the community against anti-Semitism and made special dispensations for Jewish religious practice.

After decades of embargo and conflict, President Obama moved in 2014 to normalize relations with Cuba.

How did Cuba’s dwindling Jewish community survived his rule — and can they hope for better days ahead? Cuba scholare Ilan Stavans offered some answers in this report.-—Dave Goldiner

How fast will the future come to Cuba? Right now, the feeling is similar to the emotions that swept Eastern Europe in 1989, immediately after the fall of the Berlin Wall: Communism is crumbling before our eyes. It’s only a matter of time before corporate ambassadors like WalMart and McDonald’s redraw this minuscule island.

With the thunderclap announcement of restored ties on December 17 between Washington and Havana after 53 years, the last vestige of the Cold War appears to have expired. Now, change is coming to a society that has had little experience with it, at least since the Revolution that altered everything for good and for ill in 1959. The hulking 1950s DeSotos, Fords and Plymouths that ply Havana’s streets, held together with refurbished parts and prayers, are already residues of a distant past, but still present. As the longstanding U.S. trade embargo gets rolled back, they soon will be just relics.

I have been interested in the island’s Jewish life for decades, and I’m eager to see to how this community will be transformed over the next few years. Depending on its shape and extent, that transformation may usher in a different type of future. 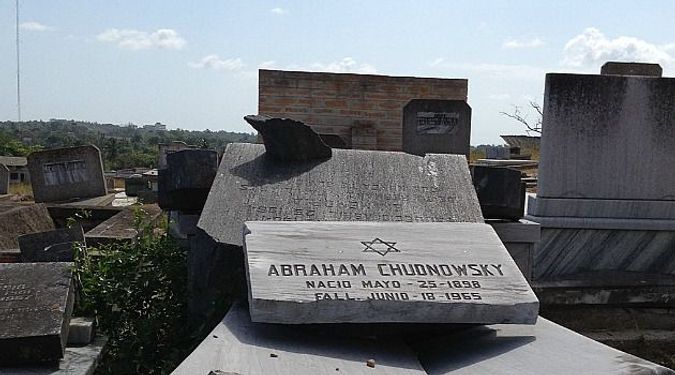 Thanks to its strategic position in the Caribbean, Cuba has forcenturies been an economic, social and cultural gateway, a port of arrival and transit for European merchandise to the Americas. As part of the Spanish Empire, from the early colonial period it was also a destination for New Christians — Sephardic Jews who converted to Christianity under the Spanish Inquisition. Conversos, Jews who continued to secretly practice Judaism after their conversions, were also part of the bunch. In 2013, Leonardo Padura, one of Cuba’s best-known intellectuals, published an ambitious novel, “Herejes” (“Heretics”), to some extent about Jewish apostasy and the Spanish Inquisition on the island.

Much later, in the late 19th century, a Yiddish-speaking Ashkenazi immigration wave arrived, making Havana a hot spot of literary, artistic and musical exchanges. In the 1930s and ’40s, more European Jews came, in flight from the Nazis, even as America shut its doors to them.

By the time Fidel Castro toppled the government of Cuban dictator Fulgencio Batista in January 1959, the Jewish community was thriving, not only in Havana but also in other cities such as Santiago de Cuba and Camagüey. As El Líder’s determination to transform Cuban society along communist lines became clear in the years that followed, fear spread like wildfire that the government would take possession of large and small business. It set off an exodus of tens of thousands of middle-class Cubans, including many Cuban Jews, to Miami and elsewhere.

Yet Cuba’s Jewish life didn’t perish. It survived, albeit radically shrunken, through several decades during which the public practice of all religions was prohibited. The tiny communities dotting the island continued in many cases as Jewish cultural associations. In this, they were aided by the fact that the government neither sponsored nor supported anti-Semitism — as distinct from the anti-religion policies that affected everyone.

Even the government’s official anti-Zionism was a muted affair in comparison with the obsession it became in Venezuela under Hugo Chávez. Under Castro, Cuba continued to maintain official relations with Israel even after the 1967 Six Day War, when most of the rest of the communist world cut ties with Jerusalem. Cuba cut those ties only after the Yom Kippur War, in October 1973. But Israeli tourists have long visited Cuba freely, and Cuban artists and intellectuals have visited Israel regularly.

Through the island’s arid decades of Soviet communist domination, intermarriage rates within Cuba’s small Jewish population rose enormously. But a remarkable phenomenon developed in parallel with this: Instead of the intermarried Jews assimilating, many of the non-Jewish partners and their children retained their ties to the modest Jewish bastions that persisted.

When Cuba changed its constitution in 1992 to allow the open practice of religion and public places of worship, a steady stream of conversions began as these non-Jewish partners and their offspring formalized their ties with Cuban Jewry. Meanwhile, aid from Jews in the Diaspora continued to arrive unimpeded during the years before and after this change, giving the community a modest pillar of support. This aid was especially crucial when severe austerity hit the island with the fall of the Iron Curtain in 1989 and the sharp drop in economic support to Cuba from the Soviet Union and other Eastern Bloc countries that followed. 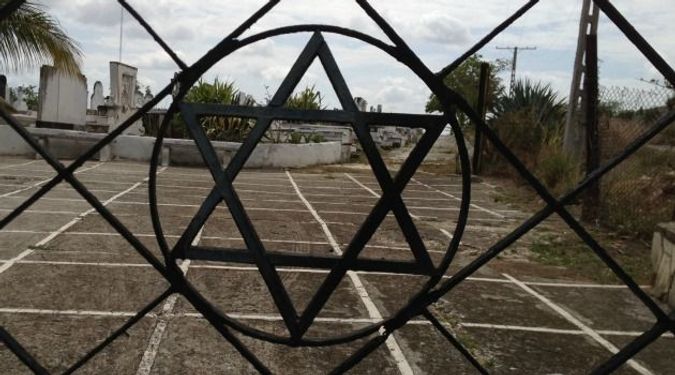 One of the fascinating aspects of Cuba through all this is the way it has managed to constantly reinvent its own future without actually changing. I recently talked to Yoss — the literary pseudonym of José Miguel Gómez Sánchez, the island’s most popular science fiction writer. His work, in his own words, is about “how things are always about to happen here, though they never actually do.” “A Planet for Rent,” a series of stories by Yoss inspired by Ray Bradbury’s “The Martian Chronicles,” features in comedic form an assortment of Cuban stereotypes.

“The normalization of U.S.-Cuban diplomatic relations was something three generations of Cuba kept on waiting for without much faith,” Yoss told me. “Now it is a reality and nothing will ever be the same…. There will be embassies, remittances will increase, Yanqui tourists will be able to import rum and cigars. A better, improved paradise is about to be built in the months to come.”

Sardonically, Yoss added: “Without the blockade, who will Cuba blame for its economic inefficiency? What will we do without the United States as a scapegoat?” Yoss predicted “the beginning of the end” for Cuban communism.

“Our island will be for sale and we’ll hand it to the best buyer,” he said. “Spanglish will be spoken here from now on. The state-run monopolistic capitalism we now have is likely to give place to a simpler form of capitalism, more efficient but also more barbaric.”

But Ruth Behar, a Jewish Cuban-American anthropologist who teaches at the University of Michigan, is less bleak about the consequences of normalized relations.

The Cuban people’s “endurance and resourcefulness… as well as their spirit of independence” will enable them to resist Americanization, she wrote me in an email.

Behar, whose 2002 documentary “Adio Kerida” chronicled her longing for the Cuba she left behind when her family fled to the United States, believes that many Cuban Jews in Miami want to return now to invest in and rebuild the island’s infrastructure. Moreover, this “new flow of people, ideas and money” will help to re-energize Cuba’s Jewish community, she said.

“Synagogues and Jewish cemeteries around the island will be repaired,” she predicted. “Jewish elders will receive additional care and attention. And most importantly, if economic prospects improve, Jewish youth will be motivated to stay in Cuba, rather than making aliyah to Israel, or trying to immigrate to the U.S.”

This might be the most dramatic change. From it may emerge a significant new Jewish community closely tied to the United States.

Like the hound that didn’t bark in Arthur Conan Doyle’s Sherlock Holmes tale, one silence amid the recent revolutionary events spoke loudly. After a phone summit between presidents Barack Obama and Raúl Castro, and the joint announcement that was followed by an exchange of prisoners, not a single public word was heard from Fidel, a man famous for his unending verbiage. Perhaps this silence, more than anything else, is a sign that a different kind of future has irrevocably arrived. Fidel Castro is known to be ill, but so is Cuba. Only one of them is showing signs of recovery, which is proof that a new revolution is underway.

Ilan Stavans is the Lewis-Sebring Professor in Latin American and Latino Culture at Amherst College. His latest book is “A Most Imperfect Union: A Contrarian History of the United States” (Basic Books, 2014).