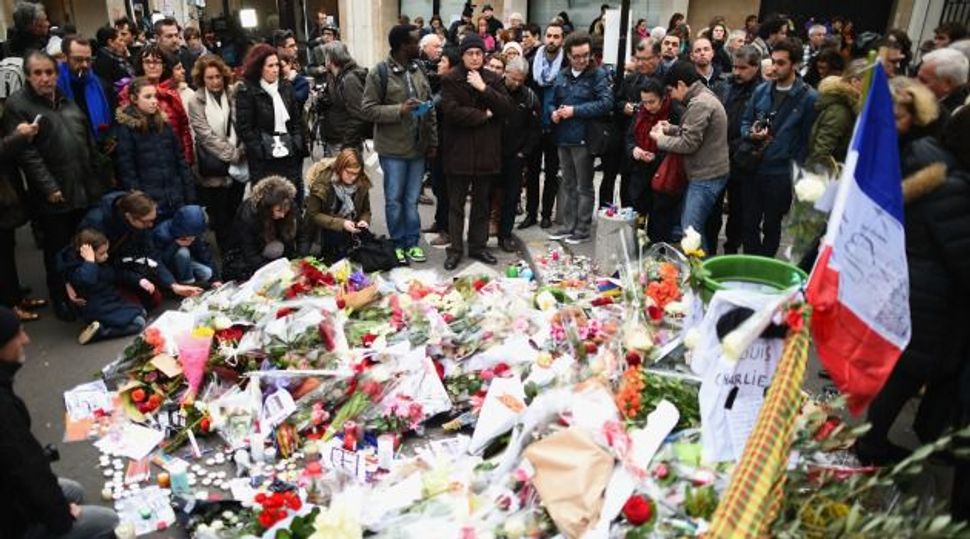 Nation Grieves: Crowds gather around a makeshift memorial to the victims of the terror attack on a Paris kosher grocery store and the earlier attack on Charlie Hebdo magazine. Image by getty images

(Reuters) — France mourned the the victims of the terror attack on a Paris kosher grocery as police searched for a female accomplice to militant Islamists and maintained a top-level anti-terrorist alert ahead of nationwide anti-terror marches set for Sunday.

Prime Minister Manuel Valls urged a massive turnout on Sunday. Tens of thousands flocked to local vigils on Saturday, with 80,000 in Toulouse and 30,000 in the Riviera city of Nice and a similar number in Pau in the southwest.

In the worst assault on France’s homeland security for decades, 17 victims lost their lives in three days of violence that began with an attack on the Charlie Hebdo weekly on Wednesday and ended with Friday’s dual sieges at a print works outside Paris and a kosher supermarket in the city. 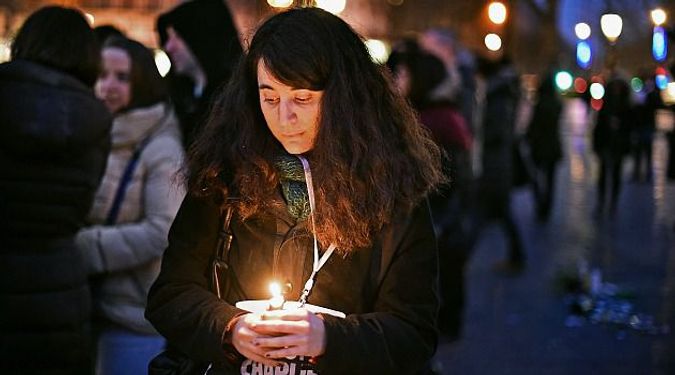 French security forces shot dead the two brothers behind the Hebdo killings after they took refuge in the print works, and a Kalashnikov-armed associate who had planted explosives at the Paris deli in a siege that claimed the lives of four hostages.

The four victims killed in the terror attack on a kosher shop in the French capital were all Jews, the CRIF umbrella group of French Jewish communities said.

On Saturday, there was still a visible police presence around the French capital, with patrols at sensitive sites including media offices. There was a false bomb alert at the Eurodisney fairground to the east of the capital.

“It’s no longer like before,” said Maria Pinto, on a street in central Paris. “You work a whole life through and because of these madmen, you leave your house to go shopping, go to work, and you don’t know if you’ll come home.”

The attack on Charlie Hebdo, a journal that satirized Islam as well as other religions and politicians, raised sensitive questions about freedom of speech, religion and security in a country struggling to integrate a five-million Muslim minority. 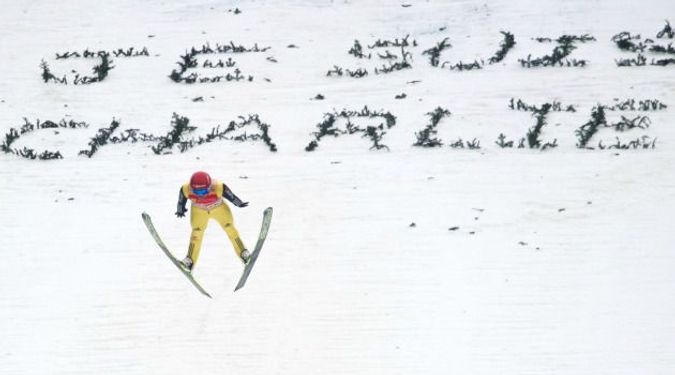 A skier jumps over a solidarity message for the victims of the Paris terror attack at the Nordic Combined World Cup in the French Alps town of Chaux-Neuve. Image by getty images

The whereabouts of the partner of the Jewish deli attacker, 26-year-old Hayat Boumeddiene, remained unknown. Police listed her as a suspect in that strike and an earlier killing of a policewoman, describing her as “armed and dangerous.”

A source familiar with the situation said that Boumeddiene left France last week and traveled to Syria via Turkey.

“On January 2, a woman corresponding to her profile and presenting a piece of identity took a flight from Madrid to Instanbul,” a source familiar with the situation told Reuters.

The source said she was accompanied by a man and had a return ticket for January 9, but never took the flight. He said that Turkish authorities have signaled that she passed the border with Syria on January 8. 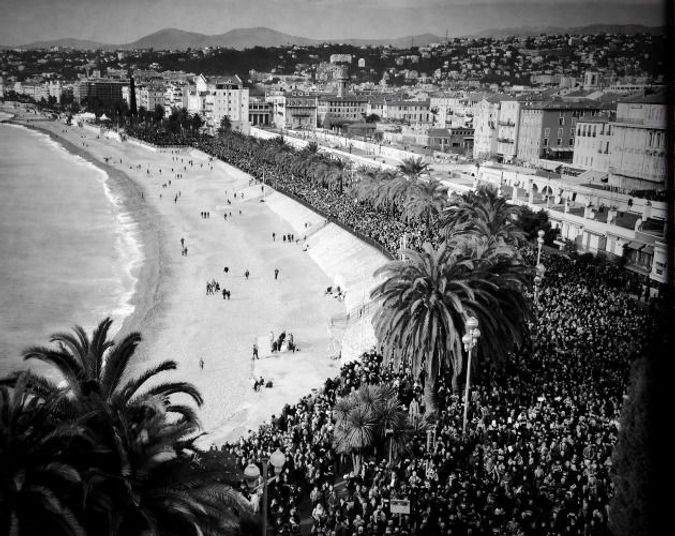 A black-and-white image shows thousands rallying in the French Riviera city of Nice to mourn the victims of this week’s terrorist attacks in Paris. Image by getty images

“All our services are focused on looking for this person,” national police chief Jean-Marc Falcone told BFM-TV television. “We call on her to put herself in the hands of justice.”

An official police photograph shows a young woman with long dark hair hitched back over her ears. French media, however, released photos purporting to be of a fully-veiled Boumeddiene, posing with a cross-bow, in what they said was a 2010 training session in the mountainous Cantal region.

French media described her as one of seven children whose mother died when she was young and and whose delivery-man father struggled to keep working while looking after the family. As an adult, she lost her job as a cashier when she coverted to Islam and started wearing the niqab. 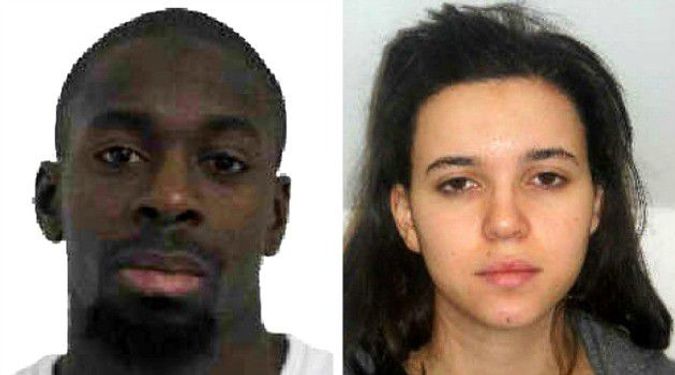 Le Monde said Boumeddiene wed Amedy Coulibaly in a religious ceremony not recognized by French civil authorities in 2009. The two were questioned by police in 2010 and Coulibaly jailed for his involvement in a botched plot to spring from jail the author of a deadly 1995 attack on the Paris transport system.

“French people need to know that all measures will be taken for this demonstration to be held in a spirit of mourning and respect, and in full security,” Interior Minister Bernard Cazeneuve said after an emergency cabinet meeting.

“Given the context, we remain at risk and we will maintain the highest level of security in comings weeks.”

Political and security chiefs were reviewing how two French-born brothers of Algerian extraction could have carried out the Charlie Hebdo attacks despite having been on surveillance and “no-fly” lists for many years.

Paris chief prosecutor Francois Molins said late Friday the three men killed on Friday in the two security operations had had a large arsenal of weapons and had set up booby traps. They had a loaded M82 rocket launcher, two Kalashnikov machine guns and two automatic pistols on them.

With one of the gunmen saying shortly before his death that he was funded by al Qaeda, Hollande warned that the danger to France – home to the European Union’s biggest communities of both Muslims and Jews – was not over yet. 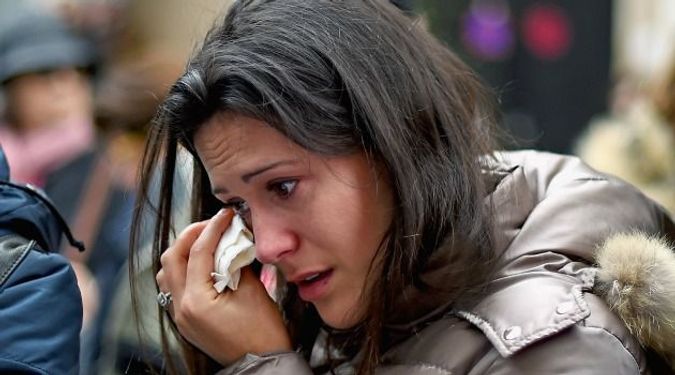 “These madmen, fanatics, have nothing to do with the Muslim religion,” Hollande said in a televised address.

“France has not seen the end of the threats it faces,” said Hollande, facing record unpopularity over his handling of the economy but whose government has received praise from at least one senior opposition leader for its handling of the crisis.

An audio recording posted on YouTube attributed to a leader of the Yemeni branch of al Qaeda (AQAP) said the attack was prompted by insults to prophets but stopped short of claiming responsibility for the assault on the offices of Charlie Hebdo.

Palestinian Islamist militant group Hamas in a statement condemned the strike as an unjustifiable terrorist attack. 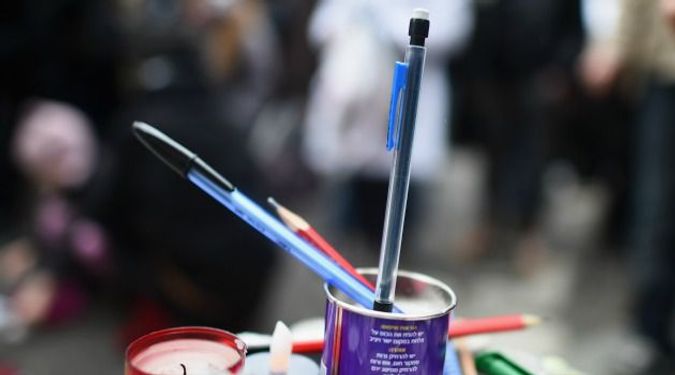 It emerged that a person initially thought to have been held hostage by the brothers Cherif and Said Kouachi had in fact hidden himself inside the print words. He emerged unhurt.

Before his death at the printing works, Cherif Kouachi told a television station he had received financing from an al Qaeda preacher in Yemen.

“I was sent, me, Cherif Kouachi, by Al Qaeda of Yemen. I went over there and it was Anwar al Awlaki who financed me,” he told BFM-TV by telephone, according to a recording aired by the channel after the siege was over.

Al Awlaki, an influential international recruiter for al Qaeda, was killed in September 2011 in a drone strike. A senior Yemeni intelligence source told Reuters that Kouachi’s brother Said had also met al Awlaki during a stay in Yemen in 2011.

Molins said there had been “sustained” contact between Boumeddiene and the wife of Cherif Kouachi, with records of no fewer than 500 phone calls between the two last year. The wife of Kouachi is being questioned by French police.

Coulibaly had also called BFM-TV, to claim allegiance to Islamic State, saying he wanted to defend Palestinians and target Jews. He said he had jointly planned the attacks with the Kouachi brothers, and police confirmed they were all members of the same Islamist cell in northern Paris. 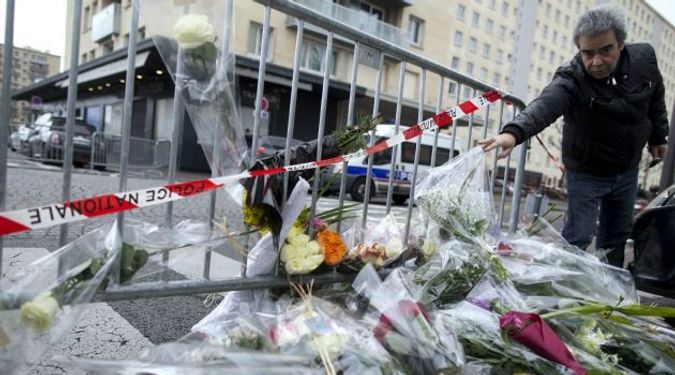