Inside the Heads, Hearts and Yarmulkes of Jewish Cops 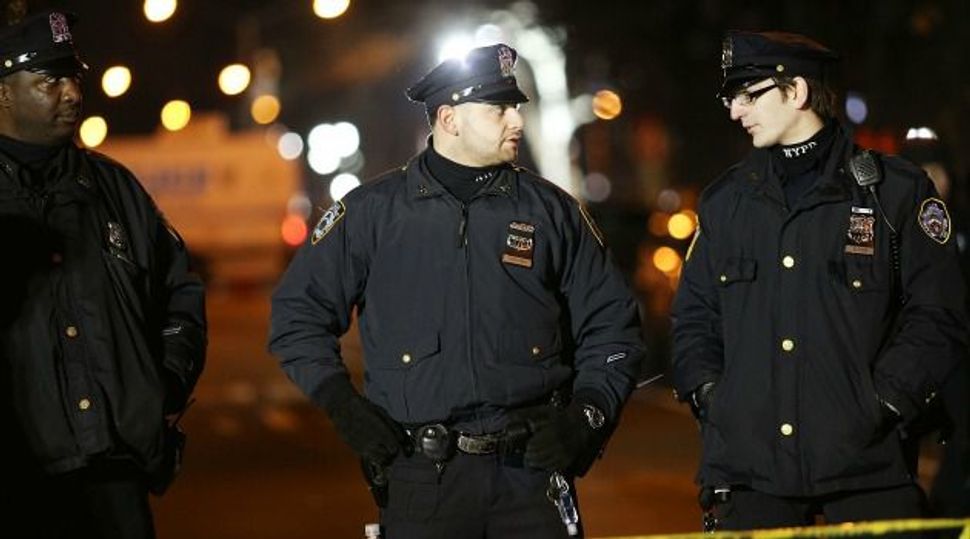 Men in the Middle? New York police officers guard scene after two colleagues were shot execution-style by a man who spewed anti-police rage. How do Jewish cops deal with the rift between the men in blue and some of the communities they patrol? Image by gettyimages

Rabbi Gary Moskowitz served on the New York City Police Department for nearly a decade, during which he worked as an undercover narcotics cop and patrolled Times Square. Still, he says that many people could never fully grasp the idea of a Jewish police officer.

Moskowitz remembers chasing down a mugger near Columbus Circle in Manhattan and wrestling him to the ground. A passerby did a double-take when he saw Moskowitz, an observant Jew who wears a skull cap, handcuffing the thief.

“What is that? What are you wearing on your head?” Moskowitz remembered the passerby asking. “This?” Moskowitz asked, pointing to his yarmulke. “It’s the new summer police uniform,” Moskowitz deadpanned. “No, of course,” he said after a beat, “it’s a yarmulke.”

“People don’t look at Jews as being forces of change,” Moskowitz said, “as being strong like that.”

While some Jewish groups have taken to the streets as part of the Black Lives Matter movement, denouncing police brutality and racism, there are thousands of Jews who belong to that police force, in New York and across the country. Paradoxically, both cops and their critics feel motivated by their faith and background. Like the Jewish leaders who feel a religious obligation to condemn the killing of young black men at the hands of the police, Jewish cops often feel in their work a sense of moral mission that is intertwined with their Judaism.

“As a Jew, I’m conscious of historical injustices through American history. I know what was fought for during the civil rights movement,” one Jewish police officer said, speaking anonymously because interviews with active-duty NYPD officers must be approved by their office of public information.

He called the deaths of Eric Garner and others “tragic,” but said that in his experience, racism was not prevalent in the police force and had nothing to do with the killings. He said that Jewish activists and other demonstrators are simplifying the issue: “It’s not black and white. As I’m struggling with someone during an arrest, I’m not thinking about what they look like.”

There are about 3,000 or so Jews in the NYPD, a small percentage of the 34,000-strong total police force in the city, said Rabbi Alvin Kass, chief chaplain of the NYPD. Still, Jews have a historic connection with policing in the Americas, dating back to the time when this city was called New Amsterdam and was a Dutch settlement, Kass said.

A Polish-born Jew named Asser Levy, who came to this continent in the 1600s, protested a prohibition that existed then against Jews serving in the colonial militia, Kass recounted. His demands were eventually met by the governor of the time, Peter Stuyvesant, and Levy was allowed to take up arms alongside other colonialists. More recently, a book by Virginia psychologist Jack Kitaeff, “Jews in Blue,” gives in-depth portraits of dozens of Jewish police officers through American history.

Jews serving in the force have had to combat general prejudice and stereotypes about typical “Jewish professions,” sometimes from within their own families. “The stereotype of Jews is that they’re doctors, lawyers or businessmen, or accountants,” Kass said.

But Jews may be well suited to the challenge of police work, Kass thinks, because Judaism provides a moral framework, a tool for navigating the streets of America, for dealing with what Kass called the “unsavory realities of the human existence.”

“According to the Talmud, humans have two inclinations: the good inclination and the bad inclination, positive and negative. They are always struggling with each other,” Kass reflected. “The whole system of mitzvot is meant to channel human behavior in positive ways, to ensure that the good inclination prevails over the bad. That’s the challenge of human life, that’s what Judaism is about.”

New York’s Shomrim Society is the oldest and largest fraternal organization for Jewish law enforcement in the country. It was founded in 1924 and has around 3,000 members, some of whom are retired police officers, said Kass, who is the group’s chaplain. There are other Shomrim Society chapters scattered across the country.

Like Kass and others, Moskowitz, who left the force years ago and now teaches self-defense, said that he was guided by Jewish spirituality during his years in law enforcement. “My Judaism is based on tikkun olam. Being a cop allows you to change people’s lives,” Moskowitz said.

But unlike other Jewish police interviewed, Moskowitz has many misgivings about police tactics. “They can’t tell the difference between a good black man and a bad black man,” Moskowitz said, referring to the NYPD and the death of Garner. “Surely there’s lot of crime, but the cops should be able to tell the good guys from the bad guys.”

Moskowitz distanced himself from the larger protest movement (“I’m not a bleeding-heart liberal,” he stressed), which he said misses the real problem. “This is not a black-and-white issue, this has to do with lack of training.”

Now 57, Moskowitz was deeply moved years ago by his relationship with the controversial founder of the Jewish Defense League, Rabbi Meir Kahane. Moskowitz attended a JDL training camp as a young man and was transformed. Bullied as a boy in the Bronx, Kahane’s message of Jewish self-defense was resonant.

“I used to be jumped by black and Hispanic kids in my neighborhood,” Moskowitz said. “After camp, I was in perfect shape. I was able to defend myself.”

Moskowitz later had an ideological falling-out with Kahane, but the JDL founder’s teachings helped Moskowitz imagine a new paradigm of Jewish manhood, one that carried over into his police work. Similarly, other Jewish police officers said that serving in law enforcement helped them break down common stereotypes about Jewish men being “intellectuals” and not “warriors,” one officer explained. 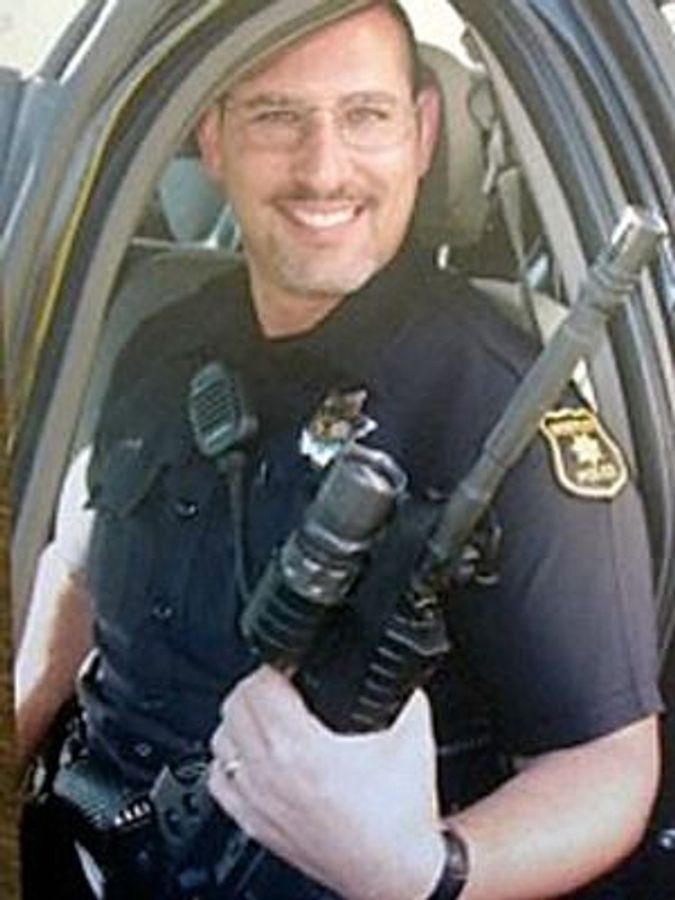 The family of 51-year-old Jerome Cobert, founding member and president of Northern California’s Shomrim Society chapter, was wary of his decision to go into policing.

“Coming from a Jewish background, there was some trepidation and suspicion about authority figures. We’re only a few generations out of the Holocaust,” said Cobert, who grew up in Los Angeles. And his mother was afraid that any profession involving a uniform was too “Nazi-like.” “If I’m going to maintain my relationship with family, I’m going to have to show them that I’m a cop, but I’m still Jerome,” he said.

On the streets of Berkeley, where Cobert first worked as an officer in 1995, he would run into activists, including Copwatch, a group that monitors police misconduct and brutality. When he did, he said, he tried to listen: “They’re pushing an agenda, anti-cop, anti-authority, but I found that people wanted to be heard. I realized we could solve some problems this way.”

In part, Cobert thinks his Jewish upbringing is what taught him to approach situations like this, looking for a multiplicity of viewpoints. “In Judaism, you’ve got five guys, seven opinions. I try to empathize, stop and listen to people, give people one more chance,” he said.

Steve Harris, a 54-year-old retired Bay Area police officer who is now an inspector for the district attorney’s office, recounts that his parents were also wary of his joining the police force — they would have preferred a legal career for him — but they eventually warmed to the idea. Like others, Harris says family stories passed down about Jewish persecution informed his sense of justice and morality.

Harris, who follows Lubavitch practice, was in New York in December to attend the funeral of Rafael Ramos. When Mayor Bill de Blasio began speaking, Harris was surprised to see hundreds of New York police officers turn their backs in protest. He didn’t know what was going on.

“It’s de Blasio, you turn your back,” he remembers someone telling him. “I turned around. I’m not happy with de Blasio,” Harris said, echoing the accusations that de Blasio has encouraged anti-police sentiment in New York. “For someone who’s never walked in our shoes to make statements that undermine the public trust, that’s the wrong thing. I am in solidarity with my brothers in blue, even though we worship differently. I would die for them in a heartbeat.”

Inside the Heads, Hearts and Yarmulkes of Jewish Cops