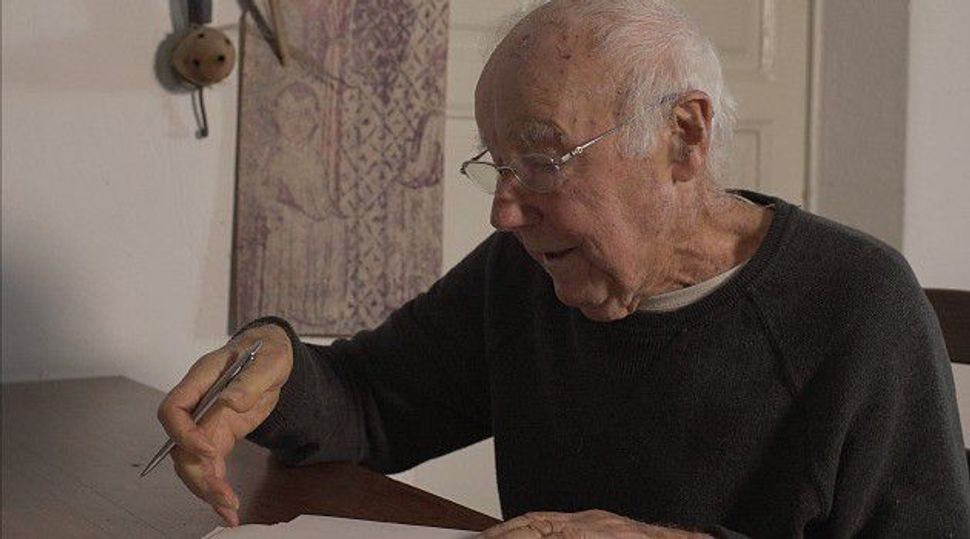 Simcha Rotem, who fought in the Warsaw Ghetto uprising, says he now backs a planned monument to non-Jews who rescued Jews in the ghetto square.

The controversy surrounding a monument to honor Poles who saved Jews during the Holocaust has taken yet another turn, as Simcha Rotem, a prominent survivor of the Warsaw Ghetto, has reconfirmed his support for the project, days after signing a letter protesting its location.

Rotem said that he supports locating the monument on the site of the Warsaw Ghetto memorial complex, near the newly opened Museum of the History of Polish Jews and the Monument to the Ghetto Fighters.

In a letter in Polish published online on February 3, Rotem said that he had been misled into signing a January 19 letter arguing that the monument should not be located within the boundaries of the Ghetto, where Jews staged what was the largest rebellion against the Nazis in 1943. Rotem, now 90, is one of the last survivors of the Ghetto uprising, and his opposition to the project was considered significant.

In his latest public statement, he said that he thought the earlier letter referred to a different proposed monument and was “shocked” to learn that he was perceived to be an opponent. Rotem could not be reached for comment.

Rotem’s turnabout comes after the growing attention of a Facebook page devoted to keeping the monument away from the Warsaw Ghetto Square to preserve it as a solely Jewish memorial space. “The square with its Ghetto Fighters Monument symbolizes the profound abandonment, complete isolation and cruel death of the Polish Jews imprisoned behind the Ghetto Walls. Adding another monument on this site, even for the heroic Righteous Poles, is inappropriate, insensitive, and overpoweringly changes the narrative and the perception of the fate of the Warsaw Ghetto,” writes Henry Lewkowicz, the Ottawa-based creator and administrator of the Facebook page.

There is a competing initiative, pushed by Catholic and conservative circles, to build a monument at Grzybowski Square, the heart of pre-war Jewish Warsaw, which would list 10,000 names of persons and institutions who supposedly rescued Jews during the Holocaust.

That number has not been verified by any credible historical source however. According to Yad Vashem, the Israeli Holocaust Museum, 6,454 Poles risked their lives saving Jews during the Nazi occupation.

One observer said that this conflict between the Jews in Poland was embarrassing, and noted that both sides are trying to take advantage of Simcha Rotem for their own gains.

“I have written before that this conflict around the Monument’s location is shamefully repulsive and hideously entangled in our local dirty politics and it will be something that we will have to be ashamed of,” wrote Pawel Jedrzejewski, a journalist of FZP — Polish Jewish Forum online magazine. “Currently, when looking at the way that Mr. Simcha Rotem is treated, I am sure that we have breached a certain line of decency. This disgrace is already inevitable.”