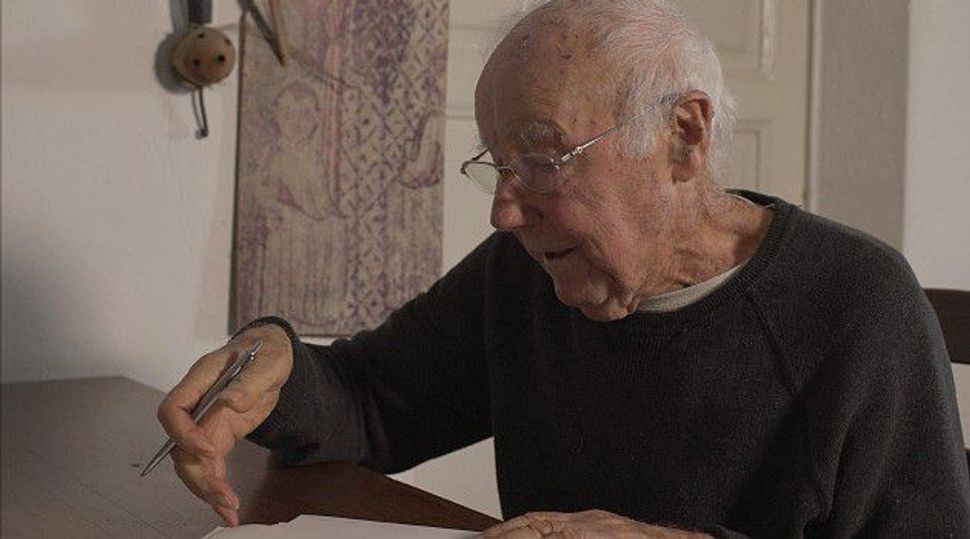 Simcha Rotem, who fought in the Warsaw Ghetto uprising, signs letter asking government to reconsider decision to put monument to non-Jews who rescued Jews in so-called ‘zone of memory.’

This article first appeared in the Yiddish Forverts

Plans to erect a monument to Righteous Gentiles next to the newly dedicated Polin Museum of the History of Polish Jews is evoking a growing anger in Poland and abroad.

The museum stands on the site of the former Warsaw Ghetto, the largest of all the Jewish ghettos in Nazi-occupied Europe during World War II. Over 400,000 Jews were ordered to live there, of whom at least 254,000 were sent to the Treblinka extermination camp over the course of two months in the summer of 1942.

A revolt against the Nazis in 1943, which became known as the Warsaw Ghetto Uprising, was the largest single rebellion by Jews during World War II, and has become the most widely recognized symbol of Jewish courage and heroism during the Nazi era.

A Facebook page in Polish devoted to garnering support for the preservation of the Warsaw Ghetto Square as a solely Jewish memorial space, states: “The square with its Ghetto Fighters Monument symbolizes the profound abandonment, complete isolation and cruel death of the Polish Jews imprisoned behind the Ghetto Walls.

Adding another monument on this site, even for the heroic Righteous Poles, is inappropriate, insensitive, and overpoweringly changes the narrative and the perception of the fate of the Warsaw Ghetto.”

According to Yad Vashem, the Israeli Holocaust Museum, 6,454 Poles risked their lives saving Jews during the Nazi occupation.

Henry Lewkowicz, the Ottawa-based creator and administrator of the Facebook page, told the Forverts that feedback has come in from over 1,000 people since its inception in June 2014, and overwhelmingly, they support choosing another location for the planned monument. Among its supporters are the Polish Center for Holocaust Research, the Jewish Historical Institute, as well as prominent writers, journalists, artists, historians, archivists and community activists.

Many of those who have “liked” the site are grown children of survivors who were born in Poland after the war, and spent their childhood there until Polish Communist leader Władysław Gomułka incited an anti-Semitic campaign in 1968, resulting in the expulsion of about 25,000 Jews between 1968 and 1970. Today, most of these “second generation” Jews live in cities throughout Europe, the United States and Israel, still speak Polish regularly and reconnect with other Polish Jews every couple of years at reunions in Israel and in their native cities and towns.

Last week, the Facebook page posted an open letter by two of the last surviving fighters of the Warsaw Ghetto Uprising, Simcha Rotem and Pnina Grynszpan Frymer, which was published on January 22, decrying the placing of the monument on the site of the former ghetto. The letter was also sent to Polish President Bronisław Komorowski and Warsaw mayor Hanna Gronkiewicz-Waltz.

Several of the strongest critics of the monument placement are not even Jewish. Barbara Engelking, Director of the Polish Center for Holocaust Research at the Polish Academy of Sciences, was one of the signatories of a previous open letter, penned by Academy scholars in April 2013, criticizing the monument’s proposed location.

“These few streets and squares are a one-of-a-kind zone of silence, where Jewish suffering, not Polish heroism, should be commemorated,” the letter said. Engelking also wrote a commentary in Poland’s largest newspaper, Gazeta Wyborcza, stating: “There should be a zone of silence around the museum dedicated to the Jews of the Warsaw Ghetto, where Jews loved, prayed and died in horrible ways.” Her phrase “zone of silence” has become a slogan for the critics of the monument’s placement.

“I have nothing against commemorating those who saved Jews, but everything was decided by the Polish president and mayor, without any consultation with the Jewish community,” said Jan Grabowsky, a professor of history at the University of Ottowa, Canada. “The problem is that this monument will be used as a shield to deflect from the history of anti-Semitism in Poland.”

In fact, there is a second monument planned to be built half a mile away, next to the All Saints Church, which openly aims to “clear Poland’s conscience” by inscribing the names of 10,000 Poles who allegedly saved Jews, a much higher number than the figure reached by Yad Vashem. The Polish president and Warsaw mayor have distanced themselves from that project, however, because its coordinator, Jan Zaryn, is an unabashed ultra-Nationalist who has continuously condemned Jan Gross, the Princeton University historian, for documenting the role Poles played as Nazi collaborators. Gross is, in fact, a strong critic of the plan to build the monument in the Warsaw Ghetto site.

Grabowski, who won the 2014 Yad Vashem International Book Prize for his book, “Hunt for the Jews: Betrayal and Murder in German-Occupied Poland”, says the Warsaw Ghetto Square should be “a sacred place of Jewish memory, not a way of selling Poland abroad. By building this monument, it’s creating a kind of sanitary cordon of Polish memory on the territory of the Polin Museum, as if to ‘protect’ the public from whatever ‘offensive’ meanings they might find inside the museum.”

In fact, the decision to place the monument for the Righteous Poles, which Grabowsky ironically dubs the “Monument of Grateful Jews”, next to the Jewish museum, is “the only platform today that unites the Right and the Left in Poland. The Polish nation can now look at its past with pride and joy,” he remarked.

Interestingly, the one leading the project to build the monument next to the Polin Museum is Jewish himself: New York-based philanthropist and Holocaust survivor Sigmund Rolat. In an article in Forbes Magazine last November, Rolat explained that the monument, if it was erected somewhere else, “would be visited only by a small group of museum visitors, maybe by every twentieth visitor, who would take the trouble to see it and learn about the righteous.”

Michael Szporer, a communications professor at the University of Maryland University College and the child of a survivor, suggests a possible solution to this dilemma. “Instead of placing the monument next to the museum, a more appropriate place could be the site where the house, 6 Muronova Street, once stood,” he said. It was through the cellar of this house, on the Aryan side of the ghetto wall, that Polish resistance fighter Jan Karski had smuggled his way into the Warsaw Ghetto, into order to see for himself if the horrors he had heard about the treatment of Polish Jews was true. By choosing a site on the border of the ghetto, rather than inside it, Szporer said, the government could avoid the controversy altogether, yet at the same time commemorate a spot that has “significance and historical value” all its own.

“You can mount a rational argument that the monument should be associated with the museum, but given the emotional context, it’s better not to do it,” John Pawlikowski, a priest and professor of social ethics at the Catholic Theological Union in Chicago, told the Forverts. He pointed out that there’s been a monument in the Warsaw Ghetto square that honors Righteous Poles since 1995: the Zegota Memorial, which commemorates the activities of the Zegota Committee – an amalgam of Christians, Jews and socialists who rescued Jews, particularly children, from the Nazis, by finding them safe houses on the Aryan side. Yet, this monument has never garnered any controversy, probably because it is small and easily missed. “It was basically ignored for many years because the Zegota Committee supported the Communist government after the war,” he said.

Pawlikowski, a former co-chair of the now-defunct National Polish-American Jewish-American Council, doesn’t think that the Polish government is trying to neutralize the Jewish dimension of the Holocaust, but understands why the Jewish community fears this. In 2006, he attended a speech given by Pope Benedict at Auschwitz-Birkenau, where almost all attending survivors were Poles. Apparently, the organizers had neglected to invite Jewish survivors until the last minute and even then, expected them to pay their own way, even though they were elderly and living abroad. “Suddenly there was a frantic call among the organizers: ‘Quick, we need to invite some Jewish survivors!’ It gave the impression that there was no whole-hearted wish for them to come,” Pawlikowski said.

Lilka Elbaum, a Jewish child of survivors who was raised in Lodz, Poland, and now lives in Boston, told the Forverts, that she is determined to do everything she can to find righteous Poles and give them the honor they deserve. “I’m in awe and incredibly indebted to them,” she said. A Polish family had hidden her mother in their barn in the town of Biala Rawska. After the war her parents kept in touch with their rescuers, and now that the Jewish and Polish survivors have passed away, their children and grandchildren have maintained the bond. Just last June, Elbaum attended a ceremony in Warsaw honoring another Polish family that rescued Jews.

“Unfortunately, many righteous Poles were never discovered because even their witnesses have died,” she said ruefully. Her search for rescuers has also been hampered by a lesser-known fact: many of the rescuers were not especially proud of what they did. Even her mother’s rescuers never mentioned it to their neighbors.

“Everyday Poles who saved Jews felt terrorized by their own neighbors and by the Polish underground, who often considered hiding and helping Jews an unpatriotic act,” Grabowski explained. Their fear of what their fellow Poles would think, or do to them, forced many of them to keep their secret even after the war.

Yet, even Elbaum believes that the monument of Righteous Poles needs to be built elsewhere. “Introducing a counter-narrative in this area is the beginning of revisionist history,” Elbaum said.

Polak writes that he occasionally hears the argument that Yad Vashem already has a monument for the Warsaw ghetto victims on the same site as one for righteous Gentiles, and no one complains about that. “This is true,” he tells them. “But Yad Vashem is a documentation center, not an extermination site.”