Secrets of the Land of Esther 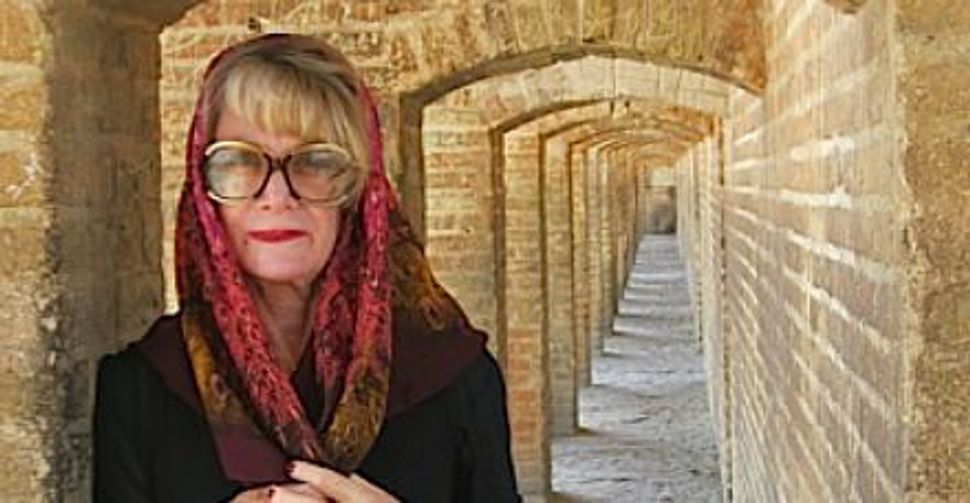 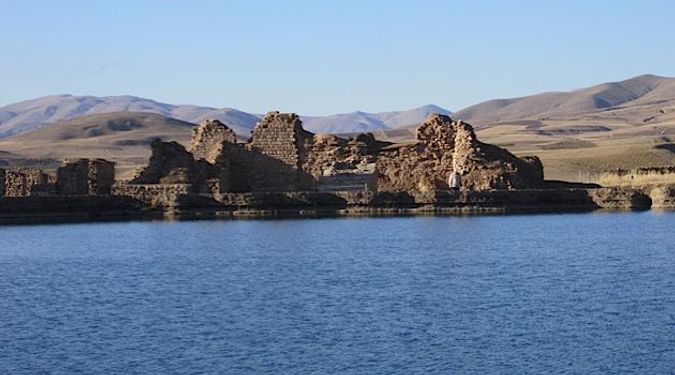 Arriving at the airport in Tabriz, Iran at 2:30 a.m., I covered my head as the travel agency had instructed. I had come as a tourist, planning to travel the country for three weeks. At immigration, my passport and visa were confiscated because I am American. Segregated from other arriving passengers, in the middle of the night, I had Kafkaesque visions of disappearing forever. Three hours later I was summoned to a small room where four 30-something men fingerprinted me on a machine older than Methuselah and then cheerily sent me on my way.

Tabriz is a city dating to antiquity in a mountainous region on the border of Iraq and Turkey. Snow covered the ground later that morning as I ventured into the collision course that is Iranian traffic. At the Tabriz Historic Bazaar, the largest covered bazaar in the world and a World Heritage site, enthusiastic locals instantly recognized me as a tourist. They wanted to take pictures and practice their English. “Forget about the government,” they told me. “The people have to talk to each other. We can make peace.”

There is a huge gap between the rigid image cultivated by the regime and the reality of the society, where Hollywood movies and television shows like “Game of Thrones” are readily available for downloading. At the newspaper stands, George Clooney seems to be on the cover of every other agazine. From placemats to socks to the umbrella I bought at the bazaar, Disney is ubiquitous. At the same time, I was aware that the regime executed a teenage boy in the Tabriz prison the day before I arrived. He was 18 and had allegedly murdered another boy when he was 14.

When I came to Tehran, a city of 16 million a few days later, the heavy scent of diesel, mixed with eucalyptus engulfed me, as did the chaotic web of wires and cables, broken concrete sidewalks and banks in every nook and cranny. For two days I dodged urgent, reckless and terrifying traffic to visit bazaars, museums, the treasury, the Qajar dynasty’s Golestan Palace, and the Darband Mountains. I wanted to go to yoga class but was told that “yoga is banned right now.” The women on the buses and bazaars were self-confident, chatty and quick to express love for Americans. Iranians know the difference between Jews and Zionists, they said, and spoke disparagingly about their own government out loud. 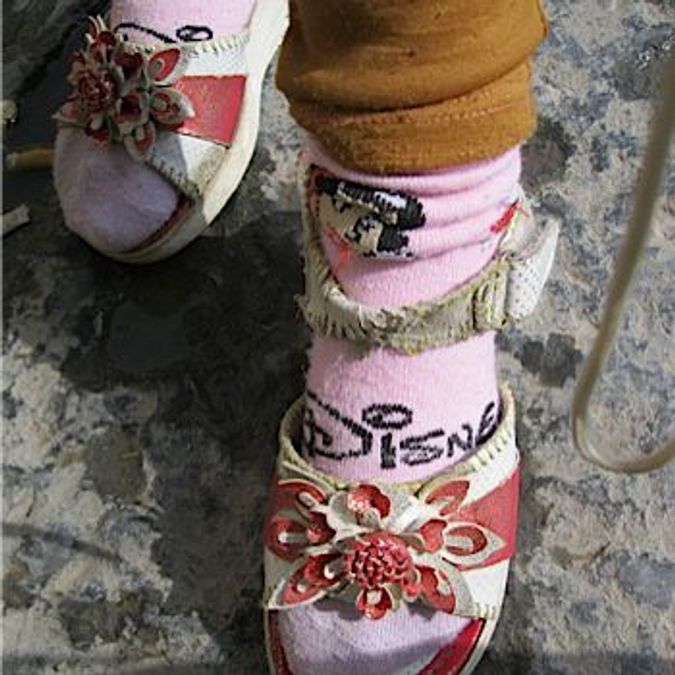 Sinful Socks? There seems to be a gap between the rigid image cultivated by the regime and the reality of society, where Hollywood, Disney and social media are ubiquitous. Image by Laura Shapiro Kramer

The laws that pertain to women’s rights seem to have no relevance to the lives of Iranian women. Sixty percent of university students are women. Iranian women occupy public spaces; they work, drive and shop. But two days before I arrived in Tehran, a woman was executed for murdering her alleged rapist. No one spoke of it. One woman told me, “The ‘trouble’ with Iran is if you need permission for something, there are at least 50 people to see. If you want to complain about something, there is no one responsible.”

The young are disillusioned, constantly referring to “living under the sanctions” and their desire to shop on Amazon, which they cannot do. “We have nothing to spend our money on,” one woman told me. This money — featuring Ayatollah Khomeini’s picture — is old and torn, and it is almost impossible to find new bills. Surrounded by Western consumer goods and beauty ideals, Instagram, Twitter and virtual networks, private lives are full of what the regime would consider “vice.” I went to beauty salons in Tehran and in Shiraz, and saw walls emblazoned with posters of bleached blonds in strapless gowns revealing ample décolletage while women painted their nails in lurid colors.

My next stop was Isfahan, the 16th-century Persian capital under Shah Abbas, which is crammed with architectural splendors. In the courtyard behind the Masjed-e Shah Mosque I encountered two clerics. They were 30-something, spoke fluent English, and sat in the cloister on the maidan, the central square, for the purpose of engaging with tourists. I told them I was a Jewish American. They began challenging me about the “Zionist media,” my “proof” of the prophets Moses and Daniel, and the Holocaust. I pushed back. My Muslim guide, Malileh, a 37-year-old woman from Shiraz who had joined me in Isfahan, remained quiet but squirmed when they said that women in Iran were free to choose whether they wanted to wear the veil. As I was about to leave, one cleric asked me if I knew anyone who could help with visas. They had been on a wait list for four years to come to study at Fordham University in the Bronx.

I went to visit an ancient cemetery called Serah bat Asher, located in a valley sheltered by gaunt mountains 18 miles southwest of Isfahan. It is one of the most important Jewish pilgrimage sites in Iran and has thousands of carved tombs, some dating back several millennia. Legend has it that Serah was the first Jew to set foot in Persia after the Babylonian exile, more than 2,700 years ago, and that her tomb is in the cemetery.

For 20 minutes Malileh and I pounded on two green painted metal gates, each decorated by a Magen David. Finally, Jacob, the sleepy-eyed caretaker, swung one gate open part way. He led us inside past two derelict buildings to a sanctuary with a stone door covered in Hebrew writing. Inside, in the anteroom, I crouched down to crawl through a tunnel to “Jacob’s pillow” of legend, a large stone barrel that was covered with kabalistic carvings and candles, which was said to have once perpetually circled around on the ground. Jacob keeps the candles constantly lit. The power of the legendary site drove tears into my eyes. 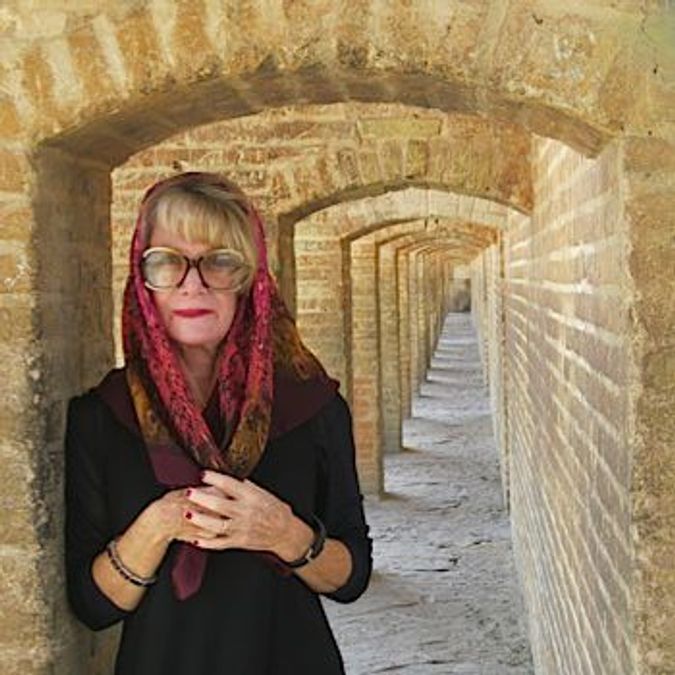 Jacob seemed like a holy man, living in a small cave at the front of the complex and sleeping on the floor on a mattress covered with a Persian carpet. He proudly showed us his frayed tallit and his well thumbed prayer book, and worked hard to maintain the cemetery and the buildings while welcoming thousands of pilgrims every year.

The next day, Malileh and I spent a car ride discussing Torah stories and comparing sounds of Hebrew and Persian words.

“Our government blames the Israelis for everything, but I actually think Jews and Iranis are very alike,” she said. “Plus we have the same mother and father: Adam and Eve.” She asked me what America had against the Iranian people. I mentioned that Americans get Iran mixed up with the Arabs.

Malileh wasn’t surprised. “We are Persians, descendents of the great Persian Empire. In fact, we have no good feelings about the Arabs. They burned our schools and our libraries.” This was 1,300 years ago during the Arab conquest of Iran and the end of the Sasanian Empire, but I guess scars run deep.

In Pasargadae, in the desert between Yazd and Shiraz, stands the mausoleum of Cyrus I of Anshan. When he became ruler of Babylon, he sent a group of Jews to Jerusalem to rebuild the Holy Temple. At the site’s entrance, I found a billboard written in English riddled with mistakes: “Imam Khomeini: The world knows that all Iran and Muslims problems are due to the politics of aliens. Of the USA Muslims generally hate Alies and specially hate the USA.”

Surrounded by visitors who wanted their picture taken with me, a young man with a sophisticated video camera asked me to say what I thought of Iran. It was for the cultural minister of the province, he told me.

I looked into the camera and expressed my admiration for the hospitable Iranian people; my respect for the monuments of the Persian Empire; and how much I savored the pistachios, melons and dates I had eaten.

“What is your message to the country?” he persisted.

“I am a Jewish American,” I began. “I am pleased to meet fellow Jews in Yazd and Isfahan, to visit the sites of my ancestors like Esther and Daniel and Serah bat Asher. I am looking forward to praying with my brothers and sisters in Shiraz. I see Americans and Iranians need to build bridges for a peaceful world.”

I made the peace sign and worried that secret police might follow me. Many adults and children had congregated and began applauding, understanding my meaning if not my words.

I had thought that if there had been Jews in Iran, they would be gone just like the Persian Empire was gone. However, the chosen nation is inextinguishable. Nothing proved this more than the Sabbath service that I rushed to in Shiraz on that Friday night. Well over 200 people were praying in the synagogue, called Kinisa-ye Rabbizadeh.

The congregants mobbed me after Kiddush, bursting with questions, mostly about Jews in America. Were they religious? Did the “reformed” compromise the other Jews? There were multiple invitations for dinner. 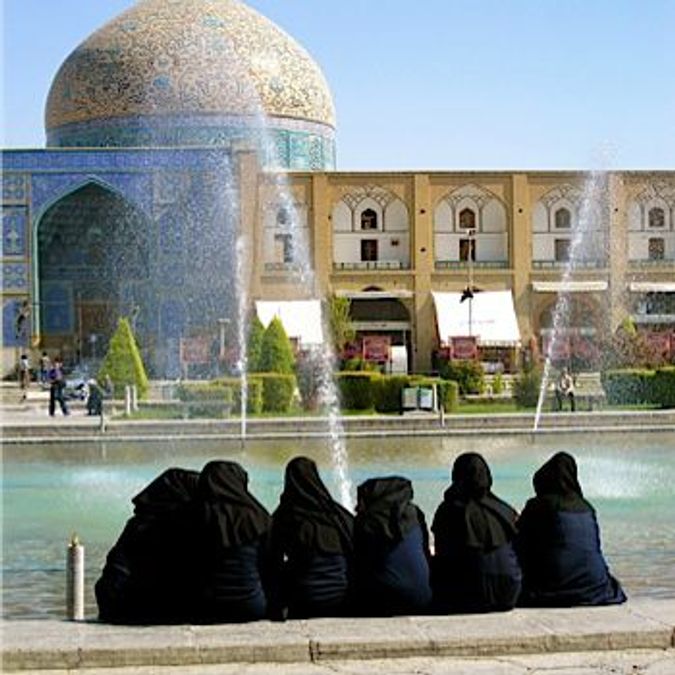 My last 10 days in Iran coincided with Ashura, the 10-day celebration of the funeral of the third Imam, Hossein. Rituals include preparing food to serve to the needy, get-togethers of families and neighbors, as well as big parades. Malileh invited me to her home, where I met her parents and her brother, Abbas. Aged 23, he had recently qualified as a pilot, depleting his own and his parents’ savings to take the necessary courses. Now he had a license but no job.

“The only way to get ahead is to know someone,” he said. “I feel like a drowning person.” He is trying to get a visa to live and work in Canada.

“Don’t leave your world,” I wanted to say. “The legacy of the Persian Empire is so immense.” Instead, I asked Malileh how she felt about staying in Iran.

“I cannot leave my country. If I leave, who will be left to take care of it? Who will guide you to Persepolis? I can’t do political things. I can’t protest against the government, but I can stay to protect what I have,” she said. She wanted her brother to go, she added, because he had a desire to know more about the world, “a world that Persia helped shape for centuries.”

Malileh will remain in the land of her ancestors, a land where leaders are divided between the medieval and modern; where banking and oil are king; a land of nightingales, poetry, rose gardens and cypress trees.

Laura Shapiro Kramer is a writer. Visit www.laurashapirokramer.com to read the full account of her travels to Iran, from which this piece is excerpted.

Secrets of the Land of Esther