What’s Behind the Mass Layoffs at the Philadelphia Jewish Exponent? 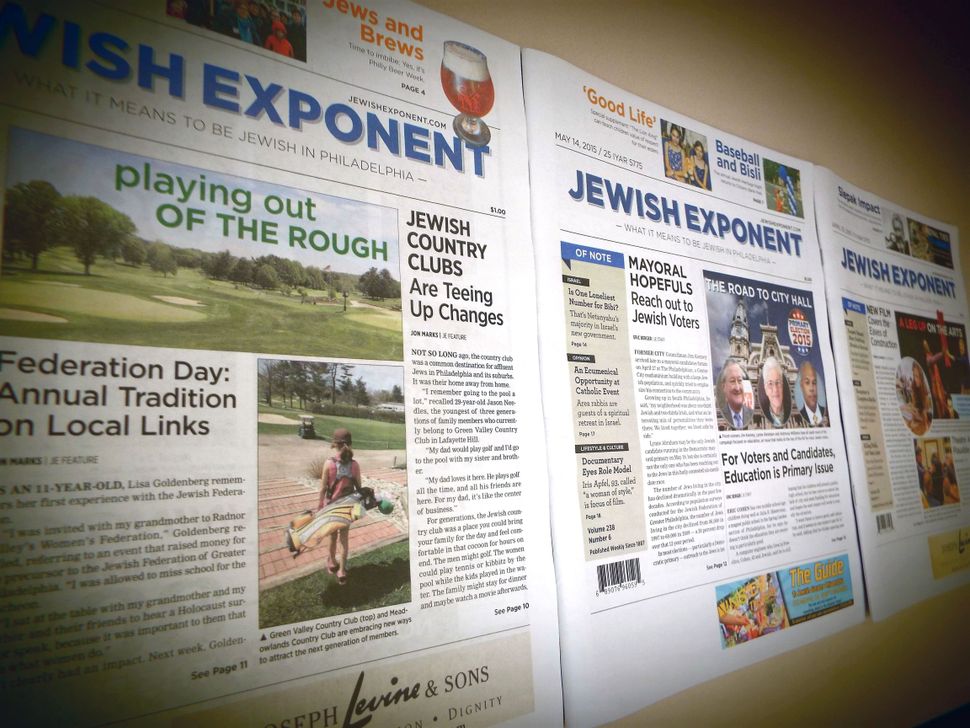 'What it means to be Jewish in Philadelphia' is now decided in Baltimore. Image by Jewish Exponent

The abrupt layoff of all editorial staffers at Philadelphia’s Jewish Exponent, the second-oldest Jewish newspaper in America, has highlighted the dire situation of local Jewish publications struggling to stay afloat.

Fifteen journalists and production staffers were laid off on June 3 as part of a new experiment in the world of Jewish media: outsourcing editorial content to a larger supplier in order to cut costs and potentially save the publication. The Exponent, a paper owned by the local Jewish federation, has published continuously since 1887 but lately has been losing about $300,000 a year.

For Philadelphia’s Jewish community, this new approach entails both hope for securing the local paper’s future and fear that an outsourced newsroom will fail to convey any sense of the community’s spirit.

For the Jewish community nationally, meanwhile, the experience of the Exponent, which has won many journalism awards, raises questions about how local federations will address the issue of critically informing their communities in an era of shrinking budgets.

“I think it’s a big mistake,” said former Philadelphia communal leader Burt Siegel of the federation’s approach. Siegel, who served as executive director of Philadelphia’s Jewish Community Relations Committee, said, “This is a decision that really doesn’t understand the community.”

But Steve Rosenberg, the federation’s marketing director who also serves as publisher of the Exponent, promised that in its new form, the paper will have “more writers in Philadelphia, more attention to local stories and more local news.” The drastic cut was necessary, he said, because “the federation is not set up to save a newspaper.”

The Exponent’s overhaul is being watched closely by many in the world of Jewish media who are seeking new models to sustain communal papers. Several local newspapers have folded in recent years. But others are trying new ideas, from soliciting donations to collaborating with other publications and giving up print for an online-only presence. All are seeking to gather and publish Jewish news while cutting their expenses as much as possible.

“The new normal is making bricks without straw,” said Marshall Weiss, editor and publisher of the Dayton Jewish Observer. Weiss is also president of the American Jewish Press Association.

The dramatic changes at the Exponent took staff members by surprise. With no prior warning or discussion, editor Lisa Hostein, all the paper’s writers and editors, and all those in charge of production were informed personally that their positions had been eliminated.

Instead, the federation contracted with Mid-Atlantic Media, a Baltimore-based publisher, to provide all editorial content and produce the paper. The Exponent’s marketing and advertising teams were kept on board.

The Exponent has served Philadelphia’s Jewish community for almost 138 years. Though its reporting won praise and awards, subscriptions to the Exponent, as is the case with most other print publications, have seen a steady decline and now stand, according to the publisher, at 24,000 copies a week.

This decline, alongside a drop in advertising revenue, has put the paper in the red. Rosenberg told the Forward that the paper also failed to “embrace technology properly,” leading to a further loss of potential online ad sales. “This is not 1978 anymore, and advertisers look at things differently,” said Rosenberg, who was hired earlier this year for a dual position of overseeing the federation’s marketing efforts and running the Exponent.

The idea behind outsourcing the paper’s content to Mid-Atlantic Media was to take advantage of the lower costs offered by a company that already publishes several other Jewish papers.

The federation chose this option, which includes mass layoffs, over other, more conventional approaches, such as holding special fundraising campaigns to save the paper or adjusting the federation’s allocations structure.

Mid-Atlantic Media was founded by a group of Washington-area Jewish businessmen, including past presidents of the Jewish Federation of Greater Washington. Initially, their goal was to purchase Washington Jewish Week, which had been experiencing a troubled relationship with the federation. The group bought the paper in 2010 and within several months dismissed its editor, Debra Rubin, reportedly in an attempt to improve relations with the federation. It later took over the Baltimore Jewish Times and began producing Pittsburgh’s Jewish Chronicle.

Now, the main challenge of the group is to convince Philadelphians that the Exponent will remain local despite the move of its editorial production center to a Baltimore-based enterprise.

The businessmen of Mid-Atlantic Media announced that Philadelphia native Joshua Runyan, their editorial director, will serve as the Exponent’s chief editor from the firm’s Baltimore offices. This, Siegel said, is exactly the reason that members of the Jewish community in Philadelphia are concerned. “His tukhis [rear end] will be in Baltimore,” Siegel said. He stressed that for involved readers like himself, there is nothing like a locally based editorial staff that understands the community and its nuances. “Every community has its own culture, its own sense of connection,” Siegel said.

Mid-Atlantic Media’s CEO, Craig Burke, sought to quell these concerns. “Give us some time to build the staff, and in a very short time we will publish a paper that is very local, with better stories and a higher level of journalism,” he said.

In struggling to fund Jewish local press, federations have been the most reliable source of backing. Seeing a shared goal of strengthening the local community, federations across the country have taken on the area papers, providing them with the financial resources needed to make up the difference between operational costs and the limited revenue from ads and circulation.

But in many cases this relationship came at a cost. In Philadelphia, the federation has held a position of a “publisher’s representative” who oversaw the paper’s editorial content. Articles that were critical of the federation or of major donors were at times removed, modified or corrected. Similar arrangements exist in most other federation-owned publications.

Journalists and community members in Philadelphia agreed that despite this, the Exponent enjoyed relative independence under Hostein’s leadership. Friction with the federation was hardly noticed.

But sustaining a healthy relationship with federations, which are both the owner and an object of coverage, is growing increasingly difficult.

“There’s no doubt that in recent years, federations are under pressure to increase their income, and one of the temptations is to use the newspaper primarily as a newsletter,” said Weiss, who as head of AJPA represents dozens of local Jewish publications from across the country.

This pressure is playing out in different ways. In Philadelphia the squeeze on federation resources has now led to outsourcing content. Seattle’s federation has downsized its newspaper significantly. A similar scenario played out in Rockland County, in upstate New York.

Other publications, either federation owned or private, have been exploring creative ways of making ends meet. Some, such as j, the Jewish news weekly of Northern California, have begun to actively solicit donations from the community; others, including New York’s Jewish Week and Cleveland Jewish News, have found that hosting events and custom publishing can provide extra revenue; others have partnered with larger publications to share content and lower costs, as is the case with the collaboration between the Jewish Journal, in Massachusetts, and the Forward, or the recently announced partnership between the Jewish Standard and the Times of Israel.

Within this mix, the idea of outsourcing content now being tested in Philadelphia is viewed as potentially promising, despite the questions it raises about the future of local reporting. “I’m sad about these good journalists losing their jobs,” said Steve Rabinowitz, a Jewish public relations professional in Washington who has been watching the world of Jewish media for decades. “But if this is what it takes to save Jewish journalism, this may be a needed step.”

What’s Behind the Mass Layoffs at the Philadelphia Jewish Exponent?