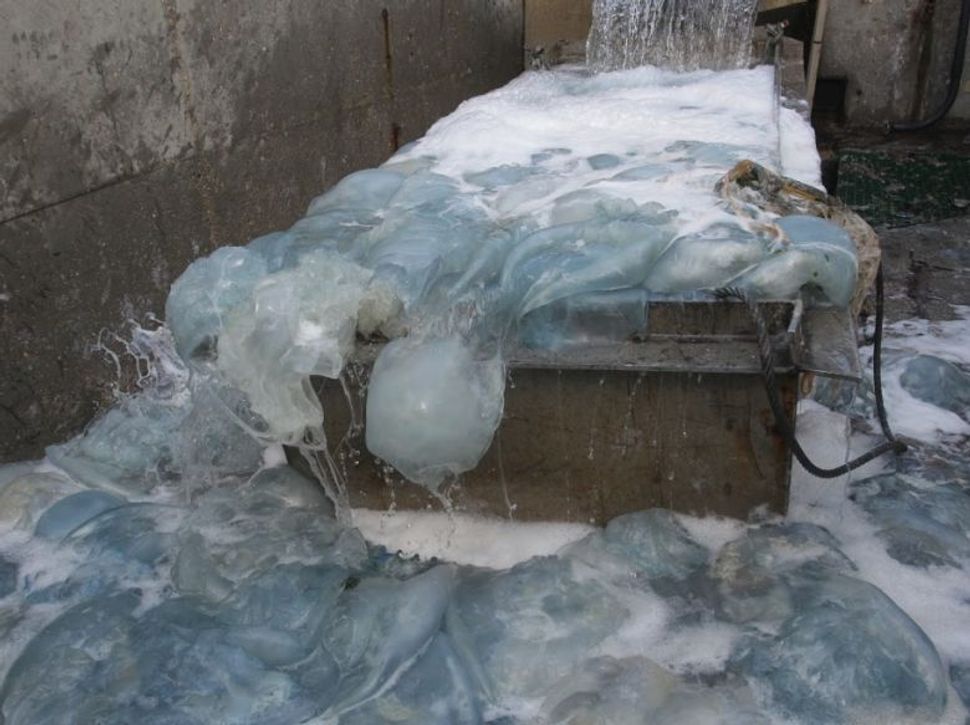 “Our coal-fired power stations are located by the sea because it takes a lot of water to cool them down,” Israel Electric Corp spokeswoman Iris Ben-Shahal told Haaretz. “At that entry point of the water into the cooling systems, we have filters to keep foreign bodies out. The jellyfish, and other things like sea plants, stick to the filters and clog them.”

In previous years, jellyfish cleared from the filters were returned to the sea, or were buried in coordination with the Environment Ministry, she says. “They arrived yesterday but we’re always prepared,” she added.

Jellyfish are a real and possibly growing problem for power stations, notably nuclear ones that need vast amounts of water for cooling, and are therefore also conveniently built by the sea. Unfortunately, that leaves them vulnerable to sea-related problems, from jellyfish swarms, which are all but impossible to predict, to tsunamis.

So power stations do get knocked out by jellyfish, and that goes for the most sophisticated of the lot as well. In 2013, for instance, a vast cluster of the things forced Sweden’s giant nuclear plant Oskarshamn to shut down as tons entered and clogged the cooling pipelines. It took some time to clear the system. The year before a California plant in Diablo Canyon had to shut down for the same reason.

The arrival of the giant jellyfish swarms on Israel’s coasts sadly is in time for the school summer break. At least the jellyfish plaguing the local shores aren’t deadly or even particularly dangerous.

Last year the jellyfish plaguing Rutenberg were ctenophora, or comb jellies, Ben-Shahal says. The jellyfish that graced the Ashkelon power plant Wednesday were, according to the pictures, Rhopilema nomadic, which is indigenous to tropical warm waters of Indian and Pacific Oceans and is considered an invasive species in the Mediterranean Sea that became firmly established by the 1980s and has been stinging seagoing Israelis ever since. It largely displaced the incumbents, rhizostoma puimo, better known as frilly-mouthed or dustbin-lid jellyfish.

According to University of Haifa jellyfish expert Tamar Lotan, who previously spoke with Haaretz about the beautiful but unappreciated animals, their movements cannot be predicted – but at least the Israel Electric Corp apparently was prepared nonetheless, and Israelis were spared brown-outs that would have been caused by jellyfish, yet again, knocking out a power plant.

By the way, if you go to the beach in Israel and get stung by a jellyfish, do note that pouring vinegar on the welts will achieve precisely nothing. Nor is the rumor that urine alleviates jellyfish stings true.