Reconstructionists Open Door to Rabbis With Non-Jewish Partners — But at What Cost? 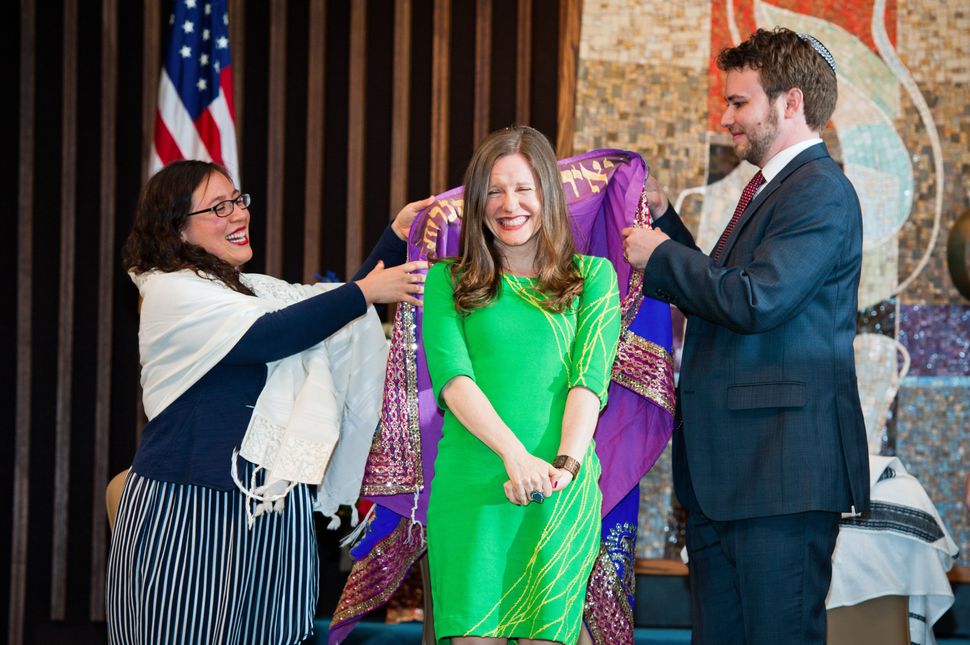 Image by Courtesy of RCC

Reconstructionist congregations say they’re ready for their movement’s seminary to become the first rabbinical school to accept students with non-Jewish partners, yet the fallout from the expected change could still fracture the troubled denomination.

The new policy, which will face a final vote among members of the Reconstructionist Rabbinical College’s faculty at the end of the summer, would mark a radical departure for a mainstream seminary. None, including those connected to the Reform and Conservative movements and the nondenominational Hebrew College, currently allows rabbinical students to enroll if they are in committed relationships with non-Jewish partners who have no intention of converting.

Yet roadblocks remain. Some congregations have threatened to leave the movement over the change, and others said that they would not hire a rabbi with a non-Jewish partner. Even those that support the change worry that congregations that chose not to hire intermarried rabbis would face boycott from other rabbinical students.

“I don’t want to leave the Reconstructionist movement,” said Rabbi Lester Bronstein, spiritual leader of Bet Am Shalom, a Reconstructionist congregation in White Plains, New York, and a prominent opponent of the proposed policy shift. “I want us to stay, and I hope like all get-out that the RRC finds a way to make a decision that [gives] people like me… a way to stay in.”

The proposed policy change comes at a moment of turmoil for the Reconstructionist movement. Enrollment at the RRC is down: The school ordained just six students in 2014, its smallest class in at least a decade. Meanwhile, the movement has merged its rabbinical school and congregational arm into a single organization; that joint organization is projected to run a half-million dollar deficit in the 2015 fiscal year. Rabbi Dan Ehrenkrantz, who led the merger, left in 2013 in a move that surprised some.

The current policy on rabbinical students’ partners dates to 1983, and explicitly bans prospective students from enrolling at RRC if they are “married to or in a committed relationship with a non-Jewish partner.” RRC’s faculty has already voted in favor of lifting the ban; a second vote, expected to be held late this summer, will be binding. A poll of current RRC rabbinical students found that 77% supported the change.

The RRC has insisted that its faculty alone has the right to make changes to its admissions criteria. That insistence caused tension with some movement leaders who opposed the policy, and the RRC has slowed the process of changing the rules and sought further input from Reconstructionist rabbis and congregations.

In a document prepared for Reconstructionist leaders in advance of a November meeting, the RRC laid out arguments in support of changing the policy. “Many younger progressive Jews, including many rabbis and rabbinical students, now perceive restrictions placed on those who are intermarried as reinforcing a tribalism that feels personally alienating and morally troubling in the 21st century,” the document read.

The document also argued that rabbis with non-Jewish partners could “serve as positive role models.”

“If we are on the record as a movement that supports full equality of interfaith families in our congregation, why should we stand on ceremony when it comes to rabbis?” said Reconstructionist rabbi Brant Rosen, who supports the change.

Yet the opposition from rabbis who oppose the shift has been forceful. Bronstein caused a stir in the movement with a widely circulated letter arguing against the change, first reported by the Jewish Telegraphic Agency in April, warning that his congregation could leave the Reconstructionist movement over the shift.

Bronstein told the Forward that, initially, it felt as though the RRC was dictating major policy changes to the congregations through the congregational umbrella arm. “You don’t make changes in personal-status decisions without discussing it with the whole community,” Bronstein said. “I think the RRC has been very responsive to that complaint.”

Bronstein said that he hoped for a compromise, by which the RRC would maintain its old policy of banning students in committed relationships to non-Jews, but allowing for flexibility to make exceptions.

“I’m hopelessly from the 20th century in this regard,” Bronstein said.

The report summarizing feedback from Reconstructionist congregations, based on input from roughly a third of the congregations in the Reconstructionist movement, offered new ideas for compromises. “Many” of the respondents, according to the document, asked for language in the policy by which rabbis commit to raising Jewish children and maintaining Jewish homes, even if their partner is not Jewish. Others proposed a compromise like Bronstein’s, reinterpreting the current policy to allow wiggle room for the school to admit some students with non-Jewish partners.

Those proposals will be considered by the faculty amid further deliberations, according to the document.

“The RRC faculty respects the autonomy of each congregation in determining its own boundaries about rabbinic spouses’ religious identity,” the document reads. “We will strongly advise interpartnered students to disclose their situation when applying for congregational jobs…. We have had no indications from students so far that they would ‘boycott’ congregations that would not consider interpartnered candidates.”

Reconstructionists Open Door to Rabbis With Non-Jewish Partners — But at What Cost?