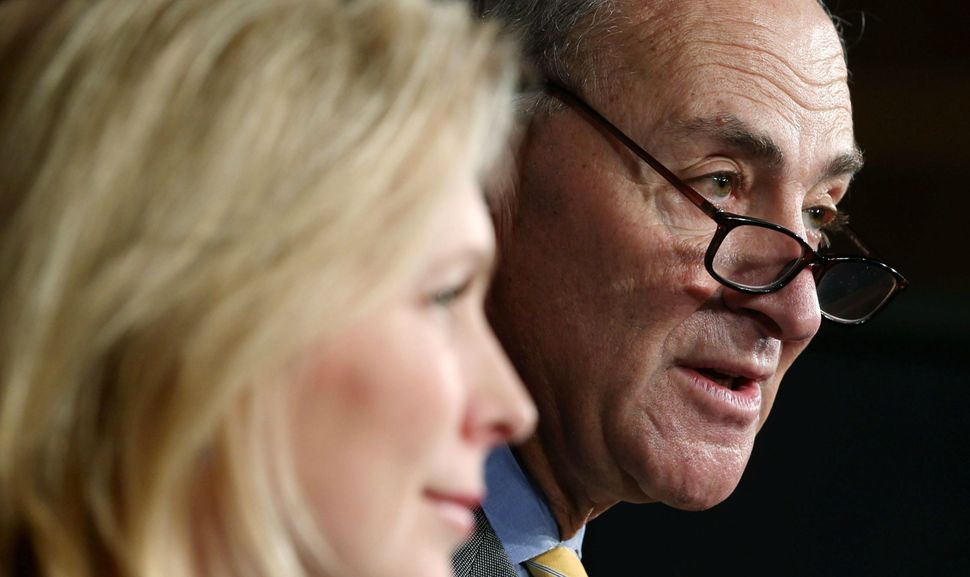 Within a few hours on August 6, New York’s two U.S. Democratic senators took sides on the heated debate over the nuclear deal with Iran. Kirsten Gillibrand, the junior senator, announced she’d vote for the controversial agreement. Chuck Schumer, the veteran who is slated to take over next year as Democratic leader of the Senate, declared that same evening that he would oppose the deal.

As the political battle over the deal rages, and President Obama seeks to ensure that Congress fails to block it, each has to face the political fallout from the decision.

Schumer, who is one of just two Democratic senators to announce opposition to the deal so far, has already come under fierce attack from progressive Democrats, who are threatening to cut donations and to challenge his march to Senate leadership. Gillibrand risks losing support from conservative Democrats and from Orthodox Jews, who oppose the Iran deal.

“It came down to where their political bases are,” a Democratic insider involved in New York politics said. “For Chuck, this is all about who sent him to the State Assembly and who sends him to the Senate every six years, and this means Orthodox black hats.” 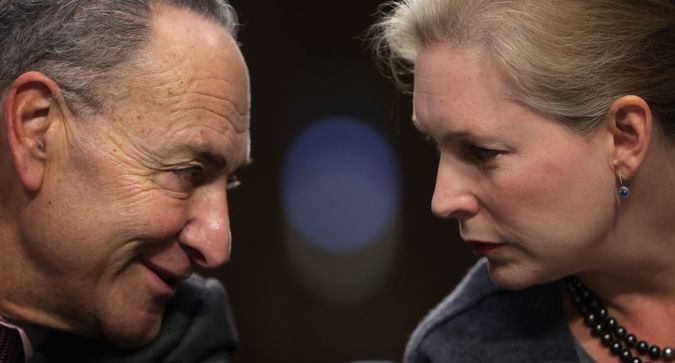 Gillibrand, on the other hand, relies on a coalition of upstate, suburban and union voters, the insider noted. She may be more focused on not alienating liberals who strongly support Obama.

The split between New York’s senators comes as a fierce national battle over the deal plays out, especially among Democrats. Opponents of the Iran deal need to amass a two-thirds majority of both houses to block the agreement, assuming Obama vetoes a measure disapproving it.

That means the president has to maintain strong support of only most of the liberal and centrist Democrats, like Gillibrand, to win a signature foreign policy achievement.

Neither senator has commented on the other’s Iran stance. Gillibrand has told reporters that Schumer did not try to sway her vote.

Schumer certainly is a bigger name and potentially has more to lose than Gillibrand. The senior senator needs his fellow Democrats’ support to take over the position of top Senate Democrat after Nevada’s Harry Reid retires next year; he is also a major fundraiser for other candidates. Any snag in Schumer’s popularity could affect struggling Democrats and could dampen his standing as party kingmaker.

Still, his base of donors, even those who strongly disagree with him, is unlikely to budge, even though grassroots progressives declared war against him.

“I’m a supporter of Senator Schumer, not withstanding my disappointment,” said Victor Kovner, a major New York Democratic donor who, as chair of J Street’s political action committee, has been lobbying forcefully for approval of the Iran deal. “We’re fortunate to have him as our senator even though he has reached a decision with which I deeply, deeply disagree.”

Kovner, who has a long-standing relationship with both New York senators, had set up a meeting with Gillibrand earlier in August to make the case for the deal, but he later learned there was no need for the extra push, as Gillibrand announced her support for the agreement before the meeting took place. Schumer’s opponents within the Democratic Party have viewed the case of another Jewish senator, Joe Lieberman, as a possible model for retribution.

Lieberman, a former senator from Connecticut, enraged progressive Democrats with his vocal support for the Iraq War and with his close partnership with Republican neoconservative hawks. A liberal opponent, Ned Lamont, defeated Lieberman in a Democratic primary in 2006, but the moral victory later proved hollow when Lieberman won re-election as an independent.

Several New York Democratic insiders said Schumer is unlikely to face a similar scenario when he runs for re-election in 2016, thanks to his strong base of support, his otherwise strong liberal credentials and his top position within the party.

Gillibrand, on the other hand, could face political flak over her vote on the Iran deal from Jewish organizations, pro-Israel groups and the Orthodox community, all of which have come out largely in opposition to the Iran deal.

A group that opposes the deal has already launched a social media campaign urging her to reconsider her decision.

“Will this vote put her on a collision course with parts of the electorate? Yes, it will,” said Hank Sheinkopf, a Democratic consultant aligned with the conservative wing of the party. “This is not something that people will forget.”

At the same time, Sheinkopf agreed with other experts that it is too early to know whether the vote will have any long-term impact on Gillibrand’s political career.

The political views of Gillibrand, who is up for re-election in 2018, have evolved as she moved, from a political base in far upstate New York, to the national stage.

While in the House of Representatives she was part of the Blue Dog Coalition of fiscal conservative Democrats, but her positions moved leftward toward the center of the Democratic spectrum after joining the Senate in 2008. Critics and supporters alike gree that she has shifted her political stance to adjust to her new constituency as leader of the entire state of New York, which is much more liberal.

Gillibrand’s planned vote in favor of the Iran deal, and the embrace she had received from J Street, is unlikely to reflect any shift in her broader backing of a pro-Israel agenda. On issues relating to the Palestinian conflict and to aid to Israel, the junior senator from New York is still in the column of the American Israel Public Affairs Committee. With some political analysts seeing a possible national race in Gillibrand’s future, close ties with all walks of the Jewish community remain a valuable asset.

By all accounts, the split on Iran is a rare disagreement between the two politicians who have mostly worked closely together during their six years sharing the Senate stage.

Despite their outward amity, according to a New York Democratic operative there is a “healthy rivalry” between the senior and junior senators, with Schumer playing a larger role in national politics and Gillibrand still focused more on the state level.

For Schumer, this is a return to the normal state of business after serving eight years next to Hillary Rodham Clinton, who despite being his junior, played an outsized national role thanks to her previous position as first lady and to the widespread backing she enjoyed in Democratic political circles.

The split also illustrates how two leaders with broadly similar views can come to different conclusions.

Both senators are foreign policy centrists with strong pro-Israel credentials.

But they apparently gave different weight to different political constituencies, especially within the Jewish communities.

Representing America’s largest Jewish population, and aware of the deep feelings American Jews have regarding the Iranian issue, both senators met with many Jewish activists before making their call. Despite the intense lobbying carried out by Jewish groups against the bill, Jewish voters are deeply split on the deal, with most polls showing at least as much support as opposition.

That split may have given Gillibrand the political cover necessary to back a popular Democratic president, while allowing Schumer to buck liberals and please his core supporters and donors.

“There’s a tendency of people not from New York to think constituents are homogenous,” New York Democratic strategist Evan Stavisky said. “But there’s a huge diversity, from ultra-Orthodox to the bacon-and-eggs Jews. This is a diverse community on all issues.”

Some say that diversity could allow Schumer and Gillibrand to continue on upward political trajectories despite intense opposition from the other side to their respective positions on the Iran deal.

“It’s very rare that one vote causes long-lasting political problems,” Stavisky said. “It’s unlikely either one is going to face any liability.”