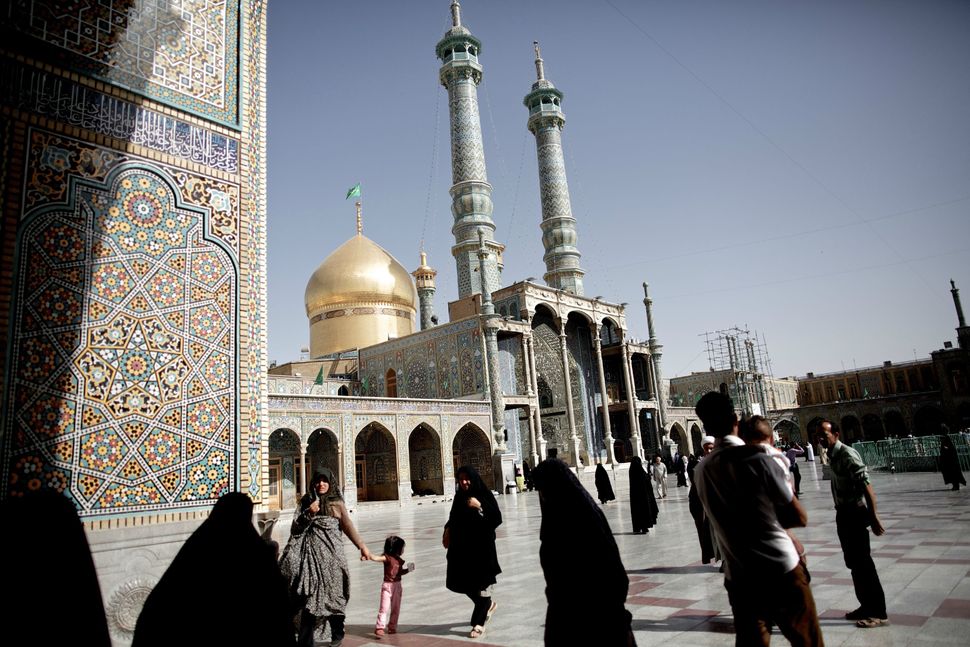 The Shia holy city of Qom teems with mosques, mullahs and madrassas. So, it was a little surprising to hear Qom religious scholar Hossein Soleimani’s response when I asked him to name his favorite writers.

“Adin Steinsaltz, for his translation of the Talmud,” he responded promptly. “And also Martin Buber.”

Soleimani was one of several senior faculty members from Qom’s University of Religions and Denominations whom I met during my recent visit to Iran. Soleimani’s field is comparative religions, and he is affiliated with the school’s center devoted entirely to Judaic studies.

Soleimani’s area of specialty is the study of sects in Jewish history — especially during the talmudic period, from about 70 B.C.E. to 500 C.E. Another area of interest, he said, is corporal punishment in the various religions.

“I’m a criminologist,” he said, “so I’m studying crime and punishment in Judaism. Right now, I’m translating a book on criminal justice in Judaism — ‘An Introduction to the History and Sources of Jewish Law.’” The book, with several authors and editors, is published by Boston University. 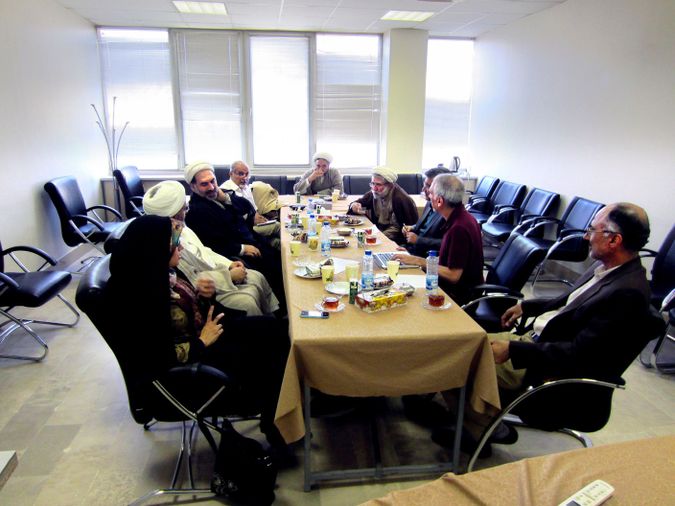 Hojatoleslam Abdul Rahim Soleimani, another scholar at the school — and Hossein Soleimani’s brother — told me he studies Judaism and Christianity “because I want to have a better understanding of the Quran.” His title, hojatoleslam, denotes his status as a cleric just below the level of ayatollah. But like his brother and other faculty members, he also has a doctorate. He noted that in the Muslim holy book, “Judaism is spoken about more than any other [religion]. The Holy Quran endorsed the fundamentals of Jewish teachings. But of course, there are parts where the Quran criticizes the behavior of the Jews.”

Mehrab Sadeghnia specializes in the study of Jewish mysticism — “especially the Zohar” — and in Midrash, the Talmud’s elaboration on many of the stories in the Torah. He noted that the Quran contains “a lot of the same teachings you find in the Gemara,” a major component of the Talmud, “so we are interested to see how scholars of Judaism approach these same teachings.”

Meanwhile, Ali Shabazi, another religious scholar, specializes in Jewish kalam, the philosophy developed by the Jewish medieval-era scholar of Baghdad, Saadia Gaon, and by others. Their system of thought, heavily influenced by the parallel philosophy of Islamic kalam, sought to integrate Jewish theology with aspects of Greek philosophy. Shabazi is a big fan of Harry Wolfson, the seminal Harvard University Jewish studies scholar of the mid-20th century who identified the many ways in which Muslim, Jewish and Christian philosophy influenced and interacted with each other in the Middle Ages.

Yet for all the scholarship of these Shia clerics, their work remains virtually unknown among Judaic studies scholars elsewhere.

“This is all new to me,” said Steven Zipperstein, the Daniel E. Koshland Professor in Jewish Culture and History at Stanford University, when asked about these scholars’ work. Zipperstein, a specialist in Russian and Eastern European Jewry who is a former vice president of the Association for Jewish Studies, added, “I’d be surprised if this were not also a surprise to colleagues closer to the area of research where this center is located.”

One such colleague, Mark R. Cohen, the Khedouri A. Zilkha Professor of Jewish Civilization in the Near East, Emeritus at Princeton University, was flummoxed to hear about the existence of Qom’s Judaic studies center.

“This is something I have no knowledge of whatsoever,” he said. “This is fascinating, and I’m very glad to hear about this.”

According to Fatima Tofighi, an assistant professor of women and religion at the school, URD has had some “dialogues” with other academic institutions, “but nothing serious.” She added, “We would be interested in doing this.”

She noted that the school publishes several scholarly journals, including the Farsi publication Haft Aseman, or Seven Skies, and the English-language journal Religious Inquiries. But as of yet, she said, “they are not online.”

To some extent, the intellectual and academic isolation of these Iranian scholars may be attributable to the overall isolation of their country, not to mention that they publish most of their work in Farsi. “It might be helpful to consider them alongside other rather isolated centers of Jewish learning,” said Zipperstein, who compared their situation to that of Jewish studies scholars in China before that country opened up to the West in the 1980s. To a certain extent, scholars of Judaism in Japan, “where language barriers create a lot of hurdles,” also are somewhat isolated, he noted.

But their isolation may owe something, too, to the thoroughgoing separation that the Iranian clerics make both politically and intellectually between their work and anything having to do with the State of Israel, an area of study they consider off-limits. In contrast, the broader field of Jewish studies often holds conferences in Israel and considers the interaction among Zionism, Judaism and Jewish history part and parcel of its research brief.

In Iran, Abdul Rahim Soleimani said, the absolute distinction between Judaism and Zionism that the government makes is mirrored in the school’s research.

“The State of Israel is considered [merely] a secular Zionist state,” he said. He views it as unrelated to the school’s religious focus.

“After the revolution, there was this distinction made between Zionism and Judaism,” Tofighi said. “So when we speak about the Jews, it doesn’t have any negative connotations, because we make this distinction.”

Still, according to Hossein Soleimani, the school’s premise in studying other religions, including Judaism, is that the scholars’ outlook “must be positive.”

“We should hold the strong points and later see the weak points,” he said. “The quest should be a truth-finding journey, and all the religions should be looked at in a positive manner. Even the pagan religions.”

Tofighi admits that her father, Hojatoleslam Hossein Tofighi, who founded the school, didn’t start out with this attitude.

“He was in the beginning interested in polemics” — the battle to prove the untruth of other religions and the truth of his own — said Tofighi, who got her doctorate in literature and theology from the University of Glasgow’s School of Critical Studies. “But he soon realized that would not lead anywhere.” Over the course of the 1960s, she said, her father, a high-profile member of Qom’s hausa, or system of seminaries, became interested in the academic study of Judaism and other religions.

“He learned Hebrew when this was not common in Qom seminaries,” she said.

In 1995 the scholars close to the elder Tofighi launched the research institute that eventually became the University of Religions and Denominations. The school today enrolls between 400 and 500 graduate students who take courses in its several departments. These include a department devoted to the so-called Abrahamic religions — Christianity, Islam and Judaism; non-Abrahamic religions, such as Hinduism and Buddhism, and the religions of ancient Persia.

For all the academic nature of their work, certain kinds of intellectual approaches appear to be off-limits — in particular, modes of inquiry that require critical interpretation of the Quran.

Asked about the negative way in which the Quran depicts the Jews of Medina, and the way this depiction has been used at times in Islam to negatively characterize the Jews as a people, Abdul Rahim Soleimani denied that this required any exegesis or deeper historical inquiry.

“The answer is in the holy Quran itself,” he said. “Referring to Medina, the Quran says that the people of the book are not the same. Some are righteous and some are not. And maybe some will receive salvation.”

Tofighi added: “The majority of Muslims don’t think [the depiction of Jews in Medina] is for all Jews in all times. That’s why it doesn’t need any new interpretation.”