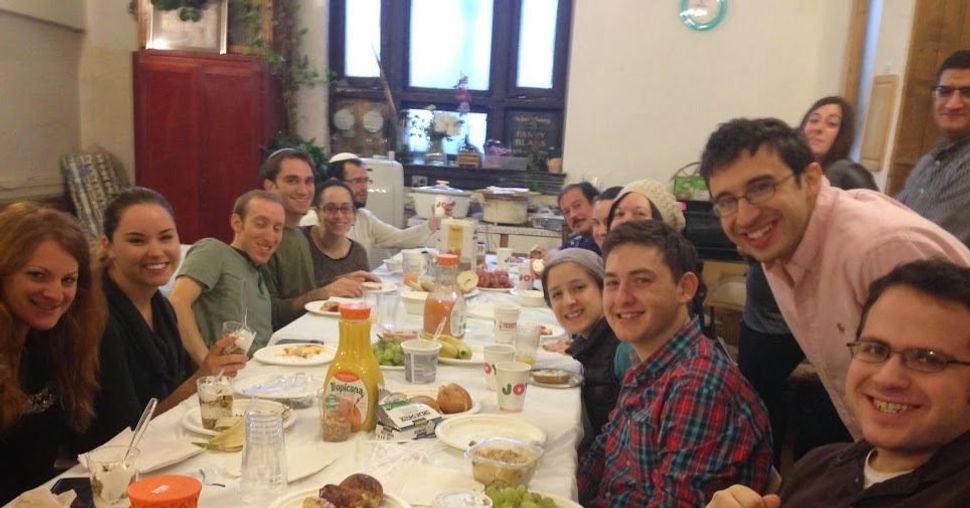 Members of The Beis share breakfast after singing the Hallel thanksgiving prayers for Hanukkah, December 2014, at Beth Hamedrash Hagadol, on 178th Street in Manhattan Image by Hart Levine

For years, the Beth Hamedrash Hagadol of Washington Heights, a large 99-year old Orthodox synagogue on 175th Street and Wadsworth Avenue, had barely been able to attract a minyan, the quorum of ten men required for worship. The 6 or 7 gray-haired veterans refused to give up trying, however, and continued meeting each Sabbath morning in the nearly empty sanctuary. They even paid several Russian-speaking Jews to help make the minyan.

Today, the venerable synagogue has become the locale for The Beis (Ashkenazi pronunciation of the Hebrew word bayit, or home) — an intentional Jewish community that attracts a diverse crowd of 40-50 Jews each Shabbos, many of them — young Jewish professionals in their 20s and 30s. This past Rosh Hashanah, about 180 people showed up to services led by Shlomo Gaisin, singer of the Hasidic soul band, Zusha, as a Juilliard-trained trumpet-player blew the shofar.

Many of those who were experiencing The Beis for the first time last week praised the energy and inspirational atmosphere. As one woman said in an email to Beis director Hart Levine after the holiday was over: “Spending Rosh Hashanah at The Beis was like entering into a spiritual oasis. The community you have created is a truly unique and magical place.”

A bit further north, near 185th Street, a diverse group of singles and young families were engaged in lively Rosh Hashanah services at another synagogue which had nearly gone under — the Fort Tryon Jewish Center. During the egalitarian, yet ritually traditional service, one 22-year old woman was leading her first High Holiday mincha, or afternoon prayer, while another young member, who had just moved in three weeks earlier, was already blowing shofar for the congregation.

And on Monday afternoon, both communities led their members down to the Hudson River for the tashlich service, tossing in pieces of bread representing the casting off of sins, symbolizing a fresh beginning for the new year. For many of the young participants, this was their first time taking part in the centuries-old tradition.

Washington Heights and its neighbor to the north, Inwood, is going through a remarkable rejuvenation of synagogue life, as growing numbers of young Jews choose the area over other previous hot spots like the Upper West Side and Brooklyn. The neighborhood, which had for years been home to thousands of German Jewish refugees of the Nazi genocide, lost many Jewish residents during the 1980s and 1990s due to the crack cocaine epidemic and soaring crime rate. As a result of the Jewish flight, many once-thriving local synagogues were forced to close or struggled valiantly to stay open.

This began to change about fifteen years ago, after the neighborhood became notably safer, in large part, to the addition of a new police precinct and a crackdown on criminals, including the arrest of drug-dealing police officers. In recent years, many Jews who could no longer afford the skyrocketing rent of Manhattan and Brooklyn, began seeing Washington Heights and Inwood as safe communities with an intact Jewish infrastructure centered around the YMHA of Washington Heights and Inwood, and the rapidly growing Mt. Sinai Jewish Center, an Orthodox shul on tree-lined Bennett Avenue.

But Martin Englisher, the director of the YMHA, says that that statistic is already out-of-date. “There must be close to between 28,000 and 30,000 Jews living here because we now have 40% more Jewish children in our youth programs and nursery school than we had four years ago,” he said.

“Washington Heights has tremendous appeal to young Jewish professionals,” remarked Rabbi Ben Greenberg, chief strategist for the Manhattan synagogue community at the UJA-Federation. “First of all, it’s still in Manhattan, close to the city center by way of the A and #1 train. Secondly, it’s still relatively affordable.”

Another reason for the dramatic increase in Jewish residents, especially among the Orthodox, is the construction of an eruv in 2006, enabling observant families to wheel their children to shul in strollers on Shabbos.

Mt. Sinai Jewish Center, which has experienced the greatest growth of all synagogues in the neighborhood, now has about 500 member units, most of them – between 20 and 35 years old, and the leadership and board is now governed by this age group. When Hart Levine and his wife, Yael, first moved to Washington Heights, they, too, prayed at Mt. Sinai, but Hart, who had done a good deal of Jewish outreach during his years at the University of Pennsylvania, soon felt that the shul’s exploding membership was not conducive to attracting unaffiliated Jews to synagogue life.

“It’s a great shul, but it’s hard to walk into a place with 400 people when you don’t know anyone, and when it seems that everyone dresses and acts the same,” he said.

Rabbi Ezra Schwartz, the spiritual leader of Mt. Sinai, agrees: “Hart was a student of mine at YU [Yeshiva University], a talented young man who was very involved with kiruv at the University of Pennsylvania. My feeling was that he wanted to reach out here too, but Mt. Sinai is a mainstream Orthodox shul, so probably not ideal for this kind of work.”

Schwartz told him about the situation at Beth Hamedrash Hagadol, how its lay leaders were struggling to keep the synagogue alive, and were looking for someone with energy to help make the minyan and save the shul, which they, in turn, could use as a base for their Jewish outreach.

Hart and Yael eagerly took on the task, and founded The Beis last summer. “We wanted to reinvent davening so that people would be comfortable showing up at shul,” he said. They set up a table on the street corner of Ft. Washington Avenue and 187th Street, handing out apples and honey to passersby and inviting them to join them for Rosh Hashanah services in their new shul. Many people expressed interest and took home a map indicating the location of the synagogue building. To the amazement of the aging lay leaders, 120 people showed up.

“It was a very diverse crowd,” Levine explained. “Singles and couples; young, middle-aged and elderly.” He estimated that about a third were Orthodox Jews who would have gone home for the holidays if they hadn’t gone to The Beis; a third were unaffiliated, and had just come back from Birthright, or simply loved old buildings; and a third had abandoned the religious lifestyle for various reasons. One former Hasid told him that this was the first time he was celebrating Rosh Hashanah in years; others were LGBTQ and didn’t feel comfortable going into a regular Orthodox synagogue.

Levine defines the Beis as “a very grassroots community”. During services, he occasionally interrupts the prayers to explain a liturgical poem or to encourage a member to share a thought related to it. There is also a monthly shabbaton with meals shared in people’s homes because, as Levine explains, “it’s nicer to eat in people’s homes than in a large shul building.”

On Sunday evenings, The Beis conducts an event called potluck learning. Instead of only one person preparing the shiur, or Torah discussion, many of the participants contribute their own relevant material.

The leader picks the topic (e. g. tradition vs. innovation), emails the text to all members, and participants might bring in a quote from the renowned theologian and philospher, Abraham Joshua Heschel; an art piece, or a poem. “It’s really crowdsourcing community-generated learning,” Levine said. There is no fee for membership at The Beis. Financial support comes from OU Next Gen, a division of the Orthodox Union, as well as private funding. There has also been some funding from the UJA Incubator for Intentional Jewish Communities.

According to Levine, people are joining The Beis is because it provides services and learning opportunities that appeal both to those seeking traditional Judaism and to those who “don’t fit into any one box”.

The revival of the Fort Tryon Jewish Center has been no less remarkable. The synagogue, which was founded in 1938 as an independent congregation, suffered a terrible blow in 2008 after a developer who had promised to cover the expense of renovating the building in exchange for air rights declared bankruptcy. The synagogue building was left in shambles for more than five years, resulting in ongoing litigation and leaving the congregation homeless.

The shul members began renting space from Mother Cabrini, a local Catholic High School, but after a charter school moved into the building, the Fort Tryon Center had to relocate once again. This past June, it moved into the Hebrew Tabernacle, a spacious Reform congregation nearby, where it continues to hold its services, Hebrew school and other programs.

In the past five years, under Rabbi Austrian’s leadership, the Fort Tryon Center has witnessed a dramatic turnaround, as membership continues to climb – in large part due to its creative programming. This past year FTJC inaugurated an arts and culture initiative, “Dream Uptown”, which explores the borders and boundaries of Washington Heights –geographically, politically and culturally. “Our aim is to show that Jewish life isn’t limited to synagogue and prayer,” Austrian explained.

The first segment, in March, featured the dramatic reading of excerpts from three contemporary plays, portraying the intersection of Jewish and Latino identity; in May, Jewish and Latino New York-based artists shared their short stories and poems with the audience in a local bookstore; and in June, the shul led a “multimedia art walk” through Washington Heights where, with the help of an app on their mobile devices, participants traced the neighborhood’s eruv while experiencing the evolving urban landscape through all the senses.

As a result of these innovative events, the Fort Tryon Jewish Center, which seemed doomed just 7 years ago, now consists of 130 member units, and keeps on growing.

“Most of our members are young singles, couples and families with young children,” Austrian said, adding: “It’s a blessing to see a shul that has more brit-milah ceremonies than funerals.”