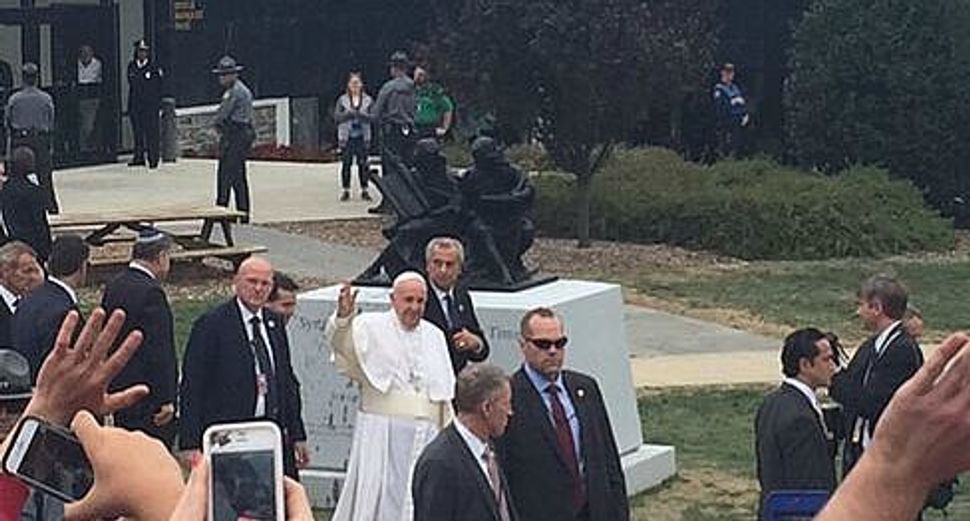 Nearly 50 years after the Vatican officially proclaimed Jews free of guilt in the killing of Jesus, Pope Francis made a surprise change to his schedule on the final day of his U.S. tour to convey his own message of respect for the Jewish people.

In an unannounced event, the pontiff stopped Sunday to bless a sculpture commissioned by the Institute for Jewish-Catholic Relations at St. Joseph’s University in Philadelphia that repudiates a centuries-old anti-Semitic image. At his side, was Rabbi Abraham Skorka, his good friend and literary collaborator, who had flown in from Buenos Aires, to be the keynote speaker at the dedication of the work, which took place on Friday.

The Pope and the rabbi had clearly cooked up the idea of this stopover in advance. They have done a lot of plotting together since they forged a bond over both matters of the spirit and of sport, some 16 years ago in their hometown.

Even though it’s been a half-century since Vatican II and the famed Nostra Aetate, countering centuries of anti-Semitism has been a priority for the pontiff, and Rabbi Skorka. 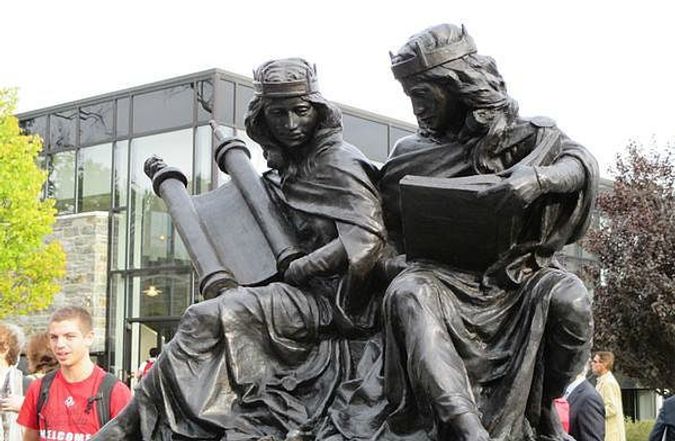 The sculpture 'Synagoga and Ecclesia in Our Time' on the campus of St. Joseph's in Philadelphia was created to counter centuries of anti-Semitic imagery in Catholic art.

One of Pope Francis’s early interviews was with an Israeli news crew, and Rabbi Skorka helped set it up. The Pope’s first trip abroad as pontiff was to Israel. Rabbi Skorka, who is Rector of the Seminario Rabinico Latinoamericano in Buenos Aires, accompanied him. Rabbi Skorka says he also had a hand in the meeting last year between then-president of Israel Shimon Peres, Palestinian Authority president Mahmoud Abbas and Pope Francis at the Vatican.

Rabbi Skorka called these gestures by Pope Francis, “a sign of his commitment to the Jewish people and even to Israel.

“Having me in many opportunities with him is a message for the Jews and for Christians as well, “ said Rabbi Skorka in an interview. “Our friendship is a paradigm of what has to be the great relationship between Jews and Christians.”

That the two should share a moment at the new sculpture on the campus of St. Joseph’s University as the pontiff blessed it with holy water is another example of both their friendship and their shared commitment to bridging their distinct religious beliefs. 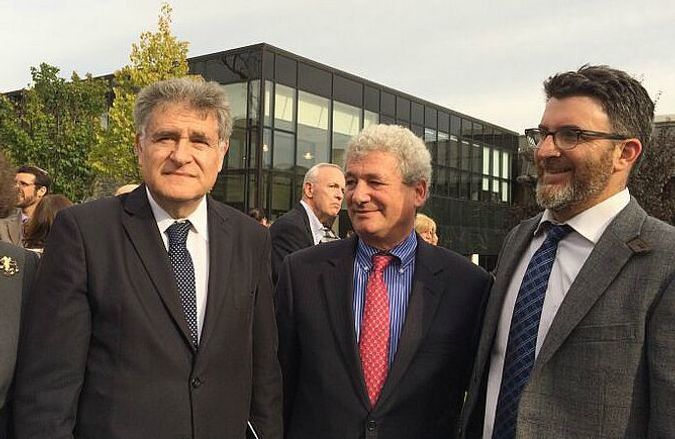 Titled “Synagoga and Ecclesia in Our Time,” the sculpture is of two women seated next to each other, much like two sisters. One holds a book, the other a scroll, and they are looking at each other’s sacred texts in mutual respect. (Nostra Aetate means ‘in our time.”)

The work was designed to counter a medieval motif depicting the triumph of Christianity over Judaism. In the ancient sculptures, found in churches all over Europe, the Christian “Ecclesia” stands proudly, wearing a crown, while the defeated “Synagoga,” is blindfolded by a serpent, her staff broken, her tablets slipping from her hand.

The pedestal of the new sculpture bears a quote from Pope Francis, “There exists a rich complementarity between the Church and the Jewish people that allows us to help one another mine the riches of God’s word.”

The work, by sculptor Joshua Koffman, is the result of a pioneering collaboration between Catholic and Jewish organizations in Philadelphia that started in 1967, two years after the Vatican’s declaration. Among the Institute’s partners are the American Jewish Committee, the Anti-Defamation League and the Archdiocese of Philadelphia.

“The sculpture was to mark the 50th anniversary of Nostra Aetate,” said Philip A. Cunningham, co-director of the Institute. “It took several decades for a new dialogue between Jews and Catholics to get moving. We had to learn to talk with each other,” he said, adding, “This new relationship of learning and enriching one another is embodied in the relationship of Pope Francis and Rabbi Skorka.”

Asked in an interview by the Forward on Sunday morning if he would make a public appearance with his old friend, Rabbi Skorka, who was headed through a barrage of security to lunch with Pope Francis, coyly shrugged.

But he did talk about some of the theology they share, namely their admiration of Abraham Joshua Heschel, who saw in the teachings of the early prophets, such as Isaiah, a contemporary call to social action a well as the importance of looking to mankind for the face of God.

“Heschel’s thinking has a lot to do with my own thinking and the way of thinking of Francis,” said Rabbi Skorka. “This generation of prophets taught us in a very special way that the way to approach God is first and foremost to honor human beings.”

“It was not a coincidence,” he said, that Pope Francis “mentioned Thomas Merton in his speech to Congress.” Merton, a Catholic writer who died in 1968, was a social activist who reached out to other religions.

A brief encounter during a reception line in Argentina had first sparked the relationship between the two high-ranking clerics. Then Archbishop of Buenos Aires, Jorge Mario Bergoglio, a fan of the soccer team San Lorenzo, knew that Rabbi Skorka supported the ever-losing River Plate. When the Rabbi approached, the Archbishop ribbed him, saying that River Plate was going to be “chicken soup.” Rabbi Skorka quipped back something that perhaps should not have been said in a holy place.

From then, their dialogue took off and in 2010, they co-authored the book “On Heaven and Earth,” in which they debated more than two dozen subjects, including the devil, divorce, globalization, poverty and the Holocaust.

They also shared their views on anti-Semitism. Rabbi Skorka pushed Bergoglio on his opinion about opening the Vatican documents under Pope Pius XII, to understand the Church’s role in World War II.

In the book, Bergoglio responds, “What you said about opening the archives relating to the Shoah seems perfect to me. They should open them and clarify everything. Then it can be seen if they could have done something… We do not have to be afraid of that. The objective has to be the truth.”

Pope Francis has yet to open the archives, but Rabbi Skorka is convinced he will. “What he says is what he thinks and what he does. If he said that the archives must be open, okay, give him the time. It’s a very sensitive point, which means it’s not so simple. There are thousands of documents. Who’s going to analyze them?”

But having watched his friend take measures as Pope “to correct everything he considered as incorrect in the church… I suppose he will realize this issue as well.”

Dotty Brown writes occasionally for the Forward. She blogs at www.unretiring.blogspot.com