Why Does Ben Carson Keep Talking About the Nazis? 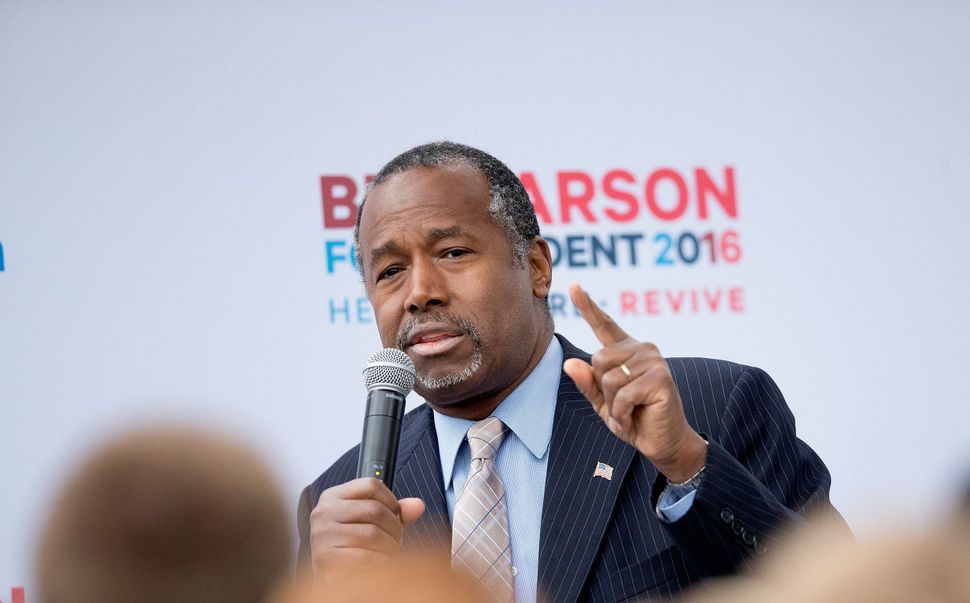 Ben Carson, the flavor du jour in Republican politics, may be challenging Donald Trump’s status as front-runner in the GOP’s primary race. But the pediatric neurosurgeon-turned-would-be-president is far from the kind of candidate that many mainstream Republicans, including many Jews, have come to know.

Alongside his classic conservatism on social and family issues, Carson has caught the Jewish community’s attention with a series of startling comments touching on the Holocaust, religious qualifications for public office and the parallels between the American government and Nazi Germany.

Some have triggered unusually harsh rebukes from the Jewish community, such as the Anti-Defamation League’s statement, denouncing Carson for describing Muslim Americans as “un-American” and unfit for the presidency.

Several critics found the comment ironic, coming from a candidate whose own faith — Seventh-day Adventist — has itself come under frequent attack for its heterodox Christian doctrines. In what could be a further sign of the GOP’s deteriorating political discourse, as Carson surged in the polls, Trump belittled his religious beliefs, saying: “Look, I don’t have to say it, I’m Presbyterian…. Boy that’s down the middle of the road, folks…. I mean, Seventh-day Adventist, I don’t know about. I just don’t know about.” 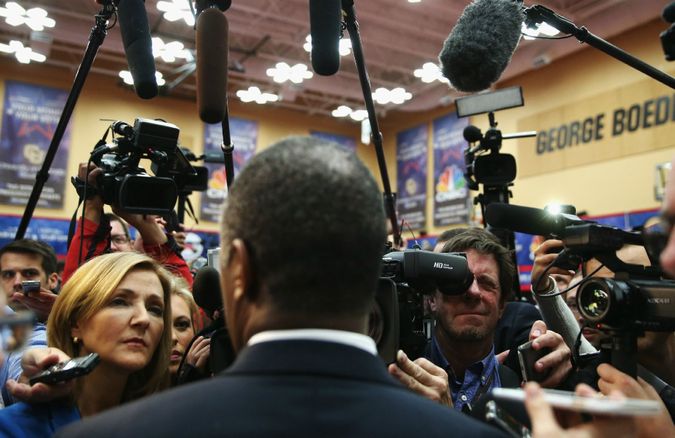 But whatever one thinks of Carson’s association with the small Christian denomination, which observes the Sabbath on Saturday, it can hardly explain his politics, and the views regarding Jews and the Holocaust that seem to stem from them.

“His conservatism doesn’t come from his Adventism, it must have other origins,” said a bewildered Edward Allen, professor of religion at Union College and president of the association for Seventh-day Adventist Historians.

Noting the church’s positions in favor of strong church-state separation and gun regulation, among other things, he said, “There are very few policies Carson has talked about that rise from Seventh-day Adventist beliefs.”

One notable position that does seem to stem from church teachings is Carson’s tax policy, which is based on the notion of tithing, a key obligation for Adventists. Carson has suggested a flat tax rate for all income levels, a reform he believes would make the system simpler and will treat all taxpayers equally.

In one of his most controversial statements, Carson suggested in October that if European Jews had had free access to guns during the Holocaust, “the likelihood of Hitler being able to accomplish his goals would have been greatly diminished.”

This notion was flatly rejected by scholars and by Jewish organizations. In The New York Times, Alan Steinweis, a University of Vermont historian of the Nazi era, pointed out that, in fact, it was only in March 1938 — some five years after Hitler came to power — that the Nazi regime promulgated its weapons law, which required police permission only for ownership of a handgun.

“If, as Mr. Carson maintains, the Nazi regime made it a priority to disarm the German population, then why did it wait more than five years to issue such a law, and why did it limit licensure to handguns?” Steinweis asked.

Later, the Nazis barred Jews from possessing weapons of any kind. But noting that Jews constituted less than 1% of Germany’s population, Steinweis called it “preposterous” to argue that Jews at any point could have mounted resistance “against a systematic program of persecution implemented by a modern bureaucracy, enforced by a well-armed police state, and either supported or tolerated by the majority of the German population.”

In a press release, Jonathan Greenblatt, ADL’s national director, agreed, stressing that “gun control did not cause the Holocaust; Nazism and anti-Semitism did.”

Carson added that “many people in the Jewish community, including rabbis,” had contacted him to say: “‘You’re spot on. You are exactly right.’”

Carson’s special draw to Holocaust-era comparisons and references makes him stand out in the crowded Republican presidential field. When talking about President Obama’s policies, Carson routinely sees parallels between the conduct of the U.S. government and that of the Nazi regime. “Most people in Germany didn’t agree with what Hitler was doing,” he said in a August 2014 interview. “Exactly the same thing can happen here in this country if we are not willing to stand up to what we believe in.” He suggested that people read Hitler’s “Mein Kampf” to see the similarities for themselves.

“I know you’re not supposed to say ‘Nazi Germany,’ but I don’t care about political correctness,” Carson said in March. “You had the government using its tools to intimidate the population. We now live in a society where people are afraid to say what they actually believe.”

Carson’s Nazi references are in fact nothing new. They are laced throughout his books, media interviews and political speeches. He uses Nazism to describe a state of affairs in which citizens stand by as totalitarianism takes over. He invokes Hitler as a parallel to evil people he sees in American society, such as the founder of Planned Parenthood.

When asked, Carson told reporters he did not make a comparison between Obama and Hitler. He said he purposely talks about Nazi Germany “because I knew the left wing would go crazy: ‘He said Hitler!’” Carson’s frequent Nazi references led The Washington Post to crown him as “the biggest fan of Nazi metaphors in politics.”

Carson’s favorite scripture figure is King Solomon, the biblical monarch known for his wisdom when ruling over Israel.

Carson also sees similarities between his life and the famous fable of King Solomon who, when faced with two women claiming the same baby, ordered the baby to be divided in half. “That’s when I became very well known, when I divided babies,” said the neurosurgeon famous for his success in separating conjoined twins.

Carson has thus far not been able to draw significant Jewish support for his run, nor has he enlisted any major Jewish backers, as most establishment Jewish donors have distanced themselves from him, as well as from Donald Trump.

In a sign that he may not be interested in this type of financial support, Carson announced recently that he would not attend a December presidential forum organized by the Republican Jewish Coalition. The RJC’s chief funder is Las Vegas billionaire Sheldon Adelson, and many of the Jewish community’s top Republican donors sit on the group’s board.

Still, when it comes to Israel, Carson’s views and statements fall squarely within mainstream GOP policy. He has expressed strong support for Israel and for its government’s policies, describing Prime Minister Benjamin Netanyahu as “a great leader in a difficult time.”

During his first visit to Israel, last December, Carson pledged his support for Israel and lashed out at President Obama’s treatment of the Jewish state. The trip was sponsored by Face of Israel, a small organization aimed at promoting Israel’s image across the world.

Criticism of Israel’s settlement policy, he said, was exaggerated. Carson also suggested that Egypt absorb parts of the Palestinian population as part of a long-term solution to the conflict. This year, as the debate over a nuclear deal signed with Iran heated up, Carson spoke out forcefully against what he described as a “rotten deal” and accused the White House of using “ugly tactics” to win support for the agreement.

Another position that has set off alarms among American Jews was Carson’s objection to having a Muslim American serve as president of the United States and his claim that Islam is not “consistent with the Constitution.”

Jewish groups were quick to condemn Carson for his comments, which not only offended Muslims, but also raised the specter of a discriminatory religious test for public office.

But as Allen suggested, Carson’s views and positions, though heavily laden with religious references, often have no basis in the theology of his own Seventh-day Adventist faith.

Abortion, for example, which Carson compares to the evil of antebellum American slavery, is viewed quite differently by Adventists, who discourage the practice but still perform abortions in hospitals run by the church. Carson’s views on Second Amendment issues are also at odds with those of his church, which has adopted a position opposing the free sale of assault weapons. When it comes to freedom of religion, Carson’s support for discrimination against Muslim presidential candidates stands in stark contrast to the Seventh-day Adventists’ historic emphasis on separation of church and state and the importance of religious liberties.

According to some analysts, Carson’s conservatism is likely aimed at members of an entirely different denomination — Christian evangelicals who, according to polls from previous elections, make up more than half of Republican caucus goers in Iowa, the first state to select its candidate.

“He says things that accord with the basic orientation of conservative evangelicals,” said Dennis Goldford, professor of political science at Drake University, in Des Moines, Iowa. Historically, evangelicals have treated Adventists with suspicion, questioning their Christianity, but these doubts have subsided in recent decades. “So, even if there are theological differences, Carson’s more general religious values match those of evangelical voters,” Goldford added.

Why Does Ben Carson Keep Talking About the Nazis?