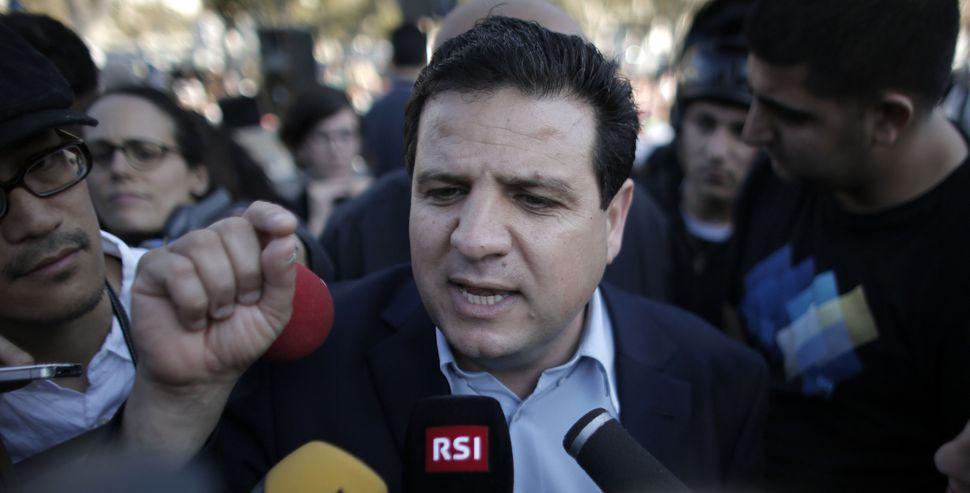 Ayman Odeh, leader of the Arab political parties in the Israeli Knesset, backed out of a meeting with Jewish communal executives on December 10 after learning that the meeting would be held in offices rented from the Jewish Agency for Israel.

The cancellation, which soured a historic visit by Odeh that included a number of meetings with American Jewish groups, highlighted the ideological distance between even the most moderate Israeli Arab politicians and the American Jewish mainstream.

“When I went into the building today [I saw] the building is of the Jewish Agency and the World Zionist Organization,” Odeh said in an already-scheduled interview at the offices of The Forward shortly after the incident. “I felt like I’ve been deceived.”

Malcolm Hoenlein, president of the Conference of Presidents of Major American Jewish Organizations, which was scheduled to host Odeh, said that he was angered by the lawmaker’s refusal to enter the the Manhattan headquarters that the group rents from the Jewish Agency. “It’s outrageous that a member of Knesset would say that I can’t go into a place because it has Zionist associations,” Hoenlein said. “He doesn’t have a problem taking [his Knesset] paycheck.”

Odeh told the Forward that he had not known that the meeting would be held in a Jewish Agency space, and offered to meet instead at the offices of the Union of Reform Judaism, which are in the same building. Hoenlein said that the URJ’s conference room was unavailable, and that, even if it had been available, he would not have agreed to switch venues.

“Why would I succumb to that?” Hoenlein said.

A URJ spokesman said that someone in the group’s mailroom had told a caller that the URJ’s conference room was booked, but that no URJ executive was consulted. Rabbi Rick Jacobs, the URJ president, published a statement on December 11 criticizing Odeh for canceling on the Conference of Presidents, saying that he was “profoundly disappointed.”

“I believe MK Odeh made a deeply troubling decision by refusing to attend the meeting because it was held in the offices of the Jewish Agency,” Jacobs said. “His decision doesn’t support the important cause of dialogue to promote equality and coexistence in Israel.”

URJ leaders had met separately with Odeh earlier in the week.

“It’s not that I’m happy about what happened,” Odeh told the Forward. “I wanted to talk to them.”

Odeh, 40, is a socialist politician from a left-wing Jewish-Arab party who has united Israel’s ideologically diverse Arab parties for the first time in decades. His wide-ranging tour in the United States has been followed closely by Israel’s Arab press. His meetings with Zionist groups have been politically risky, given the breadth of his coalition, which includes Odeh’s party Hadash, the nationalist Balad, and the southern branch of Israel’s Islamic Movement, among others.

“He is taking a lot of criticism here from his own constituency,” said Shuli Dichter, executive director of Hand In Hand, an organization that runs bilingual Hebrew and Arabic schools in Israel. Dichter and Odeh formerly worked together at the Israeli civil rights organization Sikkuy. “He’s been pushing the limit as far as possible… Meeting with the Conference of Presidents davka in the Jewish Agency building was one step too far, and we must be attentive to this.”

When asked why he had refused to speak there, Odeh pointed to the historical role of the Jewish Agency in the expropriation of Palestinian land, and to its ongoing role in land disputes in Israel. “This institution harmed us very deeply,” he said.

Odeh referred specifically to the unrecognized Arab villages in the Negev, and to the repeated destruction of the village of Al-Arakib. Though the conflict at Al-Arakib involves the Jewish National Fund and not the Jewish Agency, Odeh and his aides argued that the groups are closely entwined.

“We do not boycott the state of Israel,” Odeh said. “We work for equality… In the complex situation we are working in… there are three government offices we wouldn’t work with, and some Zionist organizations.”

With very few historical exceptions, Israeli Arab members of Knesset do not serve on Knesset committees dealing with foreign affairs, absorption, or security. And while the Jewish Agency is seen among American Jews as an apolitical development organization, Arab citizens of Israel say it has played a major role in denying them the same rights and benefits available to Israeli Jews. The group has developed Jewish housing throughout Israel’s history on land owned before 1948 by Palestinians.

“The Arab citizens in Israel do feel the consequences of the Jewish Agency’s activity also now,” Dichter said. “It’s not something that was done in the past and now has no impact on our lives.”

In a statement posted on Facebook, Jewish Agency chairman Natan Sharansky said that the Jewish Agency runs programs that benefit “thousands of Arab Israeli families.” He cited a Jewish Agency high school for Bedouin children in the Negev and a mentorship program, among others. “Along with our core mission of ingathering the exiles of the Jewish people,” Sharansky wrote, “The Jewish Agency is proud to serve all citizens of Israel, regardless of religion or ethnicity.”

In his visit to the Forward’s offices hours after the aborted Conference of Presidents meeting, Odeh spoke mostly in Hebrew, with one aide acting as a translator. Wearing a black suit and, unusually for an Israeli politician, a tie, he sprinkled his Hebrew with biblical phraseology. Odeh described walking a narrow line, cooperating with the Israeli system while pushing for rights for Israel’s Arabs within that system.

“We are a part of an agreement of historical reconciliation,” he said. “You can’t ask me to be a Zionist, you can’t ask me to justify the ways and means the state was created… We want a democratic state, a civil state.”

Odeh differs from the boycott, divestment and sanctions movement, which dominates Palestinian nationalist activism in the United States. Though he backs a boycott of the settlements, he does not back a boycott of Israel proper.

“No one is speaking about the Arab citizens of Israel,” he said. “We are 20% of the population in Israel, and we want to be part of the political sphere… They are trying to push us away from legitimacy.”