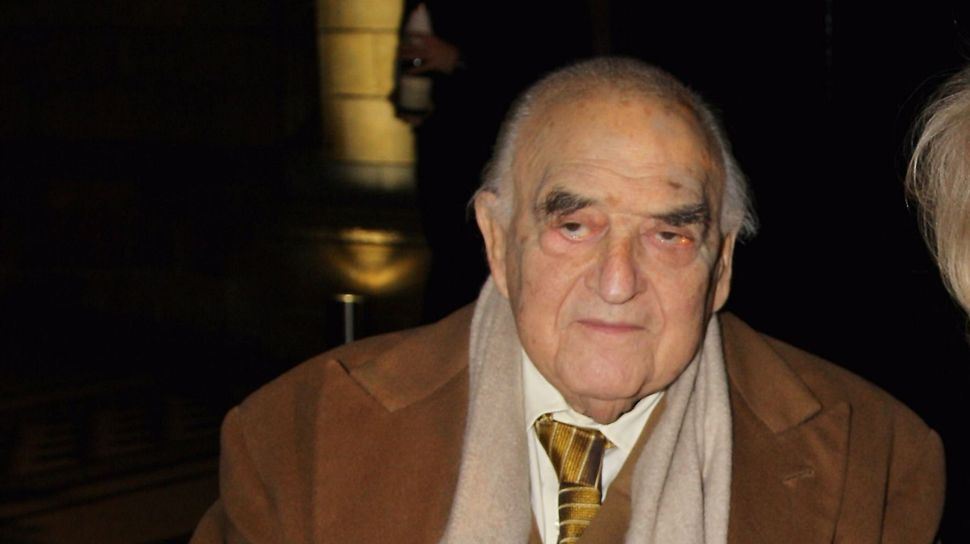 George Weidenfeld, a Holocaust survivor who famously repaid the debt of honor to those who saved him by bankrolling the rescue of Christians from Islamic State, has died at 96.

The Jewish publishing magnate credited Christians with helping him escape the Nazis and went on to build one of the most influential publishing houses in postwar Britain.

“George Weidenfeld was one of the most remarkable figures of post-war Europe,” the former British Prime Minister Tony Blair said. “An extraordinarily successful businessman, philanthropist and thinker, he was a supreme influence on a whole generation of European politicians. I benefitted enormously from his wisdom and from his encyclopedic knowledge of the world.

“Above all he was a man of huge compassion and humanity never ceasing to wonder how he could make a difference to the world and then making it. It was a privilege to know him.”

Born in Vienna in 1919 and a graduate of the University of Vienna, George Weidenfeld escaped Austria for the United Kingdom in 1938 at the age of nineteen following the German invasion and subsequent Anschluss. After working at the BBC Overseas Service, Weidenfield obtained British citizenship in 1947 and in 1948 he—along with his business partner, the late writer and politician Nigel Nicholson—founded the publishing house Weidenfeld & Nicolson, since 1991 a subdivision of the Orion Publishing Group.

Weidenfeld & Nicolson is best known as the house that published Vladimir Nabokov’s “Lolita,” in 1959, a novel that had been banned in Britain for four years prior, on the basis of its deception of a sexual relationship between a middle-aged man and a twelve-year-old girl. Books like Prime Minister Harold Wilson’s “New Deal for Coal,” Isaiah Berlin’s “The Hedgehog and the Fox,” and James Watson’s “The Double Helix” all helped to establish the reputation of Weidenfeld & Nicolson in its earliest years, later home to heavy hitters like Lyndon Johnson, Golda Meir, and Henry Kissinger.

Weidenfeld was “a tireless worker for Israeli, Jewish and other causes,” in the words of Board of Deputies of British Jews President Jonathan Arkush, serving as Israeli President’s Chaim Weizmann’s aide for a year not long after the state’s founding.

Weidenfeld last year launched an initiative to rescue 20,000 Syrian Christians from the civil war in that country. The Weidenfeld Safe Havens Fund was intended as a tribute from a survivor of the Holocaust to those Christians whom had helped him and other young Jews escape Nazism before it was too late. Last July, 150 Syrian Christians were airlifted to Warsaw as part of that project, the Jewish Chronicle reported.

“I had a debt to repay,” Weidenfeld said when the initiative was launched. “It applies to so many of the young people who were on the Kindertransports. Quakers and other Christian denominations brought those children to England. It was a very high-minded operation and we Jews should also be thankful and do something for the endangered Christians.”

Weidenfeld credited the Quakers and the Plymouth Brethren as life-savers who fed and clothed him and helped him to reach Britain in 1938, The Independent reported.

Weidenfeld spearheaded Weidenfeld Safe Havens Fund, which last summer supported the flight of 150 Syrian Christians to Poland on a privately chartered plane to allow them to seek refuge, making them the first beneficiaries of the resettlement project. The fund aims to offer 12-to-18 months of paid support to the refugees.

Weidenfeld received a knighthood in 1969 and was made a life peer in 1976, taking up the Labour whip in the House of Lords. He disassociated himself with the Labour Party in 1981.

George Weidenfeld at his 1966 wedding to Sandra Mayer. Image by Getty Images

Leaders from the British Jewish community were quick to pay tribute to Weidenfeld. “Saddened to hear of the passing of Lord Weidenfeld, a towering figure in the Jewish community whose legacy will be one of great compassion,” the Chief Rabbi Ephraim Mirvis tweeted. “Lord Weidenfeld was a leader, thinker and businessman whose thoughts and understanding of our changing world were sought after by leaders the world over,” Sir Mick Davis, Chairman of the Jewish Leadership Council, said.

“He had a broad view of the world and how it could be shaped for the benefit of mankind. He was innovative and tireless in his search for solutions to the challenges of our time.”

“George Weidenfeld was so much larger than life, and so inexhaustible in energy, that it is hard to believe he is no longer with us. I knew him not only as a publisher, a connector, a man who seemed to know everyone, but as an elemental force for good. He was always thinking of new ways to fight prejudice, heal ancient wounds, and bring peace to troubled regions of the world,” the former Chief Rabbi Jonathan Sacks said. “He was bold, he was visionary, he was hard working, and he was fun. He was a giant, and without him the world will seem a smaller and less vivid place.”

Warm words about Weidenfield’s life and legacy came from around the world. “George Weidenfeld embodied the best of British, German, Jewish thought and culture. With his death, an era end,” the author and Washington Post columnist Anne Applebaum tweeted. “I am deeply saddened that George has left us. He had great wisdom, and until his death was a friend who always gave me valuable advice,” Ronald Lauder said. “He knew right from wrong. Throughout his life, he strove to ensure that good will triumph over evil. He will be greatly missed.”

Chief Rabbi Pinchas Goldschmidt, President of the Conference of European Rabbis, said, “Lord Weidenfeld was a man who epitomized community service and leadership whilst his perception of the new challenges facing Europe was both unique and powerful. One of Lord Weidenfeld’s last acts, rescuing Christian families from Syria and Iraq and resettling them elsewhere exemplifies the legacy of a man we should all endeavor to replicate.”