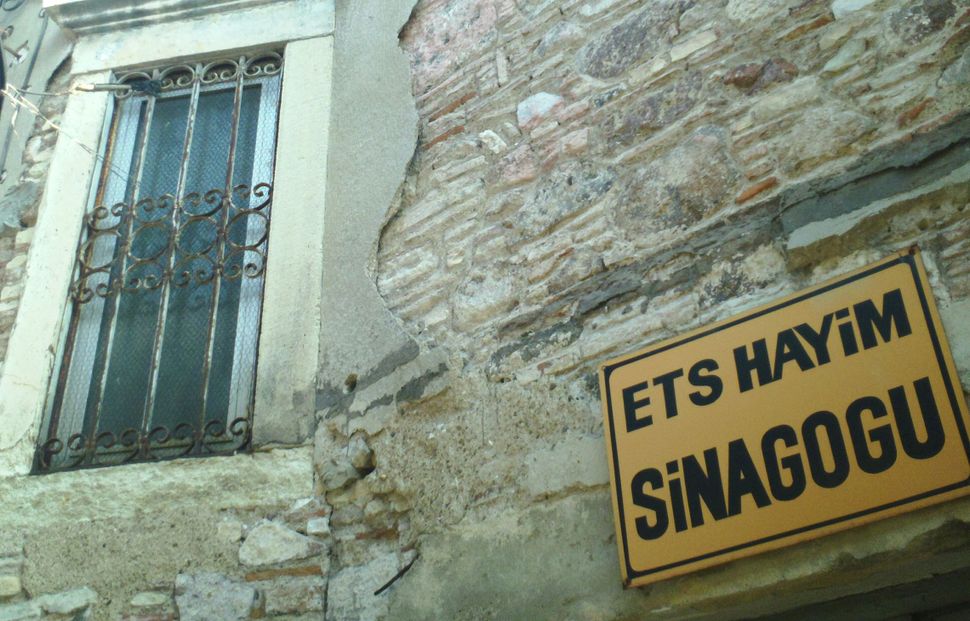 A prominent Turkish-Jewish businessman and politician, Cefi Kamhi is chairman of an Istanbul-based consulting agency and television distribution company. He heads three councils for Turkey’s foreign economic relations board, and represents his home country in the European Jewish Parliament. His wife is Muslim. 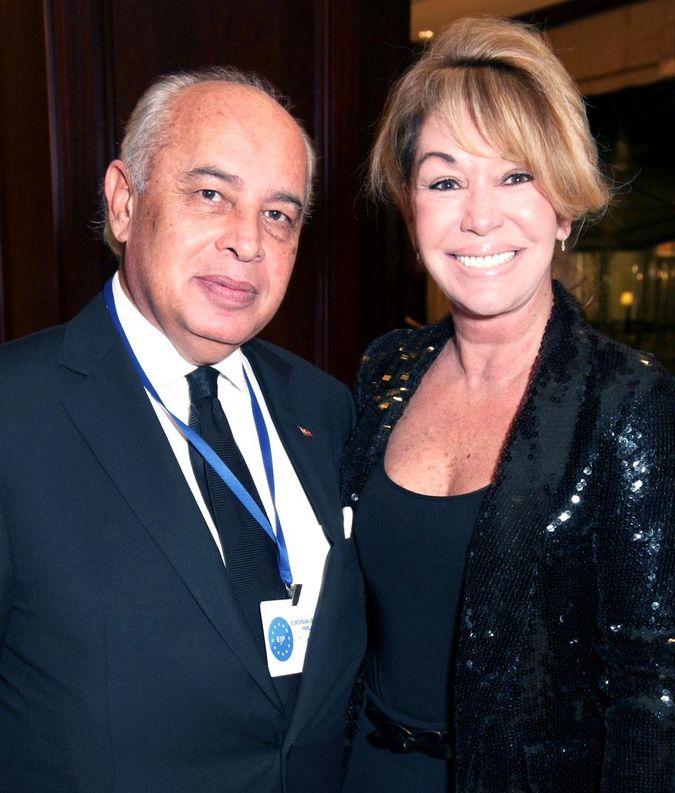 Yet after several assassination attempts, Kamhi is under 24-hour police protection to ensure his safety. Over a choppy Skype connection from his Istanbul office, he smiles as he pulls out a small black pistol. He carries it with him for protection, but also knows it probably won’t be enough should he really need it.

“Terrorists will always find a loophole — our synagogues have been bombed many times,” said Kamhi, who served in the Turkish parliament from 1995 through 1999.

After an Istanbul suicide bombing attack in March that killed four people, three of them Israeli tourists, Turkey’s Jews are on even higher alert than normal, which involves constant surveillance of schools and synagogues.

Kamhi is a powerful member of the Turkish elite, but he is not safe. His story is symbolic of Turkish Jewry. They are fiercely proud to be Turkish, but they are also worried about whether the country holds a future for them. Some are departing for Israel and elsewhere; others bristle at even the thought of leaving their home country.

Whether they go or stay, the stakes are high for world Jewry. The community in Turkey is the last outpost of Sephardic Jewry and its almost-extinct language, Ladino, experts say. Sephardic Jews settled in Turkey, Greece and the Balkans after Spain and Portugal expelled them in the 15th century. Nazi Germany destroyed communities in Greece and the former Yugoslavia, while Bulgarian Jewry survived the war and migrated en masse to Israel. 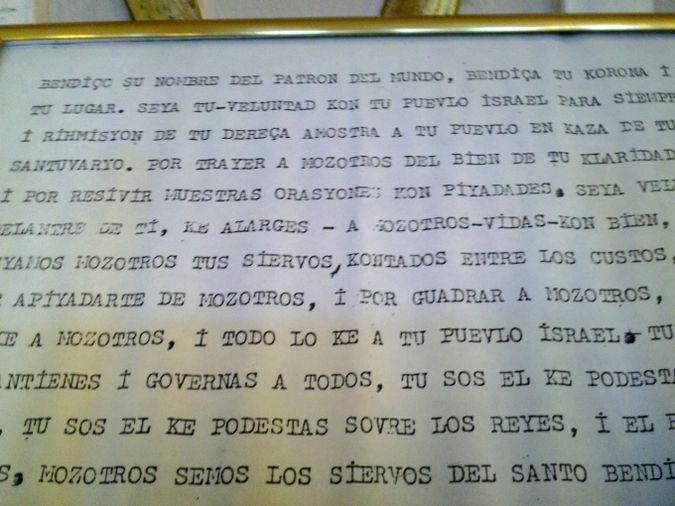 A Jewish prayer in Ladino in Izmir Image by Shmuel Aiello

“There is really no other community, other than the Turkish one, left of that larger group. It’s a remnant community of a much larger group that has disappeared,” said Aron Rodrigue, who is an expert on Jewish Ottoman history at Stanford University and grew up in Istanbul.

Other communities in Islamic countries — although not Sephardic, since they did not come from Spain or Portugal — are mostly gone as well.

“There is a community in Iran, there are many fewer in Morocco, and nobody left anywhere else,” Rodrigue said.

At its height in the 1920s, the Turkish community numbered about 80,000. Today, there are about 15,000 Turkish Jews, concentrated mostly in Istanbul. That’s big enough to sustain a rich communal life, but also small enough to leave.

One 25-year-old Turkish Jew, whose employer does not permit her to speak publicly about her background, told of growing up in Izmir, a coastal city she described as “a big family.” She has fond memories of the vegetable frittata and leek meatballs that Turkish Jews eat on the Sabbath, and she likes to talk about the way she could identify other Jews on the street, especially those of her grandparents’ generation, by their Ladino-accented Turkish.

Intermarriage with Turkish Muslims is both common and generally accepted, Kamhi said.

“There are quite a few marriages between Muslims and Jews in the last 20 years because we don’t have a big enough [Jewish] population to give us a choice,” he joked.

Socioeconomic similarities bring Jews together with their non-Jewish neighbors, the young woman who asked to speak anonymously said. She was the only Jew in her high school, but didn’t experience any anti-Semitism. She attributes good relations between Jews and Muslims to the fact that Jews mainly live in affluent neighborhoods, where the inhabitants are often “white collar, more secular, more westernized Muslims from the upper and upper-middle classes,” and less likely to hold anti-Semitic opinions.

But in many instances, Jews feel uncomfortable, or even unsafe, due to a political climate in which newspapers and politicians often demonize Jews. The young woman from Izmir recently left Turkey to settle in Israel.

“I love Turkey, but I always wanted to leave and build a future outside of Turkey. I just always felt that Turkey was not a comfortable place, that I would always be reminded that I’m Jewish,” she said. 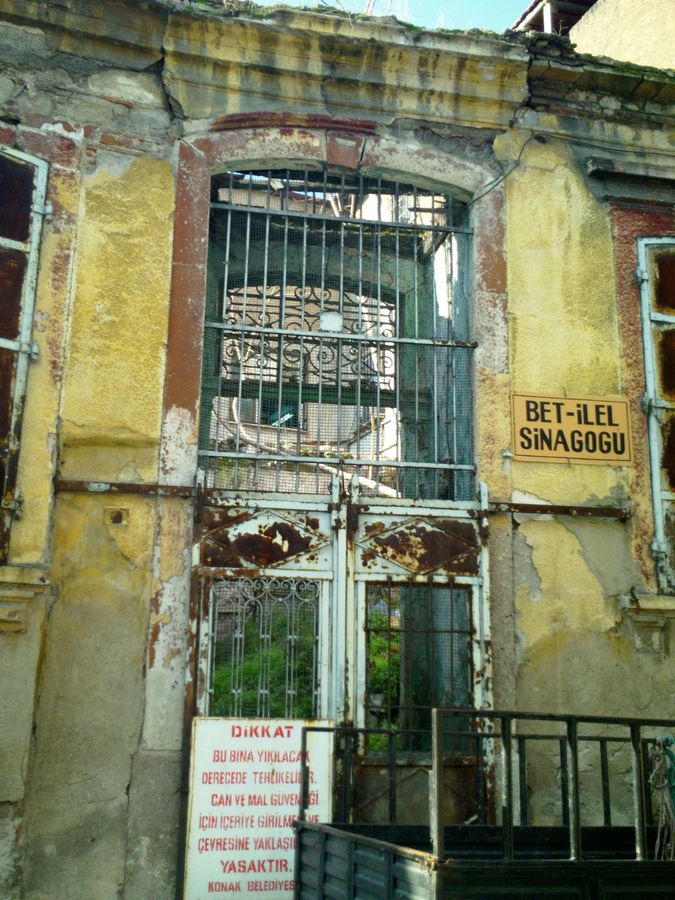 An Izmir synagogue in disrepair Image by Shmuel Aiello

She is not the only one. “My friends right now see a trend of people wanting to move to Israel, just because they can’t handle anti-Israel sentiment and blatant anti-Semitic language that’s been used,” she said. “They think, ‘I can handle it, but I don’t know if I want my child to handle it.’”

Anti-Semitism in the political discourse, rooted in but not confined to anti-Israel sentiment, is the biggest problem facing Turkish Jews today, Rodrigue said.

While Israel and Turkey previously enjoyed good relations, they soured after Israel’s raid of Turkish ship MV Mavi Marmara in 2010, during which Israeli soldiers boarded the Gaza-bound flotilla, killing one Turkish-American and eight Turkish activists, who they said turned violent.

“The anti-Semitism always starts with Israel and what Israel is doing. They [government officials and Islamist newspapers] always use Israel; from there they move to the Jewish influence,” Kamhi said. “There is nothing [factually bad] they can say about Jews who are living a simple life — their only gateway is to start anti-Semitic arguments using Israel.” 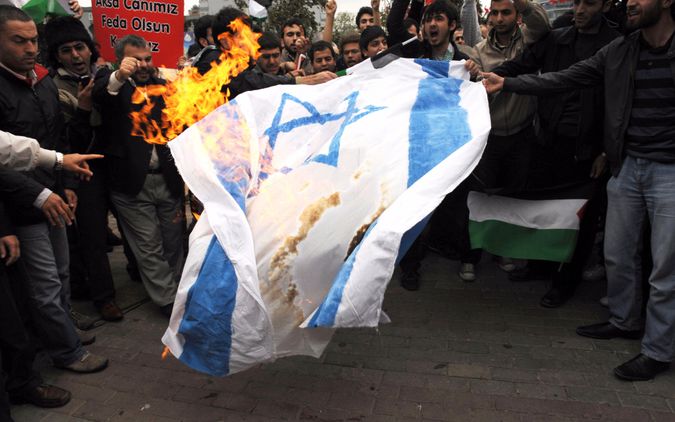 Most Turkish Jews keep a low profile and avoid speaking publicly about Judaism; Kamhi’s high profile makes him an exception. While many Jewish communities across the world did the same historically, Turkey is one of the few places where the community is so intensely private that it is still almost inaccessible to outsiders.

Keeping a low profile was the “norm” for many Jewish communities, Rodrique explained. “All of this started to change in Europe and other places in the modern period, but [Turkish Jews] have not come out of it — that’s the big difference,” he said.

All official Jewish institutions contacted by the Forward — including synagogues, a Chabad emissary, a Jewish newspaper and the official community organization — denied or did not respond to requests for interviews. Many community members did the same, even when offered the opportunity to speak anonymously.

“The Jews in Turkey keep their mezuza indoors. My grandmother won’t talk about anything that has to do with Judaism in Turkey over the phone — she’s scared that the phones are tapped,” said Odin Ozdil, who grew up in Izmir but moved to the United States with his family in 1984, at the age of 5. “They’re not modern in some psychological sense, they keep their head down when it comes to issues in matters of Judaism. There’s a meekness over there.”

Living as a Jew in Turkey has always been challenging, but it was often better than life elsewhere.

Historically, Turkish rulers treated Jews well, relative to their European counterparts. Following the expulsion of Jews from Spain in 1492, Sultan Bayezid II welcomed and encouraged the refugees to settle in the Ottoman Empire. Jews (and other non-Muslims) had to pay an additional tax but were mostly left alone and saw living under Islamic rule during the Ottoman period, which ended only in the twentieth century, as “favorable to living under Christianity,” Naar said.

When the empire ended and the Republic of Turkey was created in 1923, Jewish leaders actively chose to avoid unnecessary attention, said Devin Naar, an expert on Sephardic Jewry at the University of Washington. They knew that the consequences for speaking out against the state could be dire: The Armenians were massacred, Orthodox Christians were expelled to Greece.

“The official Jewish leadership wound up taking a perspective that is summarized by the Ladino term kayadez, which means ‘silence,’” Naar said. “It means keep a low profile, go about your business, go to the synagogues, be good businessmen, support the state and its enterprises and don’t make a lot of noise.”

The Jews were so successful in their efforts to show the congruence of their interests and those of the Turkish state that they became what the government has called “the model minority,” Naar added.

Even if the government largely left Jews alone, anti-Semitism still existed in some sectors of society. The current government, lead by President Recep Tayyip Erdogan, has moved the country in a more Islamist direction, bringing anti-Jewish attitudes closer to the forefront, Rodrigue said.

“People who used to keep their peace no longer kept their peace, and this got more exacerbated every time there was an incident in Israel,” Rodrigue explained.

Turkish Jews also have more recent reasons to maintain a policy of kayadez. Erdogan recently cracked down on journalists, which makes people afraid to express views containing even implicit criticism of the government.

Istanbul’s synagogues have been bombed. The most deadly attack targeted two synagogues, Neve Shalom (the main synagogue, whose name means “Oasis of Peace”) and Bet Israel, leaving 25 people killed and wounding 300, in 2003.

“The Jewish community has become accustomed to living in high security,” Fishman said. “This is not an ideal situation, this is what they have to live with.” 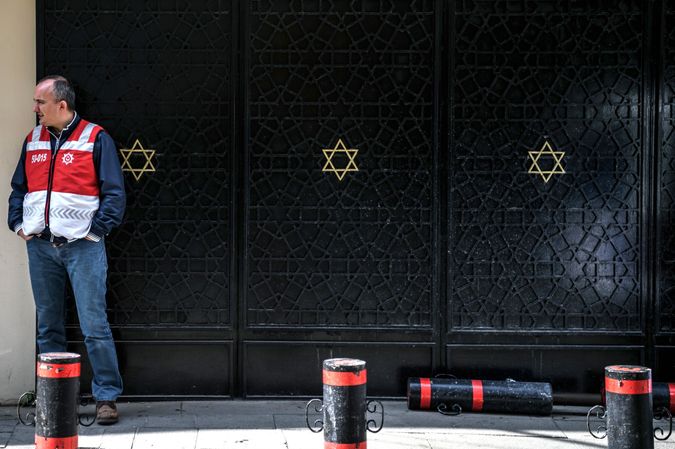 Fishman said that the government has in the past year and a half made some attempts to limit anti-Semitism in the public discourse. “The government saw it was too much, and they put a lid on it,” he said.

The government may be in part motivated by efforts toward a rapprochement with Israel as well as by demands from American Jewish groups, such as the Anti-Defamation League and the American Israel Public Affair Committee, which met with Erdogan during his visit to the United States in March.

“There’s no doubt that Turkey is interested in reconciling with Israel, and that [decreasing anti-Semitism in the public discourse] is also a demand that comes up with the [American] Jewish lobbies,” Fishman said.

At the same time, the government turns a blind eye to certain media outlets that are openly anti-Semitic.

“You have pro-government newspapers where anti-Semitism can be found. If they [the government] wanted to [stop it], they could in a second,” Fishman said.

But these troubles seemed less apparent at a December gathering, captured on YouTube, across the street from an Istanbul mosque. The melodic sound of the traditional Arabic call to prayer pierced the air as Muslim and Jewish attendees gathered for the first public lighting of a menorah in modern Turkish history.

The community doesn’t live in Turkey only for themselves, Kamhi said.

“We do it for the Jewish existence,” he added.