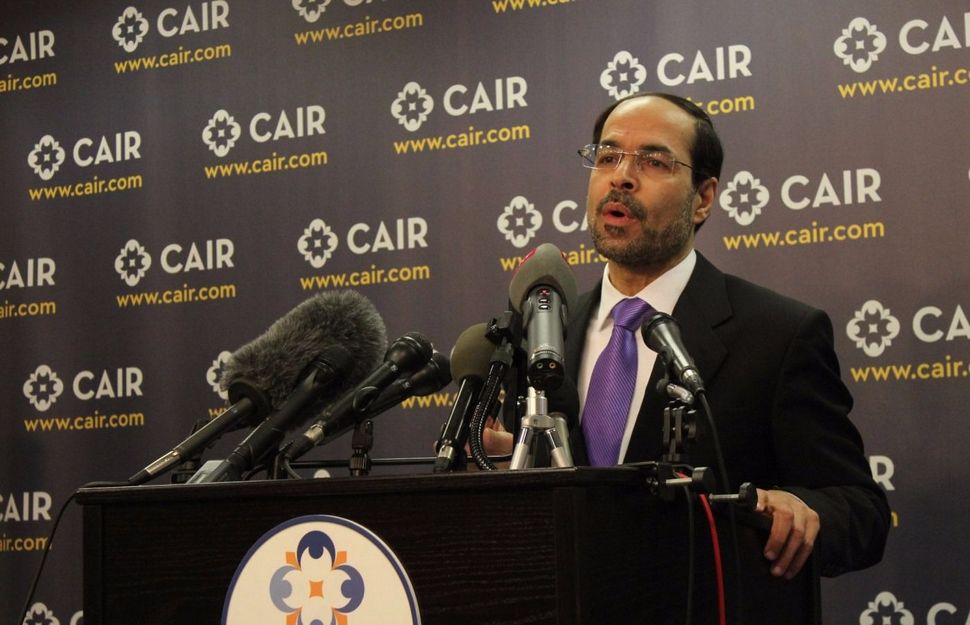 At a press conference just hours after a Muslim gunman murdered 49 people at a gay club in Orlando, Florida, the executive director of the Council on American-Islamic Relations described the separate struggles for equality being waged by gays and Muslims as “profoundly linked.”

“Homophobia, transphobia, and Islamophobia are interconnected systems of oppression and we cannot dismantle one without dismantling the others,” said Nihad Awad, who is also a founder of CAIR, the nation’s largest Muslim advocacy group.

It was a call that went beyond mere condemnation of the attack, and one that bridged a delicate divide between the Muslim advocates’ support for individual rights and their own religion’s strictures on homosexuality.

It could also signal a growing recognition among Americans Muslims that their fight for civil rights may be waged within the context of a broader struggle for tolerance that would include respect for other minority groups, such as LGBT people and Jews.

Contacted by the Forward, Awad said that “the Abrahamic morality” of the Muslim, Jewish and Christian faiths “do not condone a certain lifestyle.” But he said that that he saw “no contradiction” in his group advocating for gays.

“Defending the civil rights of any community doesn’t mean I have to adopt their faith or their thinking or their lifestyle,” Awad told the Forward. “I have to respect it and I have to protect it. The true respect of my faith is to respect other people.”

Muslim and Jewish leaders in Central Florida were quick to join in condemning the attack and preparing to work together to plan joint memorial services.

Awad’s avowals came even as some right-wing critics, warning of Muslim extremism, claimed that the mass murder committed by gunman Omar Mateen, stemmed from principles inherent to Islam itself.

“The mandate that homosexuals be killed is not from ISIS or al-Qaeda. It is from sharia — which draws on Muslim scripture,” wrote former U.S. federal prosecutor Andrew McCarthy, on the website of the conservative journal National Review soon after the attack.

CAIR’s Florida chapter condemned the attack and asked members of the Muslim community to donate blood to aid the victims of the nightclub attack. CAIR’s Oklahoma chapter said that it “stand[s] with members of the LGBTQ community.”

In a twist, multiple media reports said Mateen himself was a regular at gay clubs and used gay social media to meet other men.

Ironically, the Orlando attack came just days hundreds crowded into a Louisville, Kentucky mosque to celebrate the life of boxer Muhammad Ali in an interfaith service. Dr. Muhammad Babar began the service with a poem: “You were the true face of faith,” he read.

Across the country, Muslim Americans were quick to condemn the attack, and some mosques took extra security measures to protect against any backlash, which they aaid could be inspired by Republican presidential candidate Donald Trump’s anti-Muslim rhetoric.

On the presidential campaign trail, presumptive Republican nominee Donald Trump called for a ban on immigration from countries with a “history of terrorism.”

“We’ve got to get smart, and tough, and vigilant, and we’ve got to do it now, because later is too late,” Trump said in a New Hampshire speech on Monday.

In her response to the massacre, the presumptive Democratic nominee, Hillary Clinton, warned against “inflammatory anti-Muslim rhetoric” and said she would make “identifying and stopping ‘lone wolves’ a top priority.”

The Islamic Center of Orlando on Sunday told congregants to avoid praying outside – a practice that is common during Ramadan, when mosques are often over capacity for evening prayers.

Local law enforcement is sending patrols to the neighborhood, and the mosque is hiring extra security at night, according to Fatima Rami, an administrator. The center has called on local congregants to donate blood to victims of the shooting, even if it means breaking their Ramadan fasting for a day.

“A broken fast can be made up, a life lost is gone forever,” it posted on its website.

“Racism and bigotry is the same, whether it’s against one group or another,” Babar said. “We hope our fellow citizens will see us through the lens of Muhammad Ali, rather than this deranged soul, though our hopes are dampened by this senseless tragedy.”

“The issue is not Islam more than any other religion,” said Sinno, whose band happens to be midway through a summer tour of the U.S. “Most of the attacks that happen against the queer community in the U.S. are not by Muslims, they’re by Christian fanatics.”

In front of a sold-out crowd on Monday night at the Hamilton venue in downtown Washington, D.C., the band briefly addressed the tragedy, the worst mass shooting in modern American history. Staff at the Hamilton said they decided to up security measures following Sunday’s attack, and patrons and their bags were carefully screened before entering the concert.

“There are a bunch of us who are queer, who feel assaulted by that attack who can’t mourn because we’re also from Muslim families, and we exist,” Sinno said to cheers from the crowd.—With Reuters