What 5 Key British Jews Are Saying About Brexit Vote 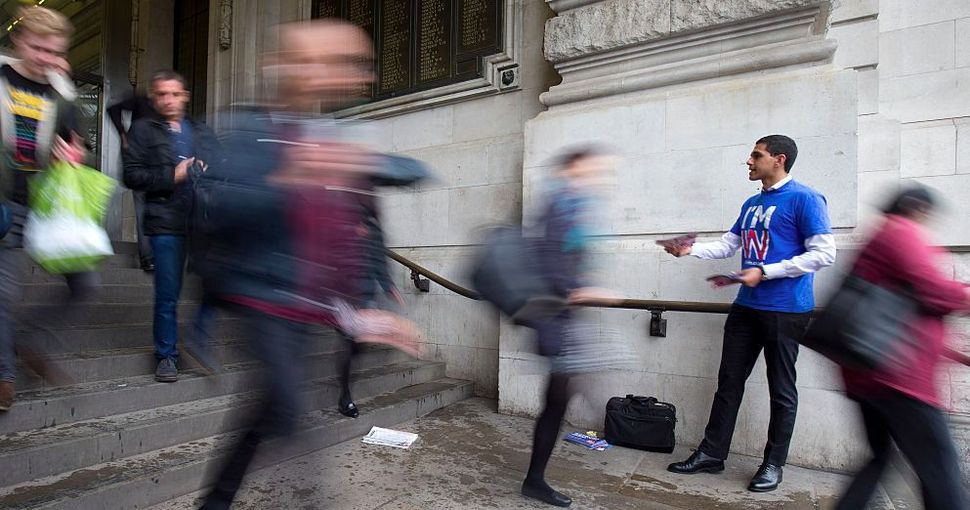 On Thursday, the United Kingdom will hold a referendum on whether or not to remain part of the European Union. Although the UK retains a currency (the pound) separate from the EU, it is a signatory on many other economic and political treaties. Many Britons see the Brexit referendum, as it is known colloquially, as an era-defining issue.

In recent weeks there has been an increase in the number of Jewish voices weighing in on whether to vote “Leave” or “Remain.” A poll from May 16th conducted by the Jewish Chronicle found that 49% of Jews want the UK to remain in the EU, while 34% chose a Brexit. 17%, however, remained undecided. And, following the trend throughout the UK, almost two-thirds of younger Jews would prefer the UK to stay.

As the clock ticks away on the historic, “absolutely insane” Brexit campaign, here are five Jewish leaders, in Britain and Israel, and their take on whether to Leave or Remain.

The former Deputy Speaker of the Knesset (when an MP for Meretz), Chazan has come out in outspoken opposition to the Brexit camp. In a recent blog post Chazan, who is known for her humanitarian work and legislation on women’s rights, outlined four key points for Israeli Jews to consider. Firstly, a Brexit would make doing business in Europe more difficult for Israeli companies, as many are based in the UK and would have to renegotiate trade deals with the EU. Second, that London is one of Israel’s most loyal allies in the EU. Thirdly, a UK-less EU will likely be much less amenable to Israeli demands when it comes to negotiating with the Palestinian Authority. And finally, a vote to Remain is a vote for democracy and pluralism.

On the opposite side of the field is Meir Deutsch, the director of policy and government relations for Regavim, an environmental Israeli NGO with strong ties to the settler movement. His organization recently released a video in which actors dressed as Hamas soldiers encourage Britain to stay in the EU, so that a strong EU can continue to label “Jew products” just like that “angry little German man” and send the terrorist group “aid money.” Deutsch told the Times of Israel, “We think they should be acting in a more balanced way. As long as that is not happening, we want the EU to be damaged.”

Rabbi Janner-Klausner is the head Reform Rabbi of the UK, and Laura Marks is the co-chair of Nasa-Nashim, a British organization that aims to empower Jewish and Muslim women together. They are both signatories, along with thirty-five other religious leaders in the UK, of a letter published in the Observer, that urges Britons to vote Remain. “The past 70 years,” the letter reads, “have been the longest period of peace in Europe’s history.” The problems of today — the refugee crisis, climate change, ending poverty — “can only be addressed in a European, and indeed a global, context.”

Gould, the first Jewish Ambassador from Britain to Israel, has been reportedly heading up a task force within British Prime Minister David Cameron’s administration to address the rising tide of Brexit sentiment. Gould, who was subject to scrutiny controversy in both Britain and Israel throughout post, and from both ends of the political spectrum, has come under serious fire from British news outlets like The Times and The Sun . Gould has not spoken publicly about his role in Cameron’s “I’m In” campaign, although his past of protecting Jewish business interests in Britain is likely informing his support of the PM’s efforts.

What 5 Key British Jews Are Saying About Brexit Vote