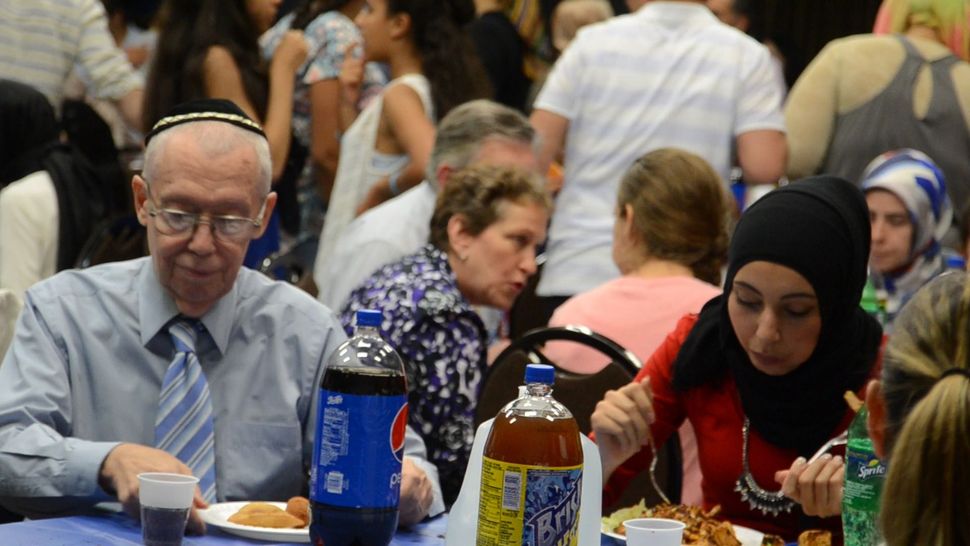 Jewish and Muslim participants eat at an interfaith iftar dinner at the Kings Bay Y. Image by Thea Glassman

The group that gathered inside a South Brooklyn Jewish community center the evening of Monday, June 20, had trouble staying silent. Young children whimpered impatiently, their eyes on the tables of untouched food, and latecomers whispered excuses as they pushed through the crowded room. Only a man in a light-gray skull cap succeeded in capturing everyone’s attention. His voice was melodious and strong as he started to chant “Allahu Akbar.”

Afterward, participants at the Ramadan break-the-fast event ignored the signs designating the tables as kosher and halal, crossing the communal line not only for meat-filled pastries and vegetable stew, but also for conversation.

“When we first came in, the Jewish people were sitting in one section and the Muslims were a little bit in the other section, but now you’re going to find everybody sharing food with one another,” said 21-year-old Egyptian-American Nora Elbassiony, who helped organize the first iftar meal at the community center three years ago after she grew frustrated with negative feelings between Muslims and Jews.

After presidential candidate Donald Trump responded to the Orlando, Florida, massacre by doubling down on his call for a ban on Muslim immigration, many Muslims and Jews began to see an especially urgent need for dialogue, but cooperation between the two groups is relatively new, and challenging.

“It is so critical right now, especially with what’s going on in the election cycle, to show our Muslim brothers and sisters that we approach them as individuals, not as a mythical group,” said Leonard Petlakh, executive director of the Kings Bay Y, where the dinner took place.

In comparison with interfaith efforts with Christians, Jewish dialogue with Muslims is in its infancy. Jewish-Christian reconciliation efforts emerged after the Holocaust, and ties between the two groups are now well established.

Most Muslim immigrants came to the United States starting in the 1960s, and the community focused for decades on community building, said Reuven Firestone, an expert in medieval Judaism and Islam and founder of the Center for Muslim-Jewish Engagement at Hebrew Union College-Jewish Institute of Religion.

Then, after the 9/11 attacks on the World Trade Center and the Pentagon, hatred and fear of Muslims, called “Islamophobia,” emerged in popular culture and media. The community realized the need for outreach, and started holding joint events with other religious groups, and opening mosques for educational programming. 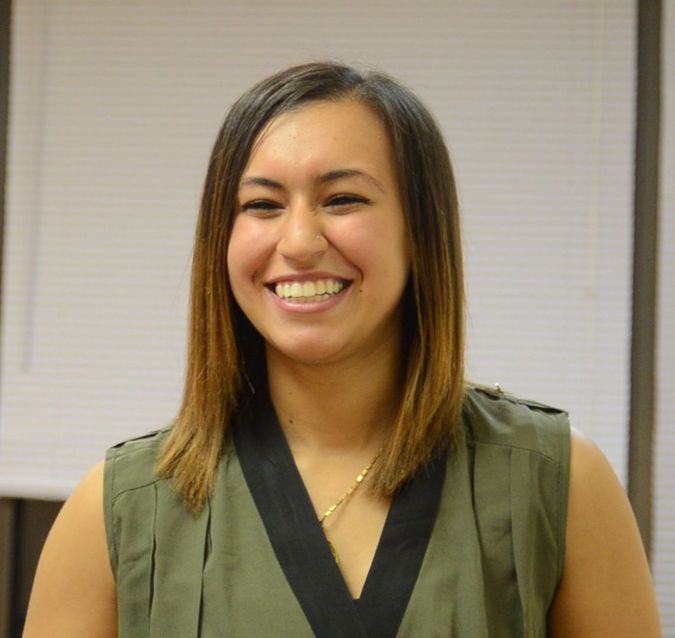 Egyptian-American Nora Elbassiony came up with the idea to host the first Muslim-Jewish iftar dinner at the Kings Bay Y in 2013. Image by Thea Glassman

Elbassiony, who is Muslim, is a young ambassador for interfaith dialogue. Her face lit up when she told of a Palestinian-American friend whom she convinced to attend the dinner.

But the passion of grassroots advocates has not translated into involvement on the national level. Now, as Trump continues to portray Muslims as a threat, the cause gains further relevance for Jews who remember their World War II experience, and the discrimination they faced as new immigrants to the United States.

“At the local level there are some really good ties. What’s missing is a national-level policy dialogue, ” said Robert Silverman, whose recent appointment by the American Jewish Committee to serve as U.S. director of Muslim-Jewish relations, a new position, signals a desire to change that.

To be sure, national organizations, such as the Anti-Defamation League and UJA-Federation of New York, have partnered with Muslim groups, but the fact remains that AJC’s creation of a senior-level position dedicated to Muslim outreach is an exception rather than the rule. 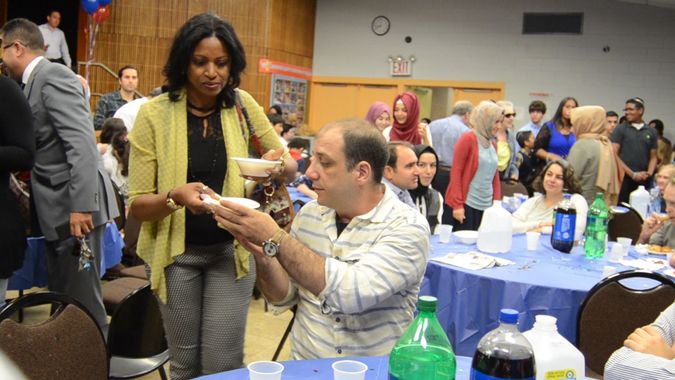 Participants at a Jewish-Muslim iftar dinner at the Kings Bay Y. Image by Thea Glassman

Meanwhile, grassroots advocates continue to see a bottom-up approach as the key to success in their interfaith efforts.

“This is very sensitive work,” said Yehuda Kurtzer, president of the Shalom Hartman Institute of North America, which runs a program that educates Muslim leaders about Judaism. The organization decided not to partner with any national organizations — Jewish or Muslim — for its Muslim leadership program, even though it works with AJC on a similar program for Christian leaders.

“We have a certain type of approach that our Muslim leaders find compelling and honest, and it detaches from the policy agendas of Jewish institutions,” he told the Forward.

But even in grassroots programs, the Middle East lingers in the background.

Ibrahim, like many others interviewed for this article, chose her words carefully. She did not want to say something that could be misinterpreted by either side.

“I see my role as one single individual to simply connect other human beings to one another, Muslims and Jews,” she said. “There are uncomfortable conversations that have to take place, but in my experience those conversations are better had between people who trust and love one another.” 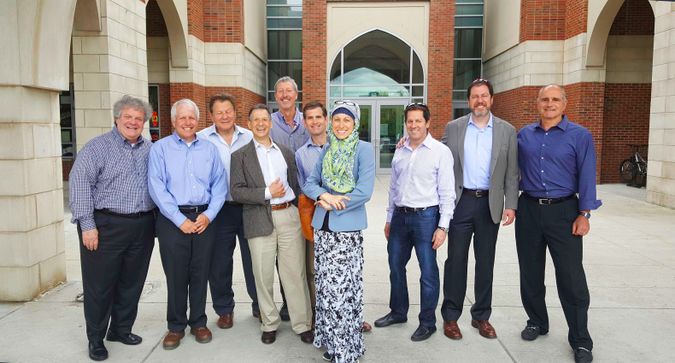 Others never get to the stage of trust and love.

The Council on American-Islamic Relations, the nation’s foremost Muslim advocacy group, has found few Jewish partners willing to collaborate, due to its alleged ties to Hamas and anti-Israel views.

In 2007, the U.S. government named CAIR an “unindicted co-conspirator” with the Holy Land Foundation, in providing aid to Hamas, although a court ruling later found the government’s action had violated CAIR’s Fifth Amendment right to due process. The ADL said the group “has a long record of anti-Israel activity” in a 2015 report.

“The elephant in the room is the issue of Israel and Palestinian rights. This is often used by organized Jewish groups, which impose a kind of litmus test on the Middle East conflict, and we don’t think that’s really productive,” said Ibrahim Hooper, CAIR’s national communications director. While indicating that CAIR is open to working with Jewish groups, Hooper also said it had not reached out to any such organizations recently.

One prominent rabbi recently crossed communal lines to work with CAIR on a social media campaign aimed at combating Islamophobia, in light of Trump “spewing diatribe” against Muslims.

“I believe that individuals and institutions they evolve, they grow. I think CAIR today, its focus is on defending the rights of American Muslims,” said Rabbi Marc Schneier, whose not-for-profit organization, the Foundation for Ethnic Understanding, works to strengthen ties between Jews and Muslims as well as other minority communities, while acknowledging that CAIR had made “controversial statements about Israel in the past.”

Silverman, who started at AJC in May, said he was cautious about working with CAIR but did not completely rule out a collaboration, adding that he would be focusing on working with local Muslim groups to develop a national policy agenda that is “in the interest of both communities.”

Other Jewish leaders are still not prepared to work with CAIR.

“We don’t see CAIR as an organization we are willing to work with,” Oren Segal, director of the ADL’s center on extremism, said last December.

For now, local advocates continue their work, one iftar meal at a time.

“In the Quran, if both of us eat, we share from this plate. Whatever I have from her, she’s going to have from me, so we’re one person,” said Elbassiony’s mother, Nervin Bekhit.

“I come particularly for her cooking,” added Trinidadian Jewish Sarah Miller, as Bekhit broke into laughter. 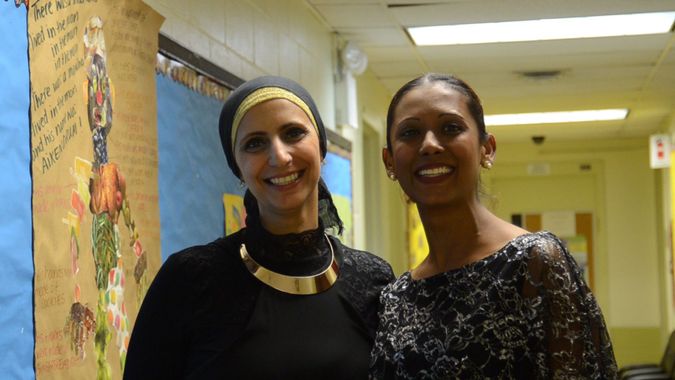 Nervin Bekhit (left), who is Muslim, with her friend Sarah Miller, who is Jewish, attend a Muslim-Jewish iftar dinner at the Kings Bay Y. Image by Thea Glassman