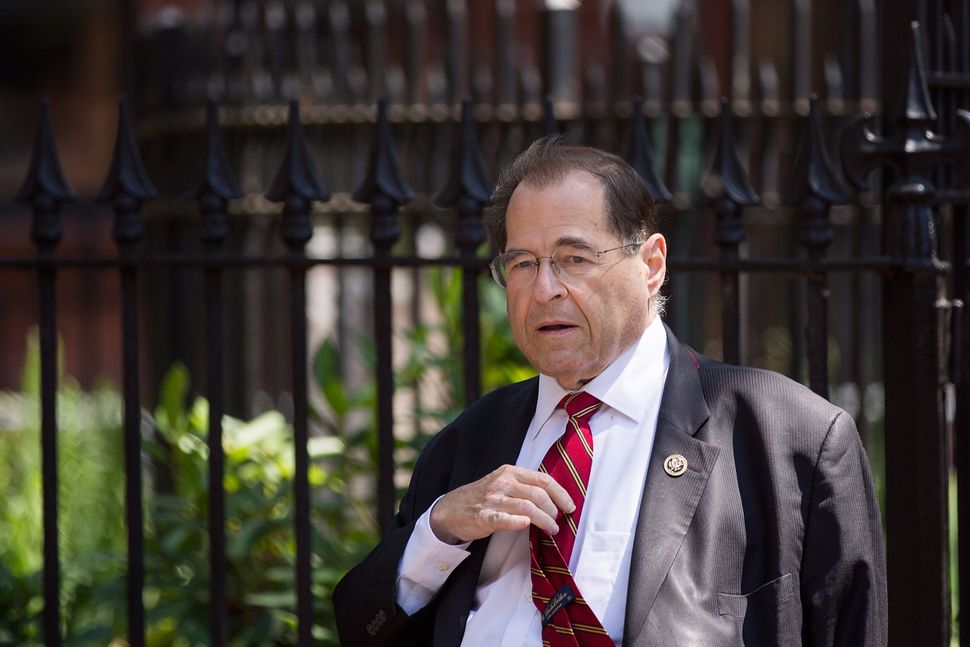 Representative Jerry Nadler beat back a young challenger to win an overwhelming primary victory in the most Jewish district in the entire House of Representatives.

The win in the Democratic primary means that it is all-but-certain that the Upper West Side stalwart will be elected to his thirteenth term in the House of Representatives this November.

But while Nadler received a commanding 90% of the vote district-wide, he stumbled in the smaller portion of his district that lies in Brooklyn. There, he beat his opponent, a 30-year-old political neophyte named Oliver Rosenberg, by a single vote.

Rosenberg’s near-tie in Brooklyn, along with low turnout there, suggest lingering harsh feelings for Nadler among his Orthodox constituents.

Politicians in the ultra-Orthodox Brooklyn neighborhood of Boro Park warned last fall that Nadler would suffer for his vote for the nuclear deal with Iran. Nadler emerged as a key Jewish supporter of the deal, drawing anger from the deal’s opponents. In the end, only Boro Park’s hawkish Democratic New York State Assemblyman Dov Hikind endorsed Rosenberg, but attacks on Nadler’s vote were a constant theme in the campaign.

Nadler dominated the voting booths in the Manhattan portions of his district, winning 93% of the vote in the long stretch from Morningside Heights down to the Financial District. But the Brooklyn portions of the district, which include parts of Boro Park, Midwood, and other neighborhoods, were evenly split: 1,426 voters for Nadler and 1,425 for Rosenberg.

Turnout, meanwhile, was particularly low in the Brooklyn portions of the district, where 4% of active enrolled Democrats voted. In the Manhattan portions, 15% voted.

“The turnout was low in Brooklyn because voters were unhappy with their choices,” said New York City Council member David Greenfield, who represents Boro Park and Midwood, in an email to the Forward. “The bottom line is this: Congressman Nadler is now only a Congressman for the Manhattan portion of his district. He has to decide if he wants to represent Brooklyn, as well. If so, he needs to work to restore the trust that he broke with his Brooklyn constituents.”

Greenfield, who did not endorse either candidate in the primary, attributed Nadler’s performance in Boro Park to his Iran vote. But Yosef Rapaport, a Boro Park resident and media consultant, said that conversations in the neighborhood and in Orthodox social media circles on the day before the election focused not on the Iran vote, but on the congressman’s opposition in 2013 to a bill that would have made synagogues and other houses of worship eligible for federal disaster aid in the wake of Hurricane Sandy.

Rapaport said that the campaign in Boro Park grew intense in the final days, with pro-Rosenberg robocalls from Hikind and a pro-Rosenberg Yiddish-language sound truck circling the neighborhood.

“Both Iran and the Sandy thing really hurt him,” Rapaport said. “And then you have the robocalls by Hikind and robocalls by Rosenberg. It really does pile on, and people get confused.”

Most of Rosenberg’s support in Brooklyn came from voters in Hikind’s Assembly district. Of the 1,200 votes registered there, three quarters went for Rosenberg. A spokesman for Hikind said that the Assemblyman would not comment on the election results.

“The election was definitely about more than just the Iran vote, and while there are definite areas where that was a central issue, I think the overall the win in Brooklyn and the win all over the district shows that there’s really overwhelming support for Congressman Nadler,” said Schwarz.