Leaving the Straight and Narrow ‘Derech’ 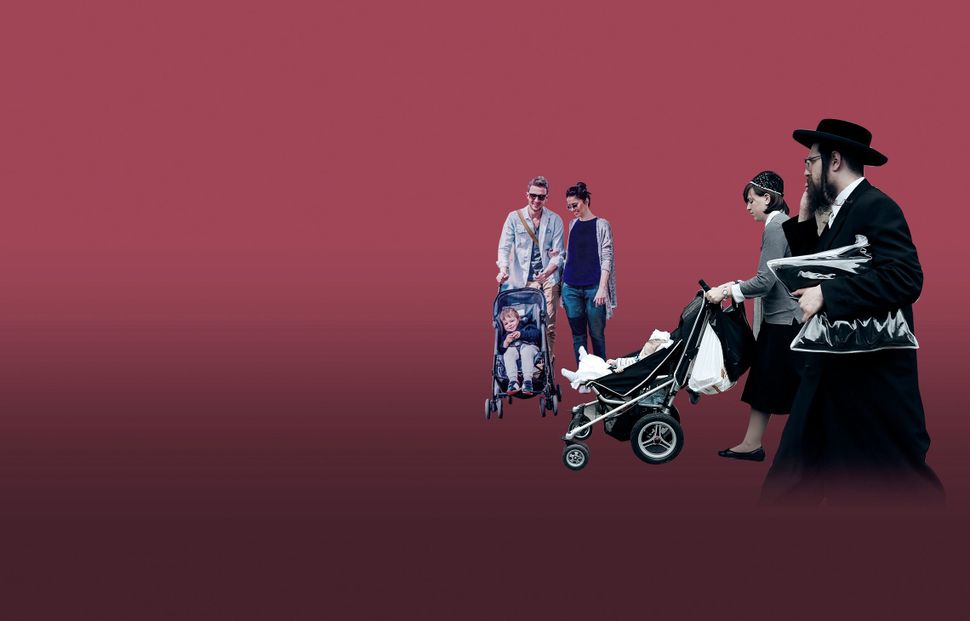 ‘Binyamin” is a formerly ultra-Orthodox Jew from Lakewood, New Jersey. He was raised in a household with over a dozen siblings, and stopped receiving secular education after sixth grade. Binyamin’s parents, he said, were emotionally abusive to him and his siblings. There wasn’t a time when things were better, he remembers. It was always that way.

“The generic answer for God and suffering is that He has a greater plan,” Binyamin said. But when Binyamin prayed to God to understand what that plan may be, “the silence was deafening.”

His faith in God deteriorated, leaving disappointment in its place. He’s still in search of a place to pray. He wants the intellectual rigor of the “Yeshivish” community where he was raised, in which young men spend most of their day studying the Talmud. He doesn’t want the pretense and customs of ultra-Orthodoxy.

“I talk about Hashem [God] all the time,” he said. “I’m very angry at Him for not existing.”

Binyamin is part of a segment of Jews that were at one point observant — living and practicing in various Orthodox communities — but no longer identify as such. They refer to themselves in many ways. Off the derech (a derech is a path or trail), OTD for short. Formerly Orthodox, or ex-Orthodox, ex-O for short. Post-denominational. Or simply as Jews. (Read Binyamin’s whole story here.)

Each of them has come from a community in which the modes of observance and social conduct are strict and proscribed, in which the learning of Torah is, to varying degrees, the preferred source of learning, and where they each felt shortchanged — either spiritually, ethically, intellectually or all of the above. 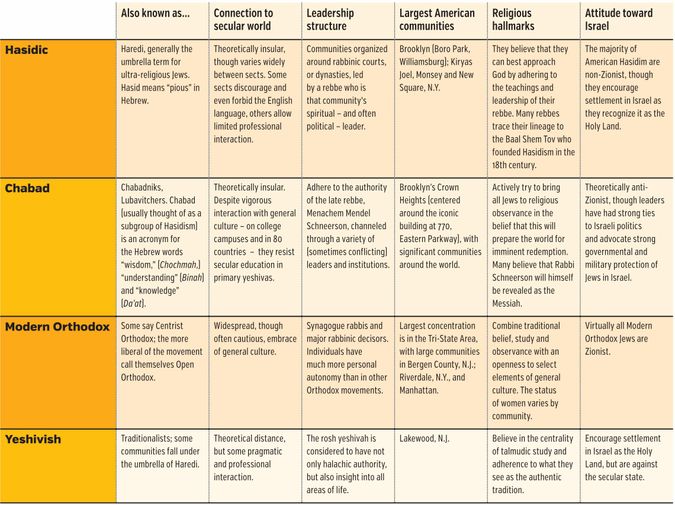 The group’s profile has risen in the past five years, due to a spate of films and memoirs by ex-Orthodox Jews. Now a research firm has released what is probably the first formal study of the community. Nishma, a marketing agency that specializes in the Jewish community, solicited information from about 900 formerly Orthodox Jews living in 11 countries and 31 states. (Twenty-seven percent of all respondents live in Brooklyn.)

“This is the first survey that captured the experience of a very diverse group of people whose experience is often oversimplified or misunderstood,” said Tsivia Finman, who directs operations and planning at Footsteps, an organization that provides social services to those wishing to leave their ultra-Orthodox community.

The survey asked its respondents to identify themselves as a member of predefined categories: Yeshivish, Hasidic, Modern Orthodox, Chabad or other. The Hasidic community, like the Yeshivish, is an insular and highly observant group; outsiders can often identify them by customs of dress, such as round fur hats and side curls for the men and wigs for the women. The HasidIm, however, are organized around dynasties of rabbinical leaders.

The survey asked questions about what changed their beliefs and practices; if and how friends, family and Jewish organizations supported them, and how they have reconstituted their Jewish identities. Nishma funded the survey itself.

“It’s to do two things,” said Mark Trencher, founder and executive director of Nishma. “It’s for the benefit of the wider Jewish community, so that we’ll know more about it, and also to create connections within Judaism, across different Jewish communities.”

Several organizations and Facebook groups that either serve the “OTD” community directly or have a significant number of formerly Orthodox members distributed links to the survey, which means that many of its respondents came to the questionnaire with a similar set of biases. Footsteps’ leadership was heavily involved in crafting the survey, even at the level of how to phrase the questions.

Unlike the Pew Research Center’s widely discussed 2013 report “A Portrait of Jewish Americans,” Nishma’s study, released June 21, was not based on a random sample of the population. It was what’s called an “opt-in” survey, in which respondents can volunteer to take part. (Unlike in some opt-in surveys, Nishma’s respondents were not compensated for their participation.)

Relative to Pew’s report, the Nishma study has limited applicability in making claims about the entire formerly Orthodox population, or the Jewish population at large. But it does paint — albeit with broad strokes — a portrait of a community that is growing in visibility. In recent years, formerly Orthodox Jews have released several memoirs, among them “All Who Go Do Not Return” by Shulem Deen, “Unorthodox” by Deborah Feldman, “Cut Me Loose” by Leah Vincent and Shalom Auslander’s “Foreskin’s Lament.”

Agudath Israel of America, an umbrella organization of ultra-Orthodox communities, ended its national convention last November with a discussion of OTD Jews. Avi Shafran, the group’s director of public affairs, moderated the discussion. The mood, he said, was somber.

“All the speakers basically blamed the audience,” he said. “We asked what we could do about it not because we are embarrassed, but because these are Jews that we care about.”

“It’s a source of pain for us — we think of our lives as idyllic,” he added. “We are always asking ourselves, ‘What can we do to have others feel the same things we feel?’”

The central finding of the study is that many formerly Orthodox Jews, much like “Binyamin,” feel “pushed” off the derech by “internal conditions,” such as the place of women in the Orthodox world, perceived double standards, and contradictions in practice and belief. Many respondents also cited personal curiosity about the outside world.

Yet nearly all (95%) identify as Jewish, even if 60% did not identify with a specific denomination, and instead prefer to call themselves cultural, humanist or secular Jews.

“It’s great to have quantitative data on things that we organizationally have known qualitatively for some time,” said Lani Santo, executive director of Footsteps.

More than a third of Modern Orthodox women cited the status of women as a reason to leave. Women were generally more likely than men to give reasons for leaving that related to social conditions within the community, such as tendencies to judge, exclude and gossip about people.

Santo, who grew up Modern Orthodox, said she was not surprised that complaints over the status of women were highest among those from Modern Orthodox communities, which maintain traditionally observant practices but whose members are relatively more integrated with the broader culture due to secular schooling or employment.

“To be closer to the secular world and not have that introduced” into your own community, she said, can be very disillusioning.

A third of all respondents said they had left their communities spiritually and in religious practice, but have not physically left, and continue to show outward displays of observance. Of these “double-lifers,” as the survey dubs them, 39% say they will soon leave.

Finman comes from a Chabad community in Detroit. Chabad is a subset of Hasidism that actively works to bring other Jews closer to observance in order to prepare the world for the coming of the Messiah.

Her decision to leave Chabad, she said, had less to do with its internal strictures than with her search for a spirituality of her own:. “I had a very positive experience in my upbringing, but the community norms were too narrow for the lifestyle I wanted to live.

“New York City has a complete menu of Jewish options, and for me more is better.” 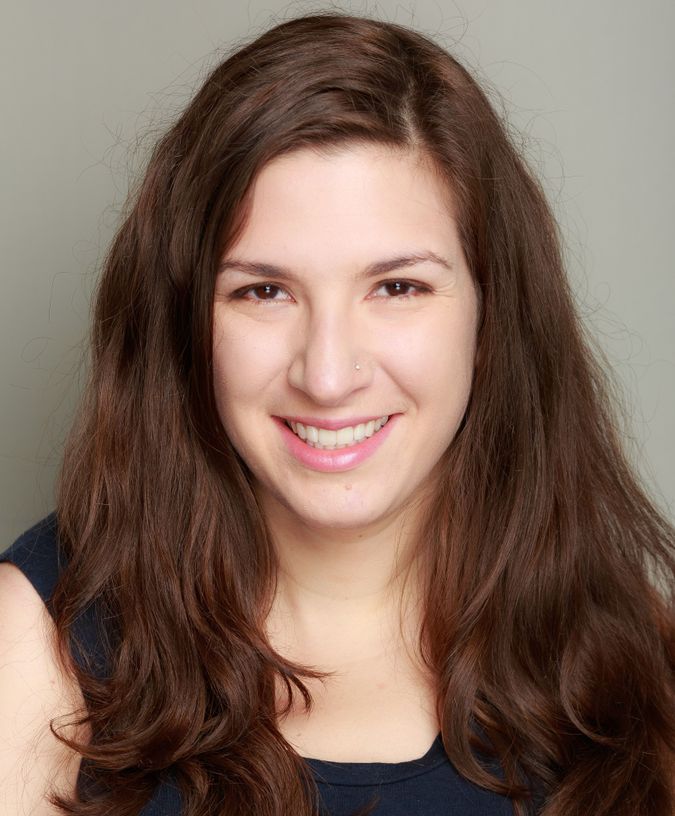 Many social media groups, as well as groups like OTD Meetup, are dedicated to programming nonreligious social events for formerly Orthodox Jews.

“The secular world doesn’t do community well; the religious world does,” said Shulem Deen, who was raised in an insular Hasidic community in Brooklyn’s Boro Park and eventually lost custody of his five children after his acrimonious exit from his adopted community of Skver Hasidim. Deen’s memoir, “All Who Go Do Not Return,” won a 2015 National Jewish Book Award. “For those to whom community has always been so central, to leave and go into a world where community is so hard to find can be very isolating,” Deen said.

The Nishma study found that some of the OTD community’s biggest problems are around socializing after leaving their communities. Nearly half (43%) said they had trouble socializing, and 54% said that something is missing from their interactions with new communities. Organizations like OTD Meetup help formerly Orthodox Jews expand their idea of what a community can be.

Tsivia Finman as a little girl with her mother and father.

Then again, the designation of OTD for “off the derech” is subject to controversy among formerly Orthodox Jews. The derech is a commonly referred to metaphorical path within Orthodox communities that describes generally the observance of Halacha, or the canon of Jewish law. One who goes off the derech in these communities is one who is seen as breaking Jewish law.

Deen doesn’t use it in his writing, because he feels it defines the community by what it is not rather than by what it is. Others embrace the term as a snappy shorthand.

“The more agility any community has around celebrating diversity, the better,” Finman said. She does, however, understand why others are wary of the phrase, as it suggests a normative view of Jewish observance.

“That is disagreement I want to celebrate,” she said.

Twenty-one percent of respondents to the Nishma study said they still believe in God. (The Pew study found that 89% of Orthodox Jews believe in God “with absolute certainty,” compared with 34% of Jews overall.) Despite this, and despite many feeling unattached to any particular Jewish community, 61% of respondents said they felt a strong sense of belonging to the Jewish people.

“I probably more strongly identify as Jewish now than ever before,” said Shamira Gelbman, a professor of political science at Wabash College, in Indiana who was raised Yeshivish, like Binyamin. “I’ve embraced a cultural and intellectual Jewish identity.” 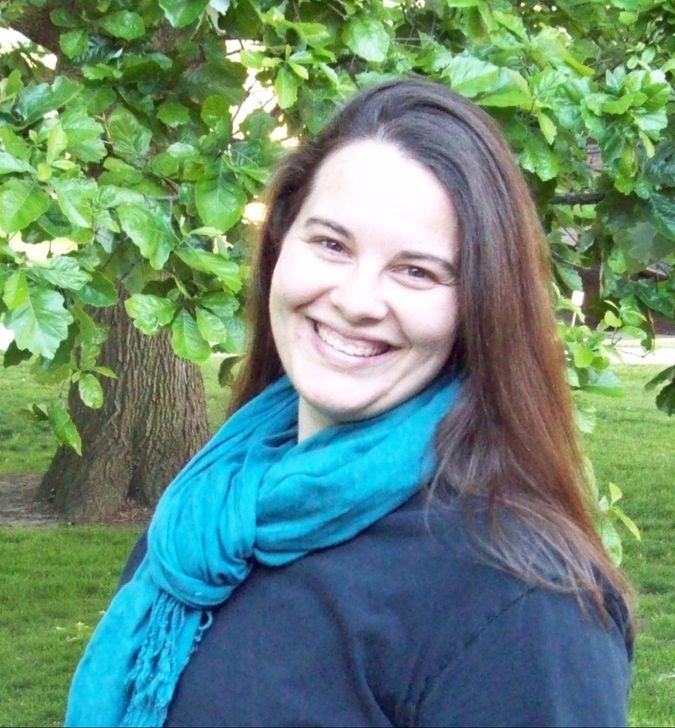 “As a kid I didn’t think about it very much,” she said. “It was inertia. I thought, this is the life I lead because this is the family I live in. And now it’s a deliberate identity, one I feel more strongly connected to.”

Binyamin, still unclear on his own identity, is continuously seeking out new communities that may be able to accommodate his atheism along with his talmudic pedigree. He anticipates that he and his wife, who remains religious, will eventually end up in a more liberal Modern Orthodox community.

“They seem to allow for the whole ‘Do what works’ thing,” he said.

Leaving the Straight and Narrow ‘Derech’