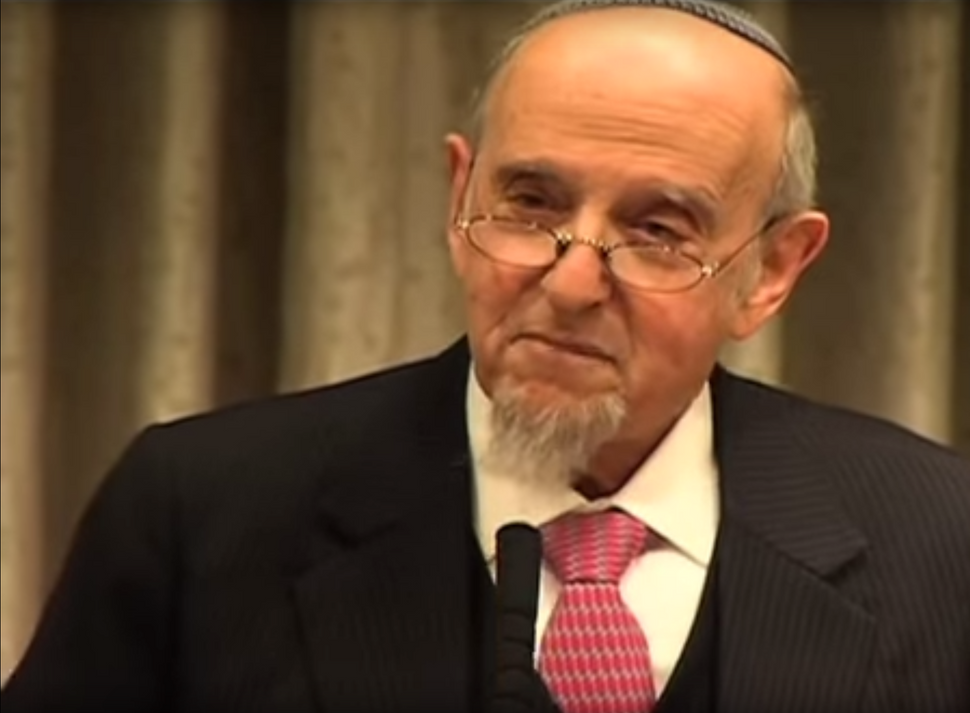 Bowing to mounting pressure from Modern Orthodox circles, Rabbi Haskel Lookstein decided not to give his planned invocation at the Republican national convention in Cleveland next week.

“The whole matter turned from rabbinic to political, something which was never intended,” Lookstein wrote Friday afternoon in a letter he addressed to the “Ramaz Family,” referring to the Ramaz Orthodox day school which he had headed in the past and whose former students signed a petition calling on Lookstein not to legitimize Donald Trump by speaking at the convention.

“Like my father before me, I have never been involved in politics. Politics divides people. My life has been devoted to uniting a community,” he wrote.

Lookstein explained in his letter that he was invited to deliver the opening prayer at the convention next Monday by Ivanka Trump, who he had converted to Judaism and who is a member of his congregation at Kehilath Jershurun synagogue. “I made a personal decision to honor her request out of respect for her and our relationship,” Lookstein wrote. After realizing the controversy his move created, Lookstein reached out to the Trump campaign and asked to be relieved from giving the invocation, “in the interest of bringing our community together.”

The move came after an outpour of anger among Lookstein’s former students at Ramaz, current congregants from Kehilath Jeshurun, and other Modern Orthodox who do not support Donald Trump.

Calling it “a shanda beyond the pale,” a group of Modern Orthodox Jews began collecting signatures on a petition opposing Lookstein’s intention to speak at the Republican convention. “Shanda” is a Yiddish word that means an action or incident that shames the Jewish people.

“Rabbi Lookstein, do you also shrug in the face of virulent, violent anti-Semitism? Do you also believe that ten million Mexicans should be deported? Do you really want your grandchildren to grow up in a racist fantasia in which we will somehow construct ‘the wall’”? ask authors of the petition that as of Friday morning had more than 600 signatories. They went on to warn that Lookstein’s reputation as a major leader of Modern Orthodoxy, who is known for his work as principal of Ramaz school and rabbi emeritus of Kehilath Jeshurun synagogue on the Upper East Side, “will be flushed down the toilet for ten minutes on stage in Cleveland.”

Republicans tapped Lookstein, who sponsored the conversion of Trump’s daughter Ivanka to Judaism, on July 14 to speak at the convention. He’s part of a roster that includes Trump’s family members, several celebrities and a few politicians. Among the speakers is also evangelical pastor Mark Burns who had called in the past for Jewish candidate Bernie Sanders to “meet Jesus.” Trump has struggled to attract broad Jewish support; conservative Jewish commentators have said that he is damaging the Republican Jewish Coalition’s effort to convert Jews, historically loyal Democrats, to their side.

The petition, organized by former Ramaz students, called on Lookstein to reconsider his “public support of this dangerous man,” adding that “the future of our country, not to mention your own legacy, is at stake.”

In addition, another group of students wrote a separate letter to the rabbi, and a Twitter hashtag #RethinkLookstein began circulating on social media.

Lookstein’s conversions were recently rejected by Israel’s chief rabbinate, a move that was denounced by both Israeli and American modern Orthodox leaders.

“I deeply admire Rabbi Lookstein. Had I been in Israel last week I would have been among the first at the rally in support of Rabbi Lookstein’s conversions,” said Fran Kritz of Silver Spring, Maryland, a former Ramaz student who signed the petition, “but I feel just as strongly that it would be dangerous for the U.S. and the world for Donald Trump to be the president of the United Stated and that is why I signed the petition.”

Lookstein did not respond to the Forward’s request for comment.