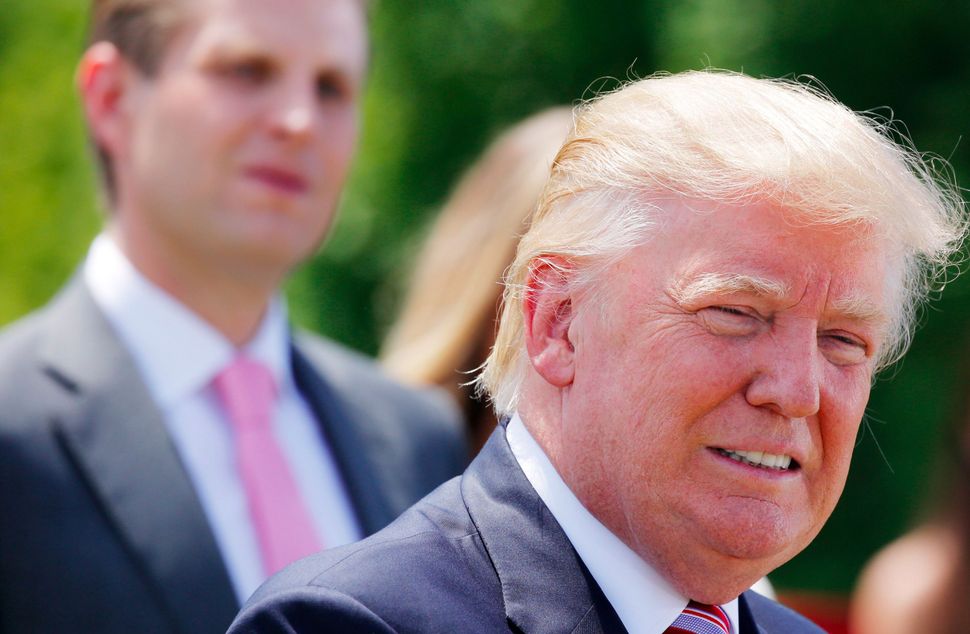 Ask any delegate at the Republican convention in Cleveland and they’ll tell you it’s a new party now. The Trump revolution has swept through the ranks, raising new political elites and shattering the old power structure.

And in this new party, Orthodox Jewish Republicans are now taking the lead, filling the ranks of major donor lists and serving as the Republican support base within the Jewish community.

“From what I am seeing, most of Trump’s big Jewish donors will be Orthodox,” said Nick Muzin, an Orthodox Republican activist who spoke while walking through the convention floor Wednesday morning. The Republican rightward lean on Israel, he added, “is where the party is going and that’s where the Jewish donor base is going.”

Trump’s closest advisers on Israel all don a kippa; his Shabbat observant son-in-law has just been crowned by Politico as the candidate’s most powerful adviser; and in his top donor list, Orthodox heavyweights of the likes of New Jersey’s Rich Roberts are now among the most sought after contributors. The few Jewish Republicans slated to speak at the GOP convention were mostly Orthodox as well.

Roberts was recently named as one of three members on Trump’s Israel advisory committee alongside the candidate’s two close friends serving in the unofficial role of adviser on Israel issues, Jason Greenblatt and David Friedman. Both are Orthodox, too.

Roberts, who is known in his hometown of Lakewood, New Jersey, by his Hebrew name Kasriel, emerged in recent years as a top destination for Republican candidates seeking financial backing. A pharmaceutical entrepreneur who grew up in the yeshiva world, Roberts was not an early Trump supporter. He had preferred Scott Walker or Ted Cruz and gave money also to Marco Rubio. Richards was even in close contact with Rand Paul in the early stages of the race.

In recent presidential and mid-term election cycles, Roberts and his family gave $2.7 million to Republican candidates. In 2012 he was already considered an important donor to presidential candidate Mitt Romney. Federal filings are yet to show any donations from Roberts to the Trump campaign or to Super PACs supporting the candidate, but Roberts made clear in response to a New York Times inquiry in May that he intends to donate to Trump.

The Trump campaign, according to a Jewish Republican source who asked not to be named, is now trying to win over several other Orthodox donors who had backed Cruz and Rubio during the primaries. Key to them are Edward and Elise Czuker of Beverly Hills, who attended the convention as Cruz delegates from California. Jared Kushner, Trump’s Orthodox son-in-law, has taken on, according to press reports, the task of communicating directly with Jewish donors and of working to get them on board despite their early reluctance to back Trump.

The emergence of Orthodox donors as power players is even more apparent against the backdrop of what’s happened to the old guard Jewish donors who had been pivotal for GOP candidates in the past. They’ve largely disappeared. Republican Jewish Coalition board members, the who’s who list of Jewish donors, are mostly sitting out this presidential race, with some even taking an active stand against Trump.

Much still hinges on one single Jewish donor: Sheldon Adelson. According to another Jewish Republican, the casino mogul has been the most sought after contributor at the Cleveland convention. Adelson, who arrived Tuesday and has participated in closed door RJC and RNC meetings, including one where Israeli ambassador Ron Dermer and former House Speaker Newt Gingrich spoke about foreign policy, is still expected to live up to his $100 million pledge to Trump, which was given several months ago.

After waiting out the primaries, Adelson made his decision to back Trump based on conversations he held with the candidate about his policy on Israel. According to people close to Adelson, those conversations satisfied the Las Vegas billionaire’s concerns regarding Trump’s earlier statements that could imply he would be neutral on the preferred resolution of the Israeli-Palestinian conflict.

Since then, Trump has taken steps to reassure hawkish supporters of Israel. He appointed Greenblatt and Friedman, both holding views close to those of Israeli Prime Minister Benjamin Netanyahu, as his advisers. Trump has clarified his position on Jerusalem, stressing the need to move the U.S. embassy to Israel’s capital and to keep Jerusalem undivided under Israeli rule. He also backed the major shift in the party’s platform, which, essentially, rejected the two-state solution as the preferred avenue for solving the Israeli-Palestinian conflict.

This platform shift was the brainchild of Orthodox Republican activists and did not comes from the ranks of RJC members. The American Israel Public Affairs Committee, the most powerful pro-Israel lobby, opposed the move, though at a Wednesday meeting of AIPAC board members attending the Cleveland convention, most viewed the move as a done deal and did not see it as having long-term implications, according to one participant.

One promise to Adelson, however, has not been fulfilled yet. Despite comments made by his advisers in closed door meetings, Trump did not take a pre-election trip to Israel. While he may still find time in his schedule for an overseas visit before November, a person close to the candidate said that so far there were no such plans in the works.

The growing clout of Orthodox Jews in Republican politics could play out in domestic policies as well. In the past, Jewish donors were considered to be a key element of the party’s moderate base, pushing back against attempts to move the GOP to the right on issues relating to family, abortion and gay rights. But Orthodox supporters, in general, tend to support a more conservative line.

And as they become more prominent in the Republican political scene, the party and its institutions are also showing a more hospitable approach, from honoring an Orthodox rabbi with the opening invocation of the convention, to providing kosher food at party events and taking special care of Shabbat observing members attending RJC events.