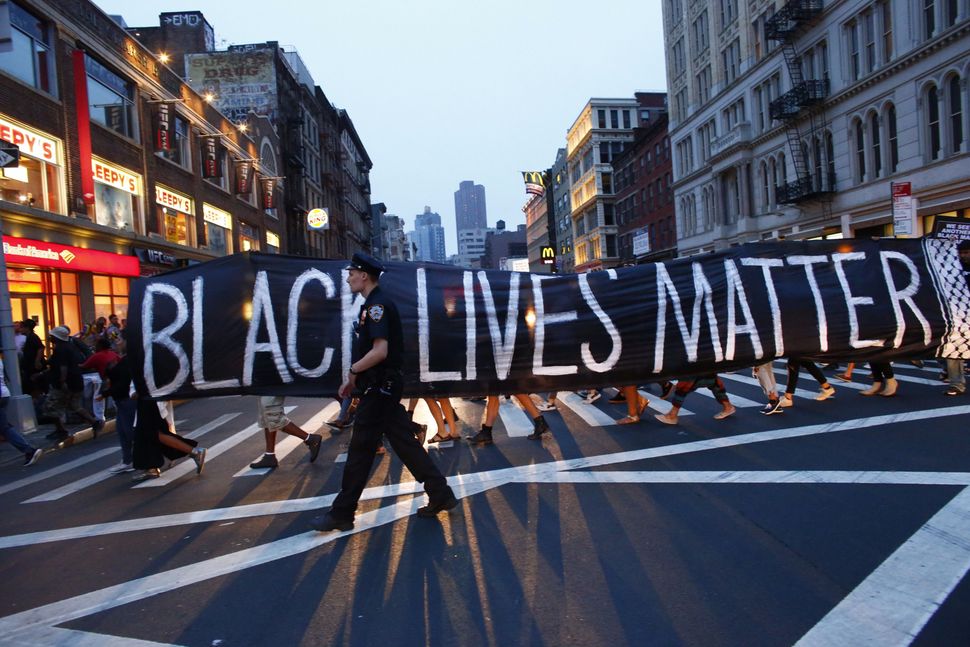 Left-wing Jewish groups and individuals are embracing Black Lives Matter in response to a new platform associated with the Black Lives Matter movement that calls for divestment from Israel — and also describes the country as an “apartheid state” committing “genocide” against the Palestinian people.

Jewish Voice for Peace said the group “endorses the Movement for Black Lives platform in its entirety, without reservation.”

JVP endorses the #Vision4BlackLives platform in its entirety, without reservation:https://t.co/r6neoUxMGA

IfNotNow, a relatively young group whose founders have roots in J Street U, supported the platform and called Black Lives Matter “one of the most powerful movements of our time.”

“We recognize the explicit links between Black, Palestinian, and Jewish liberation,” the group said in a statement.

Rabbi Brant Rosen, who writes the blog “Shalom Rav” and has been an outspoken critic of Israeli policy, called the new platform, “a powerful, comprehensive policy statement.”

“The claim that Israel is committing ‘genocide’ against the Palestinians undeniably pushes all kinds of buttons for many Jews,” he wrote on his blog. “But there are also Jews and Israelis who feel it is not an inappropriate word to use, particularly in regard to Israel’s regular military assaults against Gaza.”

“[The platform] is a challenge for the entire progressive Jewish community at large,” Rosen wrote. “If we claim to ascribe to a power analysis that views systems of oppression as intersectional and interrelated, we simply constantly cannot make an exception when it comes to Israel. The black community is increasingly finding common cause with Palestinians — and for good reason.”

Jewish groups across the country have struggled to strike the right tone in their responses to the Black Lives Matter, as the grassroots movement has gained speed.

The fact that Black Lives Matter is a very amorphous movement has added to the difficulty. Black Lives Matter began as a hashtag, a shorthand used for easy online searches; there are dozens, maybe even hundreds, of groups that have been associated with the name — and they may disagree with one another. Commentators, like CNN’s John Black, have noted this wide diversity and the resultant “confusion over what BLM wants.”

This platform, which is signed by 50 black-led organizations known collectively as the Movement for Black Lives, is at least in part an effort to organize and clarify goals.

Most of the lengthy platform has nothing to do with Israel and is largely a call to “end the war on black people” in America.

Notably, the platform also calls for anti-discrimination laws to to be expanded to include protections for trans, queer, and gender-nonconforming individuals. There is also a proposal to set up black economic cooperatives and free education for black people.

It prompted critical responses from other Jewish organizations as well, including the Anti-Defamation League, which said it was “repellent and completely inaccurate to label Israel’s policy as ‘genocide.’”

In recent months, Jews of color, particularly African American Jews, have taken center stage when addressing racial justice at both JVP and Jews for Racial and Economic Justice, as noted in JVP’s brief statement on the platform.

“Because the leadership team of JVP is currently all white Ashkenazi Jews, we are slowing down to ensure our members who are Jews of Color can lead the way, particularly in matters of racial justice,” the group’s August 4 statement read. “This is part of our ongoing project to dismantle white supremacy inside of JVP.”

The Jews of Color Caucus, which is associated with JFREJ and is now staging weekly Black Lives Matter-aligned protests, had not released any statement as of August 5, a representative from the caucus said.

Shais Rishon, an African American Jew who writes for Tablet Magazine under the name MaNishtana, expressed disappointment with the critical Jewish responses to the Black Lives Matter platform.

“I wish my Jewish community would join the Black Lives Matters movement,” Rishon wrote on his public Facebook page.

Rishon then recalled his own experiences of marginalization and exclusion in Jewish spaces.

“In addition to being African American, I proudly declare myself a Jew, an Orthodox one at that,” Rishon wrote, “despite the fact that New York rabbi Morris J. Raphall soundly endorsed slavery’s legitimacy during the peak of the secession crisis.”

“If I am capable of showing up for and on the side of Judaism — and am expected to, no less — despite centuries worth of egregious wrongs espoused and the support of genocidal institutions against my racial personhood,” Rishon wrote, “then the Jewish community can likewise show support and be present for BLM.”