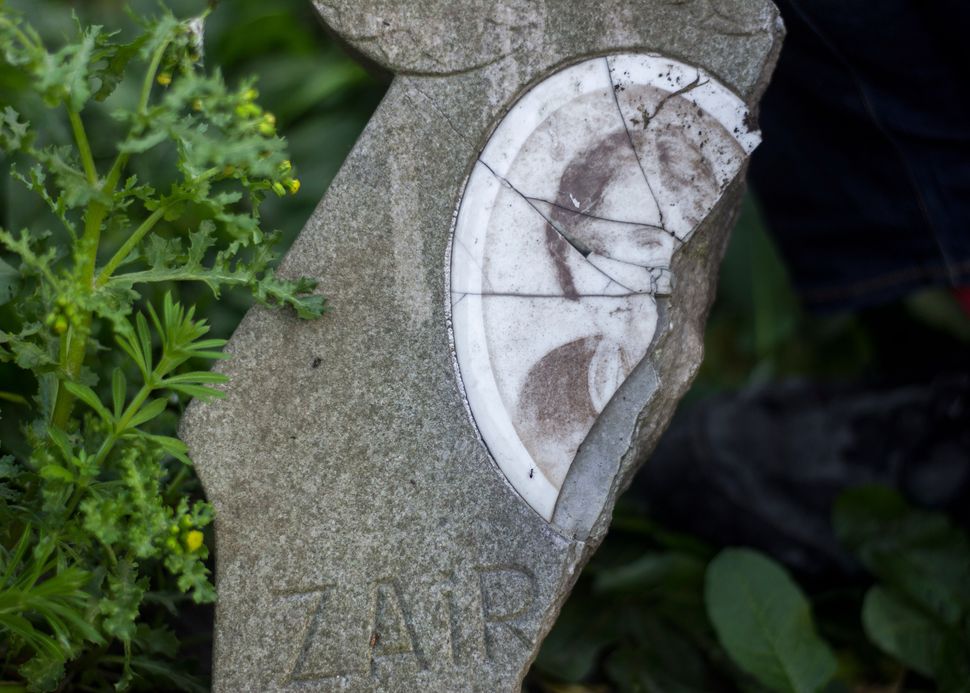 A squad of about half a dozen cats patrols a small, overgrown cemetery in central Istanbul.

“It’s a kind of magical place, right under our noses,” says Memo Kösemen, a local artist and graveyard habitué, surveying the small plot of land.

But something’s caught his eye and suddenly he’s crestfallen. He bends down and hoists a freshly smashed tombstone, trying to fit the pieces back together. An older woman’s face, split in half and incised with a spider web of cracks, gapes up at him. This is one of the special ones, Kösemen quickly realizes; one of them, the Dönme.

The shattered tombstone seems sadly symbolic of a small, secretive society founded during the Ottoman Empire but cruelly stigmatized with bombastic conspiracy theories and forced to assimilate into the subsequent Turkish republic or conceal their true identities.

Today, the Islamist-rooted Justice and Development Party, known as the AKP under its Turkish acronym, do not just control of the government; after defeating the recent attempted military coup, its leaders are feeling empowered. Their push to bring Sunni Islam ever closer into public life in Turkey has intensified, making many religious minorities, including descendants of the Dönme, feel ostracized.

As one of the few Dönme members still living in Turkey put it, “They’re trying to force everyone to become a type of Sunni Muslim.”

In 1665 the Jewish prophet Nathan of Gaza proclaimed the arrival of a Messiah who would lead the Ten Lost Tribes of Israel back to the Holy Land “riding on a lion with a seven-headed dragon in his jaws.” The anointed man was a 39-year-old Sephardic Jewish Kabbalist from Ottoman Izmir, Sabbatai Zevi. 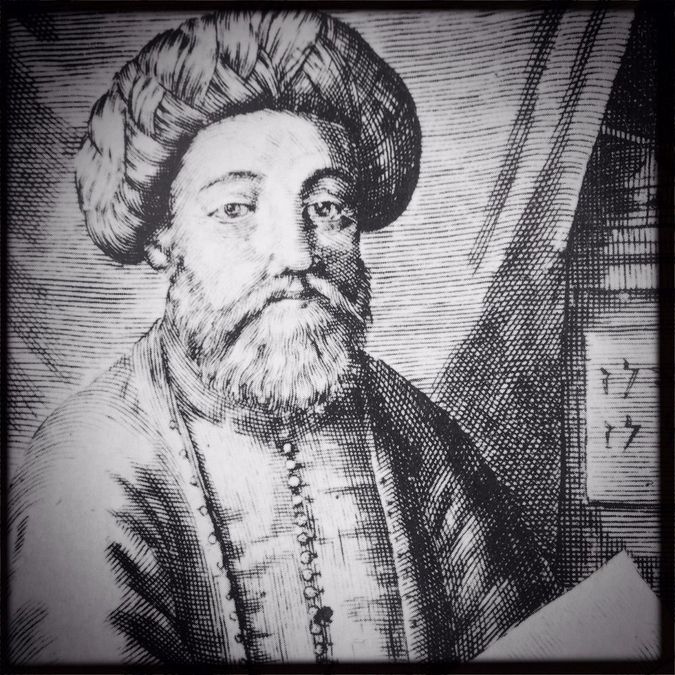 A contemporary portrait of Sabbatai Zevi.

Within a year Zevi was the adored object of one of the largest messianic movements in history, with followers across the Ottoman Empire and Europe. But in 1666 he was imprisoned and accused of sedition by Ottoman authorities wary of his growing influence. Even then, his legions of adherents only seemed to grow. After several months in prison Zevi was brought before the Sultan in Edirne and forced to choose between death and conversion to Islam.

To the horror of his acolytes, he converted and, in return, received honors and a generous stipend from the Sultan. Most of Zevi’s followers abandoned him, but about 300 families, believing his actions to be divinely ordained, converted with him. Moreover, after his conversion Zevi retained and preached many of his old beliefs, and a new Kabbalist culture, slightly influenced by Sufism was born that eventually split into three distinct sects

“They developed a very unique philosophy that separated them from regular Jewish mysticism and Sufism,” says Cengiz Şişman, a history professor at the University of Houston-CL and author of The Burden of Silence, a book about the Dönme.

“For them, the Messiah has already come. He gave them the glad tidings, the good news, told them that for the time being you have to work hard to prepare yourself for the messianic age, and then I’ll come back again.”

In Hebrew the community called themselves Ma’aminim – Believers. But in Turkish they became known as the Dönme, a word roughly meaning convert, but which can have a more negative connotation closer to turncoat. 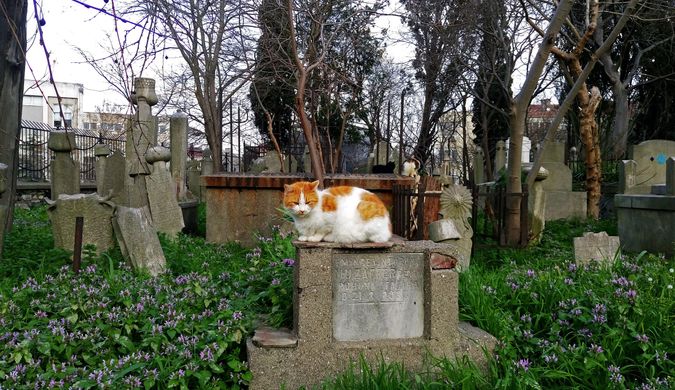 A Dönme cemetery in Istanbul. Image by Nick Ashdown

Zevi’s followers thrived in the Muslim Ottoman Empire where, unlike Spain during the Inquisition, authorities didn’t pry into the private religious lives of those they ruled. This was especially true in what became the Dönme heartland, Salonika, in what was then Ottoman-ruled Greece. There, the Dönme’s numbers reached about 15,000 by the early 20th century.

They were an endogamous society, meaning they only married within their own community. The Dönme established their own neighborhoods, schools, courts, cemeteries and houses of worship. Many became very wealthy and well-educated, pioneering the newest innovations in many fields, such as education, architecture, urban reform and commerce.

But with the establishment of the Turkish republic in 1923, the Dönme were counted as Muslims and included in a forced population exchange between Greece and Turkey. They were brought to Istanbul and lost almost all their wealth. Moreover, despite the avowed secularism of the young, fervently nationalistic republic, the Dönme didn’t fit into the state’s continued upholding of a religious component to Turkish identity. Turkishness was officially defined along lines of racial purity and Sunni Islam. Those outside this dual construct were often looked upon with hostility and suspicion, and seen as potentially disloyal.

Mustafa Kemal Ataturk, founder of the modern Turkish Republic, established a hyper-nationalist, Muslim-linked version of Turkish identity in which the Dönme were pressured to assimilate.

“Banished from Greece because they were Muslim, the Dönme were greeted in Turkey as if they were Jews,” explained historian Marc David Baer of the London School of Economics, in his 2010 book, “The Dönme: Jewish Converts, Muslim Revolutionaries, and Secular Turks.” “They were depicted as disloyal, sponging parasites who hoarded their wealth and did not sacrifice any part of their fortune for the sake of the nation.”

In response, the Dönme assumed a very low profile, and in due time the pressure to assimilate led to an almost complete loss of culture among the group’s members.

“After the establishment of the republic, any kind of minority was suspected, because they had two centuries of war and rebellion before that,” explained Kösemen, who published a book about Dönme graves.

Still, Turkey today continues to host a centuries-old, mostly Sephardic Jewish population of some 17,000 that has survived over many generations by adopting a low-key communal profile. Over the course of the Turkish Republic’s history, it’s suffered discrimination and occasional outbreaks of violence of its own, amid formal toleration. Today, its members report increased hostility tied to the ascent of the Islamist-oriented AKP and a period of strife between Turkey and Israel recently softened by a rapprochement.

The Dönme, meanwhile, as so-called “crypto-Jews,” are clouded in mystery and misunderstanding. They are the frequent subject of conspiracy theories. Most Turkish writing on them is anti-Semitic pseudoscience. For example, the country’s highest selling book of 2007 falsely “accused” President Recep Tayyip Erdoğan of being Dönme. Many Turks believe the Dönme are everywhere, seeing their conniving hands behind all sorts of evil deeds.

“In people’s minds, these secret Jews or whatever are like bogeymen,” Kösemen says.

Many believe the Dönme went extinct after being assimilated into the republic, but in fact a small, highly secretive community still exists.

In a quiet neighborhood on Istanbul’s Asian side, two middle-aged Dönme from different sects sip tea together.

Cem speaks rapid-fire English with a flawless American accent, picked up from living in Michigan as a child and later New York. Osman is a hardcore fan of the local Fenerbahçe football club and a wise-cracker, saying with a wink that the two have “unfortunately” been friends for over five years. He plays music on YouTube, calling himself a ‘Dönme DJ.’

They chat for hours about Dönme history, the complex beliefs of the three sects, which traditionally don’t intermarry, and most of all, about discrimination against their communities. They both only agreed to be interviewed on the condition of anonymity. They aren’t official representatives of the Dönme, and their views only represent themselves.

“Throughout the decades, the Dönme saw many acts of injustice,” Osman said. For instance, they suffered from a crippling ‘wealth tax’ targeting non-Muslims from 1942 to 1944, and nationalists painted stars of David on Dönme houses.

The two friends say that despite the historical prejudice, the Dönme believed in and in many ways embodied the ideals of Turkey’s founder Mustafa Kemal Atatürk, such as secularism and enlightenment. Atatürk’s hometown was in fact Salonika, and he went to a Dönme school, leading many conspiracy theorists to erroneously conclude that he himself was Dönme.

“Atatürk and our families had good ties,” Cem says. “He kind of looked favorably on us.”

But both Osman and Cem insist that the Dönme have never felt more uncomfortable than they do under the country’s current rulers. The authoritarian AKP has established a new model of Turkish society – ‘New Turkey’ – with a restrictive national ideal based on being a publicly pious Sunni Muslim.

“All of this previous oppression couldn’t create as much distress as the election of the AK Party,” Osman says, referring to Erdogan’s factional base.

The Islamist-rooted AKP has pushed Sunni Islam ever closer into public life in Turkey. Politicians make constant references to Islam and slurs against religious minorities; the Sunni-focused religious ministry’s budget has more than quadrupled, and Islamic education has massively expanded, in order to “raise a pious generation,” in Erdoğan’s words. Erdoğan once attended an awards ceremony for Necip Fazıl Kısakürek, an Islamist writer who called for the expulsion of the Dönme and seizing of their possessions.

Cem says the discrimination isn’t just against the Dönme. Anyone not fitting into the ‘New Turkey’ is made to feel unwelcome. Although the Dönme may be Turkey’s ultimate outsiders, about half the country doesn’t fit into the AKP’s New Turkey.

Cem and Osman say there are only perhaps 2,000 Dönme left who haven’t completely lost their cultural and religious identities. Cem’s worried that one day the culture could be completely lost.

Cem, whose sect is extremely secular, sees his Dönme identity as more cultural than religious.

“Being Dönme for me is being part of the Sephardic culture,” he said, since their ancestors were Jews who fled persecution in Spain and Portugal in the late fifteenth century for the relative religious freedom of the Ottoman Empire. “It means an interest in the Kabbalah, because our ancestors were extremely involved with studying it. It means mysticism.”

Osman, whose sect is more spiritual, explains what he means by mysticism.

“[Imagine] you’re reading a book written in black ink. You should see the white ink behind the black ink. That’s what mysticism is.”

“There’s an open meaning, and there’s a meaning that’s secret. Trying to decipher the secret meaning is what mysticism is about,” he says, such as reinterpreting passages from the Torah and finding new symbolic meanings.

The Dönme tradition of furtiveness comes not only from an effort to escape discrimination, but also for religious reasons. The members are obliged to secrecy according to the 18 Precepts – sort of their 10 Commandments. The secrecy also makes the religion more special and exclusive.

However, Osman is open to speaking about his faith in the hopes of ending common misconceptions.

“The more you hide and deny things, the more people start to make up nonsense about you, your community and your belief,” he says. “When your whole identity is secret, you leave the door open for this kind of subversion.”

Still, for this story, at least, Osman insisted on keeping his identity secret. Turkey clearly still has a long way to go before everyone can feel comfortable expressing their own identity.