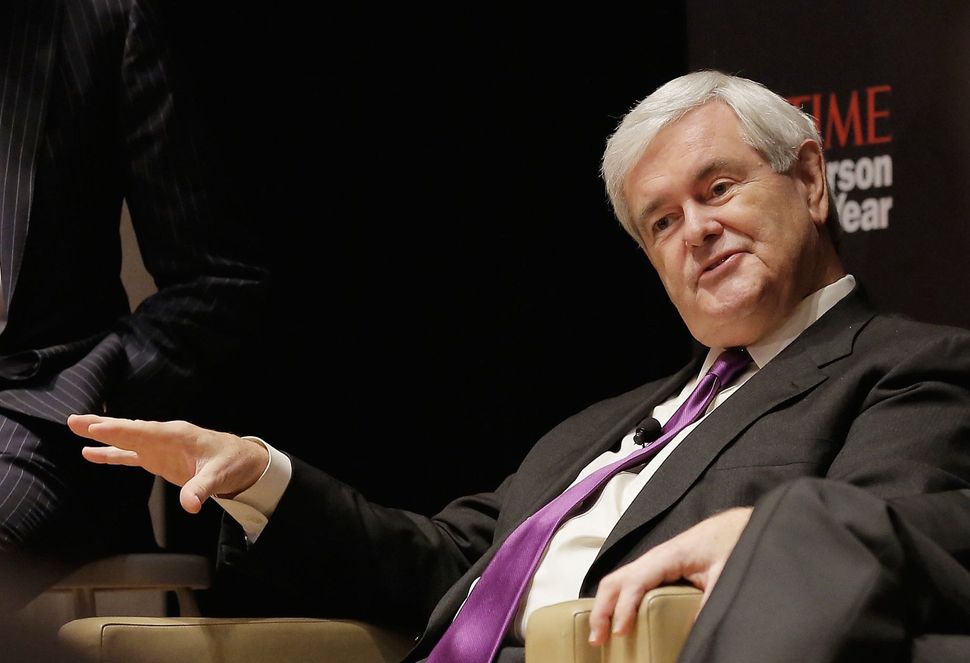 Newt Gingrich has raised questions about the murder of Democratic staffer Seth Rich, fanning the flames of conspiracy theories that link the unsolved slaying to the hacking scandal that has roiled the presidential campaign.

In an appearance on The Mike Gallagher Show last week, the former Republican presidential candidate Gingrich appeared to give credence to the claims that there was some nefarious motive to the July 10 slaying as Rich walked home in Washington D.C., despite the fact that police believe it was a botched street robbery.

“If it wasn’t a mugging and it wasn’t for money, what was it for?” Gingrich asked.

The killing of Rich has become a cause celebre for internet conspiracy theorists of various political stripes. Some believe he was killed to prevent him from dishing dirt on the Democratic National Committee, where he worked to expand voting rights, or the Hillary Clinton presidential campaign.

The theories gained some traction after it was revealed that the killer had not taken any of Rich’s possessions. Washington police have not made any arrests in the investigation into Rich’s murder.

Seth Rich’s parents recently made public statements asking that people dismiss theories that put their son at the center of an international political conspiracy — and to come forth if they have any information that could lead to the arrest of Rich’s killer.

The questions about Rich’s killing mounted after Wikileaks, which posted the hacked emails, promised a $20,000 reward for information about the Rich slaying.

On August 9, Wikileaks founder Julian Assange seemed to float the possibility that Seth Rich was Wikileaks’ source for the DNC emails. In an interview with a Danish TV show, Assange linked the risks that Wikileaks’ sources endure with Seth Rich’s death.

“[Our sources] go through significant effort to get us material and often very significant risks,” Assange said. “There’s a 27-year-old who works for the DNC, who was shot in the back – murdered – just a few weeks ago for unknown reasons.”

“What are you suggesting?” asked Assange’s interviewer.

“I’m suggesting our sources take risks,” Assange said. “They become concerned seeing something like that.”

American security experts widely agree that hackers linked to Russia created the virus that led to the leak, which would seem to rule out the possibility of a staffer like Rich handing over the trove of emails to Wikileaks.

But Gingrich suggested that Assange had in fact named Rich as the source for the leaks.

“First of all, of course it’s worth talking about,” Gingrich said. “And if Assange says he is the source, Assange may know. That’s not complicated. Whether it has any meaning in the presidential campaign, I don’t know.”

The Wikileaks Twitter account published a tweet on August 10 backing down from what many perceived as Assange’s suggestions that Rich was their source for the DNC leak.

Our original and only statement on the murder of US Democratic National Committee staffer Seth Rich. #DNCLeak pic.twitter.com/Qsjfyb696p

On The Mike Gallagher Show last week, Gingrich also seemed to cite his experience writing two political intrigue novels as a pretext for making guesses about the nature of Seth Rich’s killing.

“[If] it clearly wasn’t a mugging and it wasn’t for money, what was it for?” Gingrich said. “I think just in that sense, as you know I’ve written two novels: Duplicity about terrorism and the presidential campaign and the follow-one Treason is coming out. We have these kind of scenes in there where you begin to realize that there are dangerous things going on in the world.”