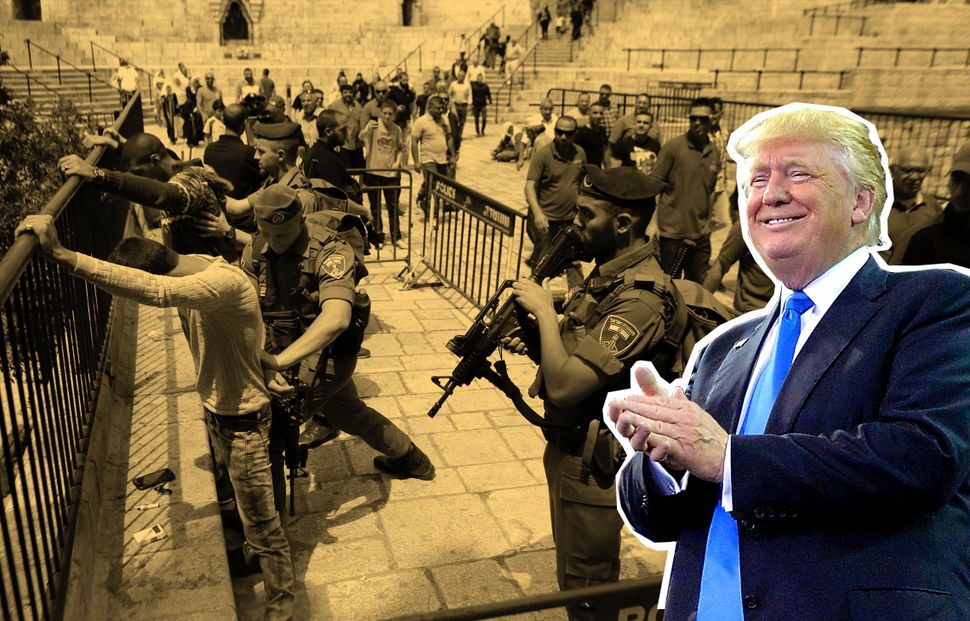 Back in 1994, Prime Minister Yitzhak Rabin promised the Israeli people that the newly signed Oslo Accord would not lead to a surge in terrorism, even though the Palestinian Authority would take control of parts of the West Bank and Gaza. Rabin could make this promise, he said, because the P.A. — unlike Israel — didn’t have to operate under legal and civil society constraints.

“Without a Supreme Court and without human rights watchdogs,” he said, predicting how effective the P.A. would be in policing its own people.

More than 20 years later, this idea might sound familiar. Republican presidential candidate Donald Trump says we should prevent terror attacks like the one in New York City on September 15 by using Israeli-style profiling and other anti-terror tactics. But experts say the GOP nominee fails to understand basic tenets of Israeli policy — and misrepresents others. Democratic candidate Hillary Clinton strikes a very different tone.

Trump says, as Rabin did, that political correctness and governmental timidity can inhibit the fight against terror.

“We will not allow political correctness and soft-on-terror, soft-on-crime policies to threaten our security and our lives,” Trump said Monday, September 19, hours after the capture of Ahmad Khan Rahami, the suspect in the New York and New Jersey bombing attempts.

“Trump’s statements in past days are more like a 14-year-old’s perception of what Israel’s terror policy really is,” said Neri Zilber, an adjunct fellow at the Washington Institute for Near East Policy who is based in Tel Aviv. “It’s a false conception of what Israel does on the ground.”

In response to the bombings and stabbing, Trump directly invoked Israel when explaining his call for use of racial profiling as a legitimate way to fight terrorism.

Israel does indeed profile, especially in its airport security operation, but not nearly as broadly or indiscriminately as Trump suggests; Israel does not target all Muslims. Israeli authorities focus on young, single Palestinians who they believe pose a greater security risk than other population groups. While Israel’s profiling has been condemned internationally, it is far less sweeping than that urged by Trump.

Trump also says he believes torture is an effective method of extracting information from terrorists.

“Torture works. Okay, folks? You know, I have these guys — ‘Torture doesn’t work!’ — believe me, it works,” he said in February during a campaign event in South Carolina at which he backed waterboarding and “much worse.”

And Israel uses torture as well, but only in cases described as “ticking bomb” situations, in which a terrorist has vital information that can be used to save lives immediately. Israel had a public debate about torture two decades ago, and it concluded that the use of torture demands rigid limits, set first by a public committee and later by the Supreme Court. Trump has called for a blanket authorization for using torture techniques, while Israel regulates it.

Where Trump does hew closer to Israel’s actual counterterrorism practices is on the distinction he wants to make between criminal suspects and enemy combatants. In Israel, Palestinian terror suspects (but not Jewish ones) are tried in the military justice system, which allows prolonged detention before charges and conducts trials based heavily on classified information that the defendant cannot access. Trump admires this system and has called for terror suspects on United States soil to be tried not in civilian courts, but as foreign enemy combatants, a definition used in the past to justify the incarceration of detainees in the prison on Guantanamo Bay and their trial in military tribunals.

“Congress should pass measures to ensure that foreign enemy combatants are treated as such,” Trump said September 19. “These are enemies, these are combatants, and we have to be tough, we have to be strong.”

Where Trump can’t score points with Israelis looking for international validation of their own practices and methods is on the issue of national security experience. He doesn’t have it; Clinton does, and Israelis value that.

“I’m the only candidate in this race who’s been part of the hard decisions to take terrorists off the battlefield,” Clinton told reporters August 17 before boarding her campaign jet.

It is an argument that Israel’s liberal opposition leaders have struggled with for years, lamenting their inability to take over the premiership due to the perception that their lack of sufficient military and national security credentials disqualified them from that highest office. History proves this point valid in Israeli politics — the only electoral success the country’s Labor Party has seen was when led by Rabin and by Ehud Barak, both former generals who had entered politics with years of national security experience.

Clinton doesn’t invoke Israel when she talks counterterrorism. She spoken out against profiling; after the New York City bomb explosion, she repeated her frequent claim that profiling Muslims or targeting entire communities would only inflame terrorism and serve as a recruiting tool for extremists. “We know that a lot of the rhetoric we’ve heard from Donald Trump has been seized on by terrorists, in particular ISIS [the Islamic State group],” she told reporters at a press conference outside her campaign plane in White Plains, New York, on August 17.

“I am proud to have been a part of the Obama administration that banned illegal renditions and brutal interrogations,” Clinton said at a gala in 2014 after the release of a CIA report on torture. “Yes, the threat of terrorism is real and urgent,” she added, but the crowd should “steel our resolve and underscore that our values are what set us apart from our adversaries.”

Whoever wins the election, Israelis hope that terror attacks in the United States will induce American leaders to show more sympathy to the Israeli struggle. “Today the entire international community says that there is a need to wage a determined and uncompromising fight against terrorism,” Israel’s prime minister, Benjamin Netanyahu, told reporters before leaving for New York, where he will attend the United Nations General Assembly. “And indeed, they must also support the determined and uncompromising fight against terrorism, and this moral clarity is necessary to both fight against — and defeat — terrorism.”

Netanyahu has long protested what he and other Israelis see as a double standard in which other countries pressure Israel to use restraint in dealing with terrorists but don’t do the same thing when terror hits their own citizens.

“Any time you have a terror attack in Europe or in America, Israelis hope the world will understand what they’ve been dealing with for years,” Zilber said, “that Israel is the canary in the coal mine. “