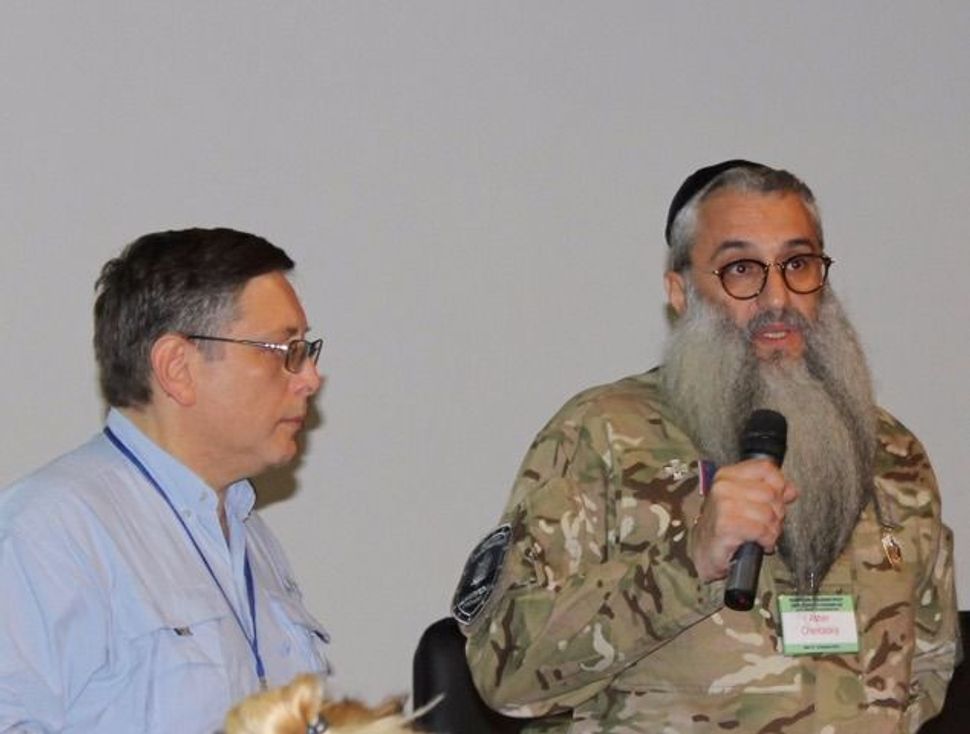 This year’s commemoration of the Babi Yar massacre—the Nazis’ mass shooting of more than 33,000 Jews at a ravine in northwest Kiev 75 years ago—comes at a critical time: as Ukraine continues to resist Russia’s military threats and violations of its territorial sovereignty.

Russia, in turn, has often justified itself and sought to delegitimize the government in Kiev by pointing to extreme right-wing Ukrainian nationalist militias and factions supporting the government that have a record of collaboration with the Nazis during World War II and of support for fascism.

Against this backdrop, the appearance of Asher Cherkassky at a four-day conference now taking place to commemorate the Babi Yar anniversary was a striking event. With his army fatigues, long greying beard and black kippah, Cherkassky looked halfway between a combat soldier and a rabbi. He could just as well have been a captain in the Israel Defense Forces. But he is not; Cherkassky, yarmulke and all, is a Ukrainian patriot who has been fighting with Right Sector, the very nationalist militia Russian leader Vladimir Putin has been denouncing for anti-Semitism.

Cherkassky felt a calling to join the conflict in 2014, after the so-called Maidan Revolution toppled the government of Ukraine’s pro-Putin President, Viktor Yanukovych, and war broke out between Russian-supported rebel groups and Ukraine government forces in the country’s east. Cherkassky latched on to a paramilitary battalion aligned with Right Sector.

During World War II, in their fight for independence from the Soviet Union, many Ukrainian nationalist factions joined the Nazis out of mutual enmity toward the USSR. Today, Right Sector defines itself as “neither xenophobic nor anti-Semitic, as Kremlin propaganda claims,” according to the group’s self-description, quoted in Le Monde diplomatiqe—but also as “nationalist, defending the values of white, Christian Europe against the loss of the nation and deregionalisation.” The group, whose leader drew less than 2% of the vote in Ukraine’s 2014 presidential election, rejects multiculturalism, as “responsible for the disappearance of the crucifix and the arrival of girls in burqas in your schools.”

Nevertheless, Cherkassky presented himself as a symbol of bridged divides between Ukrainians and Jews that are bared raw by discussion of the Holocaust. In discussing relations between himself and other members of his battalion at his September 25 appearance, Cherkassy said, “We became one family.” He further affirmed his conviction of the need to protect a free Ukraine, describing the country as a free society in which he is allowed to practice his religion without question. “We believe that because of our unity and mutual respect, we can beat any enemy,” he told the audience.

David Fishman, an expert on the former Soviet Union at the Jewish Theological Seminary, in New York, said that the experience of fighting alongside Jews may have had an effect on the Right Sector’s language towards Jews. In 2014, Right Sector’s leader, Dmitry Yarosh, met with the Israel’s ambassador to Ukraine to allay concerns and to pledge to fight racism and anti-Semitism in Ukraine.