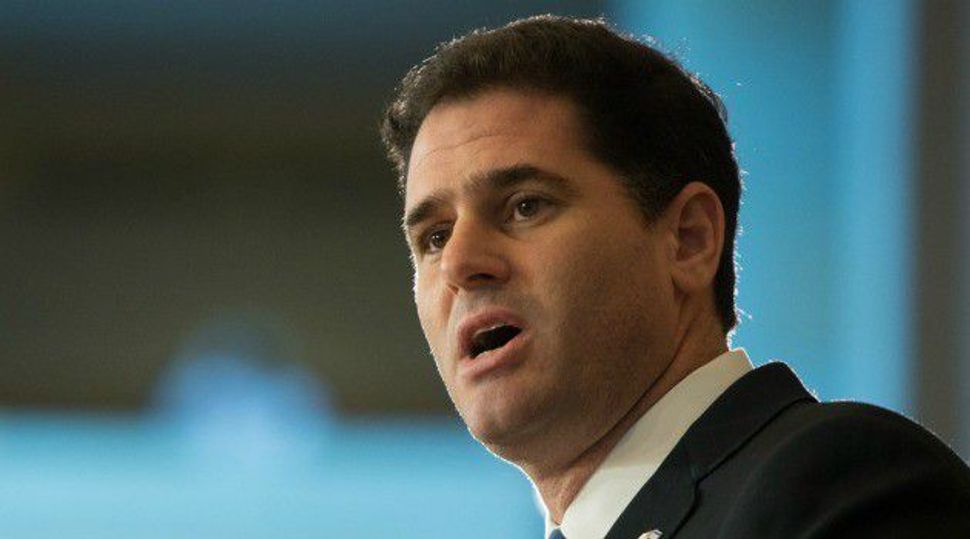 The event was attended by community leaders as well as administration officials. Absent from the memorial ceremony was Israel’s ambassador to Washington Ron Dermer, who was out of town.

Dermer was also away when President Obama spoke at Adas Israel last year.

“In the history of the United States, a president or vice president spoke from the bimah only four or five times,” said a community member who asked not to be identified. “It happened twice while Dermer was ambassador in Washington and he wasn’t there both times. How is the possible?”

Adas Israel, a Conservative synagogue, is the American capital’s highest-profile place of Jewish worship and attracts the most celebrity speakers. It’s located in the city’s affluent northwest quadrant, not far from the Maryland border.

Rabbi Gil Steinlauf, Adas Israel’s senior rabbi, said that the congregation was disappointed that Dermer couldn’t make it. But he also noted that Deputy Ambassador Reuven Azar spoke at the event and “did such a wonderful job.” Steinlauf noted that the memorial event was scheduled on a short notice and that Dermer was unavailable due to a family event.

The Israeli embassy explained it was no more than an unfortunate coincidence.

“The ambassador wanted to participate but he had to be out of town for a personal reason,” said Israeli embassy spokesman Itai Bardov.

Sources on both sides of the discussion told the Forward that attempts were made to accommodate Biden’s schedule and Dermer’s travel plans, but the only time slot available for Biden was too late for Dermer.

“What I would like to take away,” said Steinlauf, “is not focusing on who showed up, but on the opportunity the American Jewish community had to mourn Shimon Peres.”