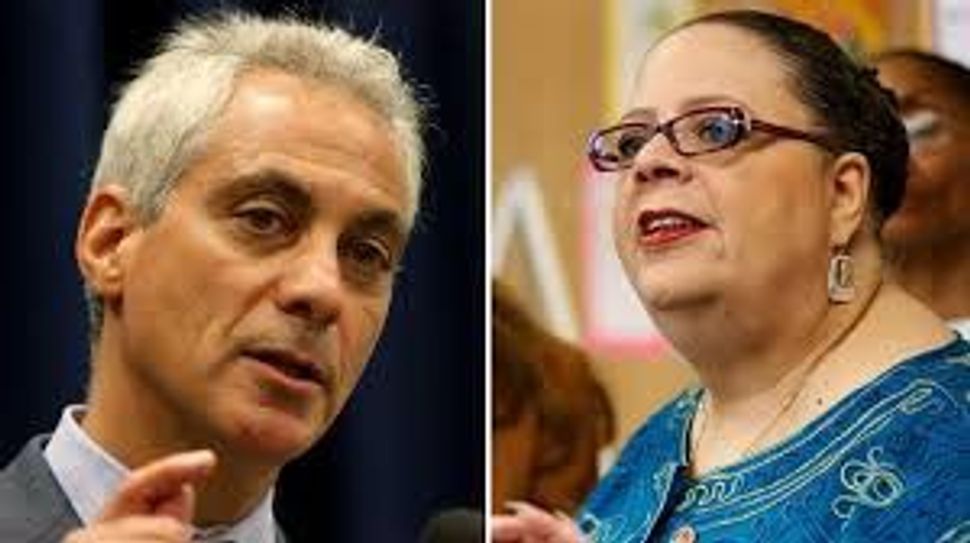 A Chicago Public Schools teachers’ strike was narrowly averted when union leaders, Mayor Rahm Emanuel and school board officials came to a tentative last-minute agreement late Monday night, just minutes before the deadline at midnight October 9. The strike, which would have kept nearly 380,000 students out of class, had been scheduled to begin at 6 AM Tuesday.

During an earlier teachers strike, in 2013, Chicago Teachers Union president Karen Lewis tangled ferociously with Mayor Rahm Emanuel, who at one point during their talks deployed his famously salty tongue to curse her out. But in the aftermath of that conflict, which Lewis was seen as winning, their public relationship changed markedly.

“I wouldn’t say we are ‘text buddies,’ but I don’t have a problem texting him or calling him,” Lewis told the Chicago Tribune in the run-up to talks this time. “We’ve passed the rudeness. Rudeness didn’t work, right? And it didn’t work because I’m from the South Side. I know bad words too. I can take my earrings off, put Vaseline on my face and go. I can do that!”

Lewis scrapped her own plans to run against Emanuel for mayor in 2015 when she was diagnosed with brain cancer — an experience, she told the Tribune, that had changed her profoundly.

“God said, ‘Hey hey! Time for you to sit down before you break something,’ “

Following announcement of the strike settlement, she told a press conference, “What we ended up with is something that’s good for kids, is good for clinicians, is good for paraprofessionals, for teachers, for the community and we’re very pleased that we were able to come to this tentative agreement.”

One of the main points of contention between the Emanuel and the CTU was pensions. The city had proposed requiring the teachers to contribute a greater percentage of their salaries to the general pension fund without offering a commensurate increase in pay. Under the tentative agreement, which still needs to be ratified by the union’s House of Delegates, new hires will be required to pay 9.4% of their salaries to the pension fund, while existing employees will continue to contribute 2% of their salaries and the city pays 7%. But new hires will also receive two 3.5% raises, one in January and the other in June, while existing employees will receive cost of living pay increases. There will also be “steps and lanes” that reward teachers for experience and additional training.

The city also pledged that $7 million will be earmarked to hire teaching assistants in kindergarten through second grade classrooms with more than 32 students, that teachers will have more prep time during the school day and that tenured teachers who have been laid off will be rehired

“The teachers’ hard work will be respected in this contract, and appropriately rewarded,” Emanuel said in a separate press conference at City Hall. “Chicago Public Schools’ finances will be stronger and on firmer ground because of this agreement. Parents and taxpayers will be relieved, and more importantly, reassured, that we all came together to work together with a common purpose.”

The tentative agreement is also good for Emanuel, who has faced a series of political setbacks in the past few years, including a runoff after failing to win a majority in last year’s mayoral election and widespread outrage following the release of video footage of Chicago police officer Jason Van Dyke shooting 17-year-old Laquan Macdonald to death. Emanuel was accused delaying the video’s release for months for political reasons tied to his re-election.