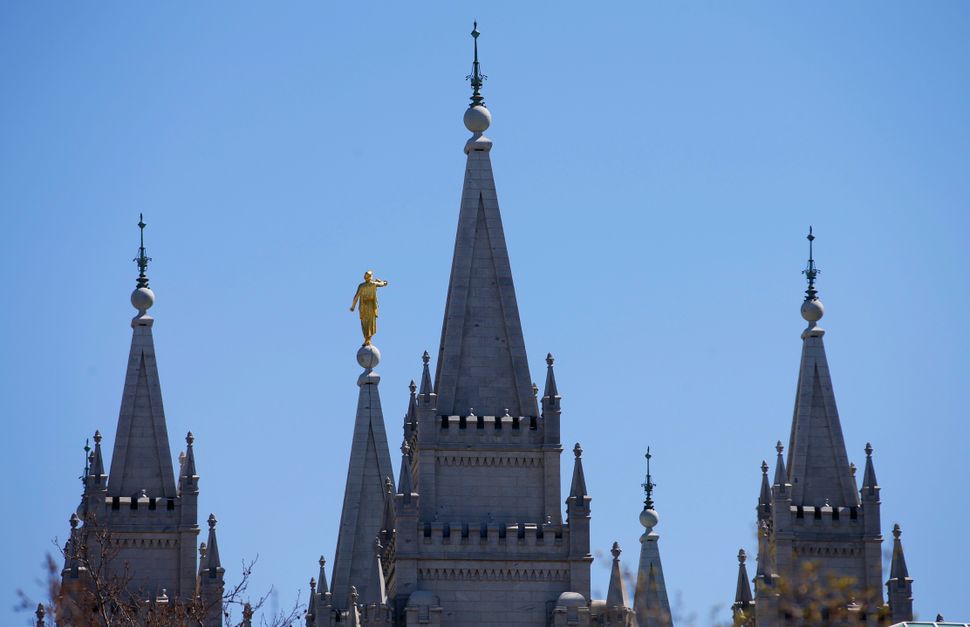 In Utah, the presidential ticket of Evan McMullin (a Mormon) and Mindy Finn (a Jew) has a real shot at winning the state. During our reporting on this, we found that there are a lot of Mormons who really like Jews.

So why do have Mormons a soft spot for Jews?

“Mormons feel a great affinity for all things Jewish and Israel,” Robert A. Goldberg, a history professor and expert in Mormon Studies at the University of Utah, told the Forward. “Mormons ‘feel’ Jewish – or at least that Jews and Mormons are Biblical cousins,” he added.

It started 200 years ago

“This goes back to the 19th Century,” explained Goldberg. Back then, Mormon settlers called themselves “Camp of Israel” as they crossed the plains in what would become Utah. They also named the river connection the Great Salt Lake and the Utah Lake after the River Jordan.

Brigham Young, one of the first Mormon leaders and the founder of Salt Lake City, offered local Jews a place to hold High Holiday services and donated the land for the first Jewish cemetery.

The first Reform synagogue in Salt Lake was funded by the Mormon Church.

“In general, Mormons are staunch Zionists,” Goldberg explained. As an example, he pointed to a Jewish agricultural colony in Utah that was founded in 1911 and supported by the Mormon church.

In 2009, a former Mormon bishop even became the regional director in the “Zionist Organization America,” one of the oldest pro-Israel organizations in the United States.

In 1967, self described Jewish Mormons founded a group called “B’nai Shalom” (Hebrew for “Children of Peace”).

On their website, they describe themselves “a valuable resource for Jewish Mormons and friends who want to bridge the differences of understanding and knowledge between religions and cultures. […] A common topic is of bringing Joseph (Ephraim) and Judah together.”

They organize semi-annual events with Jewish and Yiddish food, music and dance on the eve of a big Mormon church gathering in Salt Lake City that attracts people from the whole country.

“We really do not lose any of our Jewish heritage,” Chelsea Woodruff, a high school Spanish teacher from Arizona told the Deseret News. “We absolutely love our Jewish heritage. We believe Jesus Christ was the Jewish fulfillment of scripture, and we honor him as the most Jewish person of all. He is our Messiah.”

Democrat Harry Reid, the Senate minority leader, has a mezuzah on his Nevada home to honor the family heritage of his wife. Landra (née Gould), was raised Jewish and converted to Mormonism.

And Utah’s Republican Senator Orrin Hatch even wears a mezuzah around his neck.

That’s not the only way in which the senior senator from Utah shows his connection for Judaism. He also wrote a catchy holiday song called “Eight Days of Hanukkah.”

“Anything I can do for the Jewish people, I will do,” Hatch told the New York Times in 2009, when the video was released. “Mormons believe the Jewish people are the chosen people, just like the Old Testament says.”

Hatch is known as a writer of Christian hymns and patriotic songs, for example he wrote a song called “Heal Our Land” for the second inauguration of G.W. Bush.

Mormon University has a Campus in Jerusalem

In a four month exchange program, students “study a core curriculum that focuses on Old and New Testament, ancient and modern Near Eastern studies, and language (Hebrew and Arabic),” according to BYU’s website. “Classroom study is built around field trips that cover the length and breadth of the Holy Land, as well as travel to Jordan and to Turkey, Egypt or Greece.”

At the time the center opened, it was met with a lot of public outrage, but it has since became an accepted institution.

The center is located on Mount Scopus overlooking the Mount of Olives, the Kidron Valley, and the Old City.

The Mormon love for Jews took a slightly darker note in the 1990s, when it was revealed that church members had posthomously converted famous Jews and Holocaust victims to Mormonism.

It has been a longtime practice of Mormons to vicariously baptize their relatives, so that the entire family can achieve exaltation. This is supposed to only happen if family members request it, but in 1995 researchers discovered the names of thousands of Holocaust victims in a Mormon genealogical index that lists proxy baptisms.

Under public pressure, Mormon officials promised to stop the practice, but they lacked oversight and it continued to happen. The Jews baptized included Anne Frank, Albert Einstein and Simon Wiesenthal’s parents.

“Our preeminent obligation is to seek out and identify our own ancestors. Those whose names are submitted for proxy temple ordinances should be related to the submitter,” the letter read. “Without exception, Church members must not submit for proxy temple ordinances any names from unauthorized groups, such as celebrities and Jewish Holocaust victims.”