Evan McMullin is listening to his running mate, Mindy Finn. Image by Twitter/TeamMcMullin

A Mormon and a Jew walk into a bar. What sounds like the beginning of a joke is an important political reality in 2016 — at least in Utah.

Finn is a veteran GOP strategist who runs a feminist non-profit. The Texan has been an early and outspoken critic of Donald Trump.

McMullin, a former CIA operative from Utah, is a Mormon, Finn is a Jew. On Twitter people call them McMuffin.

Spurred by Donald Trump’s plunge in the polls, the conservative ticket backed by Mitt Romney has now a plausible chance of winning Utah, a traditionally red state with a majority Mormon population.

In recent polls, McMullin beats Clinton in Utah and is statistically tied with Trump. If he succeeds, it would be the first time since 1968 that a presidential candidate who is not a Democrat or Republican has won a state.

The McMullin campaign did not respond to a request for comment from the Forward.

Mormons have a long history of affection towards Jews. Utah’s senior Senator Orrin Hatch, a Mormon, even wears a mezuzah on a chain around his neck and wrote a song called “Eight Days of Hanukkah”.

Yet when it comes to Finn, this political Mormon-Jewish love story doesn’t really play out in the local media. In fact, a lot of Utahns don’t even know who Mindy Finn is.

“While I am obsessed by this election, I had no idea who Mindy Finn was or that she was Jewish,” Robert A. Goldberg, a history professor at the University of Utah, told the Forward when asked about McMullin’s running mate. “There has been nothing in the local newspapers about her or her religion.” 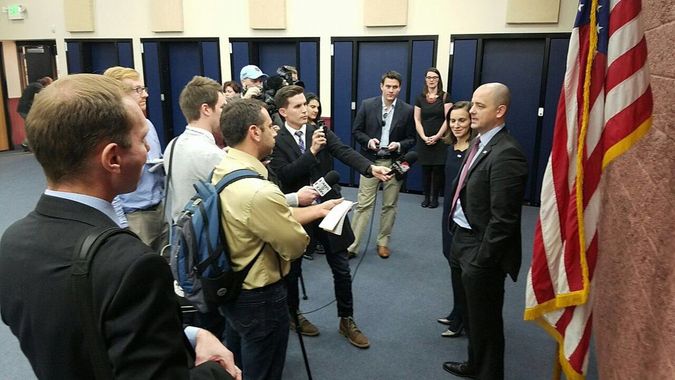 McMullin and Finn talk to the media at the American Preparatory Academy in Draper, Utah. Image by Twitter/TeamMcMullin

Goldberg is the director of the Tanner Humanities Center and an expert in Mormon Studies.

“Mormons feel a great affinity for all things Jewish and Israel,” he explained, even going so far as saying that a lot of Mormons “feel” Jewish, or feel “at least that Jews and Mormons are Biblical cousins.”

Back in the 19th century, Mormon settlers called themselves “Camp of Israel” and named a big river connecting two lakes, Jordan. The Mormon church also supported a Jewish agricultural colony in Utah established in 1911. In general, Mormons are staunch Zionists.

Taking all this into consideration, Goldberg said that Finn being Jewish “could only be a plus in Mormon minds regarding a vote for the McMullin ticket.”

If they knew about it, that is.

The national media has produced several profiles about Finn, all mentioning that she is Jewish. But the local coverage in Utah focuses almost exclusively on McMullin.

Take for example, the Salt Lake Tribune, Utah’s biggest newspaper. A search on their website found dozens of articles about McMullin, but only six of them even mentioned his running mate.

The Deseret News is the only state newspaper that did a story focused solely on Finn.

This isn’t a deliberate attempt to ignore Finn though, said Katie England, a journalist who covers the Utah Legislature for the Daily Herald.

Instead “people are still trying to find out who Evan McMullin is,” she told the Forward.

McMullin’s rise in the polls only started after the NBC tape with Donald Trump making lewd comments was released, so voters in the the Beehive State haven’t had much exposure to him.

England met McMullin and Finn personally during an editorial board meeting, but even afterwards, the reporter was not aware “that she [Finn] is Jewish.”

Another journalist based in Salt Lake City agreed that McMullin’s campaign wasn’t on anyone’s radar until the Access Hollywood tape.

“To be honest, there’s still so much voters don’t know about McMullin, that we haven’t even started to look very deeply at his running mate,” the reporter, who asked not to be identified by name, told the Forward.

“My guess is that most voters don’t know much about Finn, including that she’s Jewish,” the journalist said, adding “while I can’t speak about the attitudes of every Utah voter, I will say that Utah as a whole seems to be respectful of Judaism.”

“Being Jewish in Utah has been great,” she told the Forward. “I grew up reading about anti-Semitism, but experiencing very little of it here in Utah. People are very respectful of my religion.”

Arent was a super delegate at the Democratic convention and supports Clinton. Even though she is very involved in Utah politics, she hasn’t heard much about Finn. “She is not anywhere. Nobody is talking to her,” Arent said.

Part of that stems from the fact that Finn isn’t actually on the ballot in Utah. The veteran GOP strategist joined the campaign after filing deadlines had passed, so McMullin had to use a place holder name instead.

For many Mormons their support for McMullin is more of a protest vote anyways, she said. “Most Utahns just don’t respect what Donald Trump stands for,” Arent told the Forward.

The distaste many Mormons feel for Trump could be enough to turn a state that has reliably voted Republican in the last 12 presidential elections. With two weeks to go, the McMullin/Finn ticket has tied with Donald Trump and surpassed Hillary Clinton.

To all accounts, it seems that McMullin is taking votes from Trump. A loss for the Republican nominee is expected to help Clinton nationwide. Still, Utah professor Robert Goldberg hasn’t heard of any Democrats voting for McMullin in order to help Clinton.

And neither are Jews.

“Jews in Utah are solidly behind Hillary,” Goldberg told the Forward. “Regardless of McMullin’s running mate.”