In the last decade, scandals involving kosher slaughter have led to dramatic improvements in the industry. But both the U.S. and Israel continue to import beef certified as glatt kosher that is slaughtered in ways that animal welfare experts condemn as inhumane and cruel.

Kosher meat production plants in the South American nations of Uruguay, Paraguay and Argentina use a slaughter method known as “shackle and hoist” whereby the cow is pulled up into the air by one of its hind legs and then dropped onto the ground before its throat is slit.

The method is mostly prohibited in the United States. The Orthodox Union, the country’s largest kosher certification agency, has repeatedly said that it objects to the practice.

But it still considers the meat to be kosher — and certifies it as such.

Undercover video footage taken by the animal rights group People for the Ethical Treatment of Animals revealed the persistence of the practice, which the OU has condemned for years. Their investigation was a joint venture with the Israeli group “Anonymous for Animal Rights.”

The video was shot at the end of July by undercover investigators in Paraguay. A copy of the video was obtained exclusively by the Forward. (Watch the video here. Viewer discretion is advised.)

“What we have here is just incredibly disturbing,” said Hannah Schein, the Associate Director of Undercover Operations at PETA. She said the workers seen in the video used “torturous methods.”

In the video, the animals can be seen hanging from a single leg, struggling in the air and bellowing. Once the animal is put on the ground, it is shown writhing and being restrained with a sharp trident-like device called a “devil’s fork” before the cut. 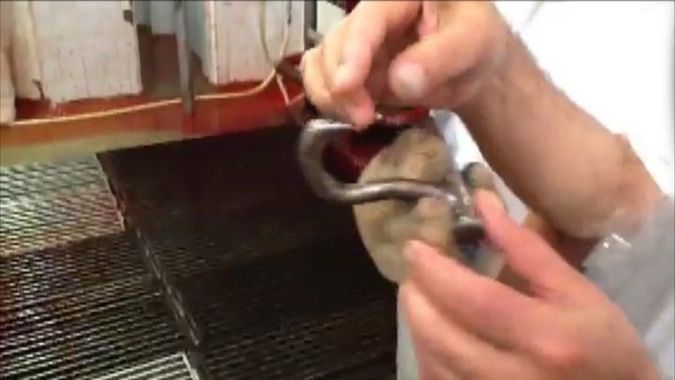 A sharp nose-hook is commonly used to restrain conscious, flailing cows before their throats are cut. Image by PETA

Immediately after the cut, the animals are hoisted to the rail for processing. The video shows how workers cut into the heads of animals while they are still conscious and moving.

The workers use a spike called a “puntilla” that is driven into the cow’s spines and paralyzes them. The animals stop moving after that, but that doesn’t mean they can’t feel pain anymore, animal experts say.

“The head can remain conscious after the spine is severed,” said Dr. Temple Grandin, a professor in Animal Sciences at the Colorado State University, in an expert opinion prepared for PETA.

“The shackling and hoisting shown in this video is a violation of all industry and international welfare guidelines,” Grandin added.

In kosher slaughter animals are supposed to be conscious when the cut is made, but other than that there aren’t too many specifics.

“In properly conducted kosher slaughter, you would ideally have no stress on the cow,” said Hannah Schein, a kosher slaughter expert at PETA. “They would make the cut and just wait. It’s obviously not great, but at least it causes them as little suffering as possible.”

Rabbis have decried the practice, but it persists.

In 2000, the Rabbinical Assembly of Conservative Judaism passed a ruling calling the “shackle and hoist” method a “violation of Jewish law.”

Rabbi Morris Allen is the co-founder of the Conservative Movement’s Magen Tzedek, an organization that offers ethical certifications for Kosher food. He criticized the plant’s practices.

“It is unfortunate that a company that promotes the strictest interpretation of Jewish dietary laws – as it relates to the kashrut of the meat – shows little concern for the safety of the workers, the responsibility towards the animal and its commitment to the earth in its production of that food,” Allen told the Forward.

But it has different standards for South America, although it criticizes shackle and hoist slaughter.

In 2008, Rabbi Menachem Genack, the CEO of O.U.’s Kosher Division, told the Forward, “It’s not the kind of system that we want to have, that we would be proud of.”

Three years later, he again said, “It’s not the system we recommend or have been advocating.” But he added that cutting exports from South America “would represent a disruption of supply and inevitably would mean kosher meat would go up higher in price.”

Contacted about the new undercover video by PETA taken in a plant in Paraguay, his only comment was, “The O.U. has never been in that plant and no O.U. production takes place there.”

Shackle and hoist remains popular among kosher producers in South America, because it allows the cow to be upside down when it is slaughtered — as is required by Israel’s chief rabbis, the final authorities on kosher meat entering the Jewish state.

The plant shown in the PETA video is located in Limpio, a city in central Paraguay.

Currently, Paraguay does not export beef to the United States, but 40 percent of the beef consumed in Israel is Paraguayan.

And Americans import millions of tons of beef from countries like Argentina and Uruguay, where shackle and hoist is the common practice in kosher slaughterhouse.

The video also shows shackle and hoist footage of plants in other South American countries, as well as other inhumane practices like the use of electric prods or spikes stuck into the chins of a cattle.

“We know there is no such thing as humane slaughter,” said Hila Keren, a spokesperson for Anonymous for Animal Rights, who partnered with PETA in the investigation.

“Killing an animal on an industrial production line always involves enormous pain and suffering. We had expected to see cruelty, but what we saw in South America was unimaginable,” Keren told the Forward.

This is not the first time that PETA went undercover in kosher slaughtering houses in South America, although previous efforts didn’t produce such extreme footage.

“After our first investigation in South America into shackle and hoist caused an uproar, the Israeli Chief rabbi promised to end it,” Schein told the Forward.

In 2011, the chief rabbinate again promised to stop imports from plants using shackle and hoists, but so far no progress has been made.

Both PETA and Anonymous for Animal Rights hope that the release of the video footage will lead to action this time.

“We hope that the Ministry of Agriculture prohibits this horrible cruelty, and that the Chief Rabbinate fulfills its commitments to instruct importers to phase out shackle-and-hoist slaughter,” Keren told the Forward.

PETA’s Schein believes it’s ultimately up to the consumer. “Companies are not going to want to decrease their profit margins, until consumers demand it,” she said. “We hope that the video will open consumer’s eyes”

There are, however, some signs of progress.

PETA pointed to Breeders & Packers in Uruguay (BPU) as a positive example. BPU is the first plant in South America that does upright kosher slaughter, following guidelines for humane ritual slaughter designed by Dr. Temple Grandin.

“It used to be that if you buy kosher meat, if it hasn’t been killed in America it was killed in a cruel way,” Schein told the Forward.

“Now there is at least a chance that it’s killed in a more acceptable way.”