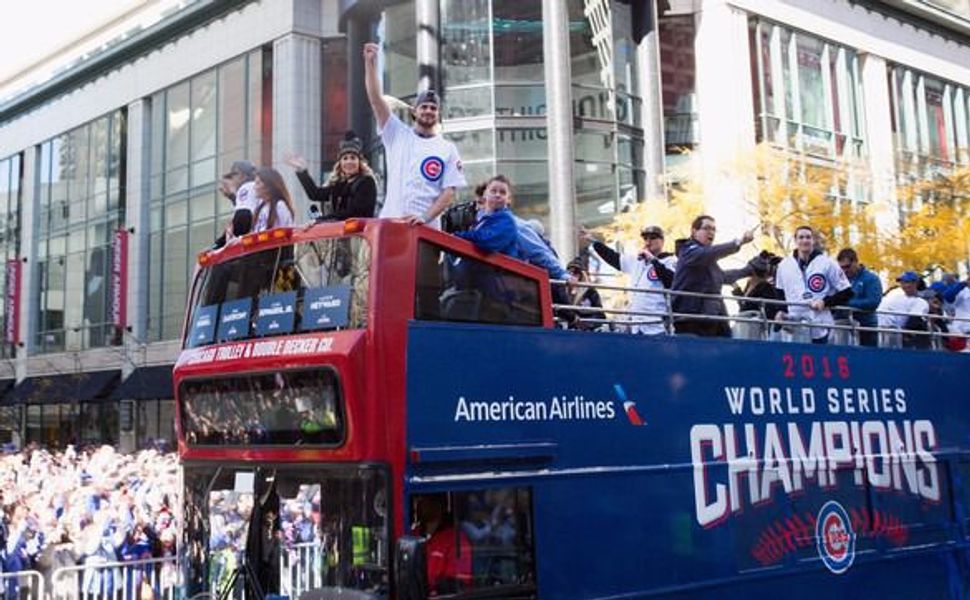 The Chicagoland Scanner Twitter feed (@CFGScanner) was especially lively all that previous night, recording the deeds of overzealous revelers: the cars that were smashed, the man who had required emergency care after falling off a light pole, and the fans who climbed over the wall into Wrigley Field itself.

Most of the celebrations, though, were peaceful, albeit drunken and loud. Some fans engaged in a form of baseball gematria: it had been 108 years since the Cubs last won a World Series, there are 108 stitches on a baseball, there were 108 days till pitchers and catchers report to spring training, 108 is the number you get when you add up the digits of game 7 starting pitcher Kyle Hendricks’s date of birth (12/7/89).

On Thursday morning, lines stretched down Addison Street as fans lined up to buy championship caps and t-shirts, and take selfies in front of the Wrigley Field marquee, which read, for the first time ever, “World Series Champions.” (The ballpark hadn’t been built in 1908 when the Cubs last won the Series; the team had played at the now-destroyed West Side Grounds near what is now University of Illinois-Chicago Medical Center.)

Many fans took a moment to remember their family members who had lived and died without seeing a Cubs World Series victory. Wrigley Field itself became a memorial as people wrote the names of their loved ones on the wall in chalk. Other fans took radios out to the city’s cemeteries so the dead could hear the game, too, and some heaped green apples around the gravestone of broadcaster Harry Caray, for decades the voice of the Cubs, who had promised, “Sure as God made green apples, someday the Chicago Cubs are going to be in the World Series.”

The Chicago cast of “Hamilton” honored the team by concluding Thursday night’s performance with a singalong of Steve Goodman’s anthem “Go, Cubs, Go.”

Mayor Rahm Emanuel, who had been on hand in Cleveland for Game 7, declared Friday a civic day of celebration. He decreed further that the Chicago River, normally a flat shade of greenish-gray, would be dyed “Cubbie Blue” for the day. Schools and businesses closed their doors so Cub fans could attend the victory parade, which began at 10 A.M. Friday at Wrigley Field and concluded with a rally in Grant Park on the downtown lakefront,. But celebrants, many of whom had traveled to Chicago from other towns and states, started lining up hours before then.

It was the start of a wild weekend of celebration before the city woke up Monday to face the sobering prospect of a national election on Tuesday that could put Republican candidate Donald Trump in the White House. Chicago, whose politics are no less deep blue than is its post-victory Cub-blue passion for their team, shuddered at the thought.