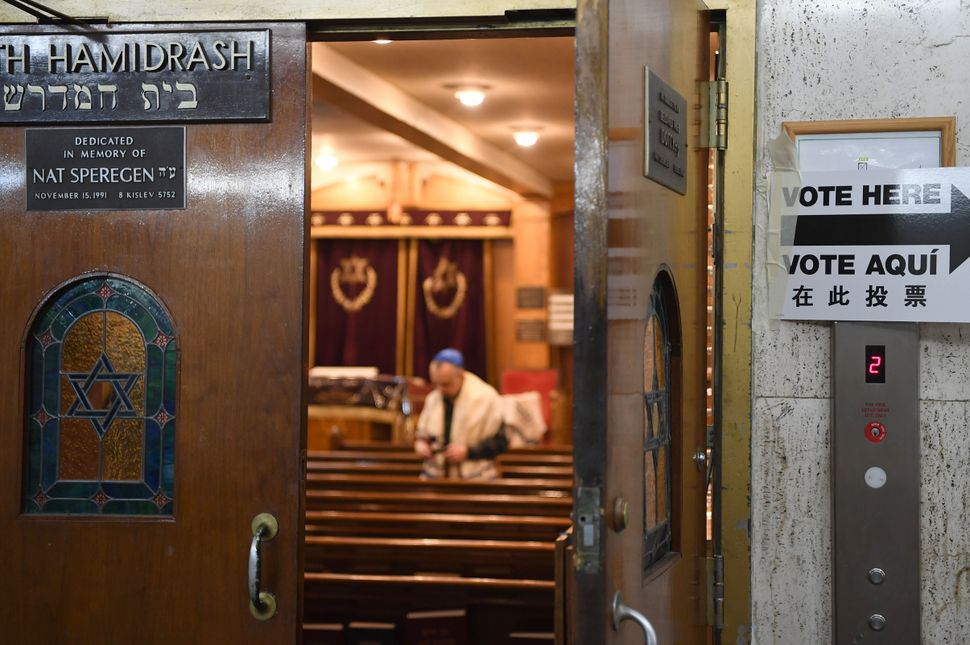 Birth and death, marriage and coming-of-age. These are the kind of life-changing events in which congregants look to rabbis to provide guidance and consolation.

But what about an election whose result has shocked many Jews down to their souls? Here is what some rabbis have been telling their congregants since Donald Trump emerged clearly with 270 votes in the Electoral College on Saturday night:

When God offered King Solomon anything he wished in I Kings 3:9, King Solomon asked for one thing only: “Give me a listening heart so that I can govern your people well and know the difference between right and wrong. For who by himself is able to govern this great people of yours?”

I need some time to absorb the shock, the horror, and the unspeakable disappointment. For now, I will just say this: Jews, and people of conscience everywhere, are called to commit our lives to love and to justice.

There’s a mindfulness practice that uses two phrases to help us focus on what is real and true about our lives. When we are still and present, we ask ourselves, without judgment and with a curious mind: “What is this?” What is real and true about my life right now and what is fashioned by my fears? Consider. Breathe. Notice. Then, say aloud: “Don’t know.” Repeat the process. “What is this?” Breathe. Discern. And then, again, answer, “Don’t know.”

Dayenu is not enough. We need time to process this moment and then we need to act. We do not have the luxury of complacency. It is incumbent upon every one of us to find a pathway towards meaningful action.

When I first heard that Donald Trump was now our next president, I immediately thought of the jolt that Mordecai must have felt when learned that Haman had been appointed prime minister of Persia. Mordecai would not bow down or kneel to Haman. Mordecai wore sackcloth to get attention. I comforted myself in knowing that Mordecai was smart enough to “sit inside the palace gate” (Esther 2:19) surveying the intrigue of the palace first for the king’s protection and then for the protection of his people. Our democracy still affords us the opportunity to keep our eye on power and stand in the opposition if necessary to curb it.

On this post-election day, I hope that we will take the time we need to absorb what has happened and then figure out how to move forward together, keeping in mind that this is not the end of the story.

It’s also a little bizarre that today happens to be the 78th anniversary of Kristallnacht, when Nazis carried out a massive pogrom against the Jews of Germany, smashing shop windows and murdering dozens. Without making any equivalency, to me this coincidence is simply a reminder of the sense of urgency many of us feel and the serious stakes of politics. This week, we should all dispense hugs freely, and try to go easy on ourselves and others. We should reach out and reassure those around us — our friends, our children, and most especially anyone who may be feeling particularly vulnerable right now (and it’s a long list: women, Muslims, people of color, Mexican immigrants, the LGBTQ community, survivors of sexual violence, people with disabilities, veterans, etc., etc.) — that we are in it together, that we will have each other’s backs, that together we will find a way forward.

To celebrate our core values and care for each other, I invite you to join me at three different upcoming events listed below or call me for a coffee date. I am here for you, to talk and share and discuss the future.

The election has not been called, but… no matter who wins the country is fundamentally different than many thought, whether they feared or hoped to see these results. The voters for Trump are not monolithic and they include friends of mine whose character is in my opinion vastly more worthy than the candidate for whom they voted. There are also among his supporters a not insignificant number of people who have no stake in the fundamentals of constitutional democracy as it has been understood for generations. No stake in basic racial equality, religious tolerance or inclusion of the diverse mosaic that makes up this country.

As deeply invested as I have been in a certain set of political ideologies and governing principles, I know that I cannot simply rely on [these] to safeguard the essential nature of our democracy. The real story for me is the strength of the counterpunch to an establishment that has seen itself as trying to ensure maximum social inclusion and, yes, progressive values. Some of the reaction is fatigue with the powers that be, some is the push back of a different worldview and some is much darker. Tomorrow will still require work no matter what.

Our government provides the platform for us to live as free citizens. American democracy by its very nature is an adversarial system. Doing justice, loving mercy, and walking humbly with our God, on the other hand, is the role of each one of us created in the Divine Image. Uniting with people from all backgrounds parties and faiths we will continue to bring healing.

In this week’s parasha, Abram goes on a journey – traditionally understood as not knowing where he is going to end up, a journey “to a land that I will show you.”

The disappointment some feel during this election is not just because a candidate won and a candidate lost. It is a fear –- a fear that the progress this country has made, great progress forward towards justice and equal rights, progress that I believe our tradition celebrates as well, will stop. So for those disappointed, I say that the journey continues just as Abram continued Terach’s journey. We will come together as a community, as a diverse people, and we will continue the American journey.