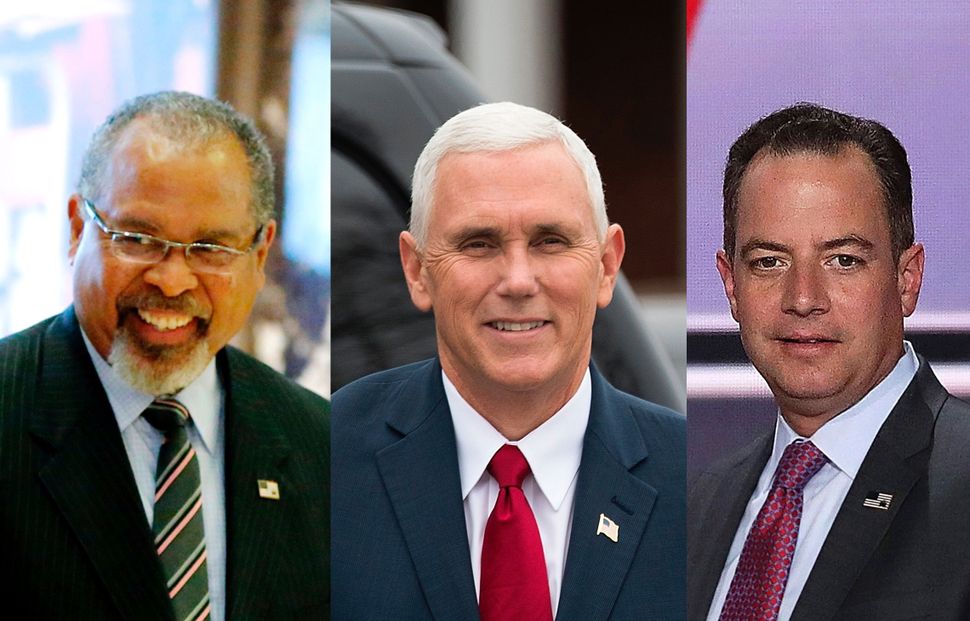 The letter came amid a heated Jewish communal debate over so-called gay conversion therapy, a widely discredited, potentially harmful practice that is partially outlawed in some states.

Opponents of the practice won a major victory last year, when a New Jersey court closed JONAH, the leading Jewish conversion therapy organization. Today, the debate over the practice has largely fizzled in the Jewish community, as Jewish gay rights advocates have begun to consider the practice a thing of the past.

Now, however, this could change. Some of President-elect Donald Trump’s closest advisers, including Vice President-elect Mike Pence and incoming chief of staff Reince Preibus, have supported gay conversion therapy, raising fears of a potential sea change that could resurrect the communal battle over the practice.

“If so-called conversion therapy were on the table, it would certainly be incredibly problematic, and I would even say dangerous, for people in our community,” said Catherine Bell, national program director of Keshet, a Jewish LGBTQ advocacy group.

Meanwhile, some Orthodox groups continue to defend the right for individuals to seek conversion therapy. “Personal autonomy, including the ability to control one’s behavior through proven therapies, should be a cherished part of a free society,” said Rabbi Avi Shafran, director of public affairs for Agudath Israel of America, the ultra-Orthodox umbrella group that has opposed legislative bans of the practice.

Ken Blackwell, who is in charge of domestic policy for the Trump transition team, has advocated for conversion therapy.

Pence, the vice president-elect, has said that the federal government should fund conversion therapy. And Priebus, who will serve as Trump’s White House chief of staff, is currently chairman of the Republican National Committee, which included language in its platform this year that many saw as an implicit endorsement of the practice.

Conversion therapy is opposed by major medical organizations, and is considered potentially harmful. It is presently illegal to offer conversion therapy to minors in five states and in the District of Columbia.

Practitioners of conversion therapy have used a wide range of measures, including chemical castration, electric shocks and even lobotomies. In recent decades, conversion therapy programs have mostly consisted of counseling, role play, and other exercises. A plaintiff in the lawsuit against JONAH said that he had been forced to act a traumatic scene of abuse from his childhood.

The American Psychological Association warns that conversion therapy is based on ideas about homosexuality now rejected by the mental health professions, and that the programs can harm young people because they claim that homosexuality is a disorder, and “often frame the inability to change one’s sexual orientation as a personal and moral failure.”

Jewish groups tussled over conversion therapy for years in the early 2010s, as gay advocates pushed back against the treatment, and Orthodox leaders insisted on its legitimacy. The Modern Orthodox movement’s Rabbinical Council of America rescinded its support for the practice in 2012, but some individual rabbis, and many in the ultra-Orthodox sphere, continue to defend its use. Months before the RCA’s statement, more than 200 leading Orthodox rabbis signed an online letter promoting conversion therapy.

“Understandably, a Torah-observant Jew challenged by same-sex attraction, even if he is successfully overcoming the urge to give vent to his desires, feels torn between what his interior emotional landscape is telling him and what his Torah is,” Shafran wrote in a 2012 Forward op-ed. “If there is a possibility of therapy that will enable him to fully lead a Torah-true lifestyle, then such therapy is precisely what he should pursue.”

Yet the Jewish communal debate over conversion therapy has remained quiet since last year, when a New Jersey judge forced the leading Jewish conversion therapy group, called JONAH, to shut down and pay $3.5 million in legal fees following a fraud trial brought by the Southern Poverty Law Center.

“Keshet does not deal on a regular basis with people struggling with instances where they’re being forced into or asked to do conversion therapy,” Bell said. “This is not the biggest headline for us of late.”

The former leader of JONAH, Arthur Goldberg, did not immediately respond to an inquiry from the Forward. A former JONAH volunteer, Ted Berk, said that the organization no longer existed. “People have a right to choose, just like people go to Weight Watchers, Alcoholics Anonymous,” he said. “If you suppress their right to seek counseling, then the government is in bad shape.”

Shafran said that Agudath Israel does not support the methods formerly employed by JONAH.

Bell, for her part, said, she feels that all sorts of debates are reopening under Trump. “I have learned from this election to be careful [about being] too confident in my belief when I feel that what I think is widespread common knowledge,” she said. “When you have a president-elect on TV… saying in a not entirely clear-cut way that the Supreme Court case establishing the right to equal marriage, that he probably will not try to impact that… it’s not the kind of unequivocal stance that you’d want someone to make.”

Clarification: An earlier version of this story did not explicitly state that Agudath Israel does not support the methods formerly employed by JONAH. The story has been updated to clarify that point.