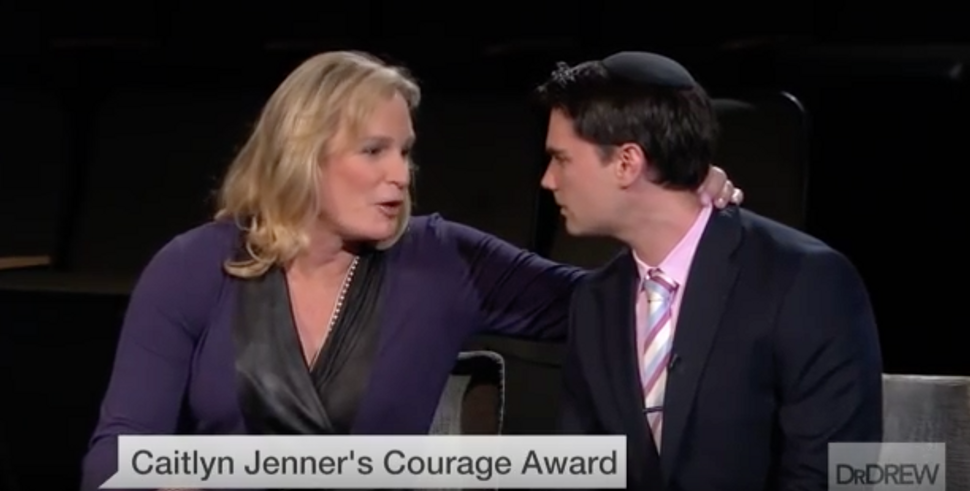 “The Jewish Orthodox community is playing footsie with the alt-right,” Zoey Tur told the Forward in an exclusive interview.

Last July, Tur and Shapiro clashed on CNN’s Headline News over the rights of transgender people. Shapiro referred to her as “sir” and claimed that celebrating Caitlyn Jenner for coming out as trans was akin to “mainstreaming delusion.” Shapiro is also Jewish.

Tur, an Emmy award-winning broadcast journalist who famously tracked down O.J. Simpson during a car chase, gripped the back of Shapiro’s neck. “Cut that out now, or you’ll go home in an ambulance,” she said. Shapiro filed a complaint against her that the Los Angeles Police Department soon dropped. Tur said she received a deluge of death threats from “alt-right” figures after the encounter.

The evening came up again last week when Shapiro mocked Tur in a speech at a Yeshiva University event hosted by College Republicans. Shapiro said being transgender amounted to “a significant mental illness” and compared that condition to paranoid schizophrenia. He called Tur “this fellow,” poked fun at her for having “a voice at least an octave below my own” and referred to her behavior during their encounter as “unladylike.”

Tur said she has no regrets.

“If I allowed him to do what he was doing, I would have been killed. Looking weak, that would be inviting more of this,” she said.

Tur, who blamed the television fracas on an unscrupulous producer at Headline News, said that Shapiro continued to discuss the incident because it left him feeling insecure and emasculated. “There’s no reason to talk about me anymore. He brings it up because he because he needs to make himself look stronger and more powerful,” she said. “He was humiliated beyond imagination on national television by a transsexual, and then went to the police.”

She told the Forward that her exchange with Shapiro alerted her to the dangers of the “alt-right,” which she says Shapiro is a part of.

“He and Breitbart are with the ‘alt-right,’” Tur said. “These are really bad people, really dangerous people. And their ideas are essentially the same, similar to Trump’s, that you can openly disparage people, don’t believe in science, trust fake news.”

Shapiro is now a target of “alt-right” trolling but was once an editor-at-large at Breitbart News, which former head (and now-White House chief strategist Steve Bannon) described as a platform for the “alt-right,” which incorporates strains of nativism and white nationalism.

Tur said she hopes that the students who applauded Shapiro last week at Yeshiva University would learn to “think for themselves” instead of relying on religious faith. “It’s time that we dispensed with our silly beliefs and magical beings that control our lives.”

Ultimately, Tur said she feels sorry for Shapiro and what she perceived to be his deficits. “He has intellect, but no insight, no empathy, no creativity,” she said.

Shapiro did not respond to multiple requests for comments as of press time.