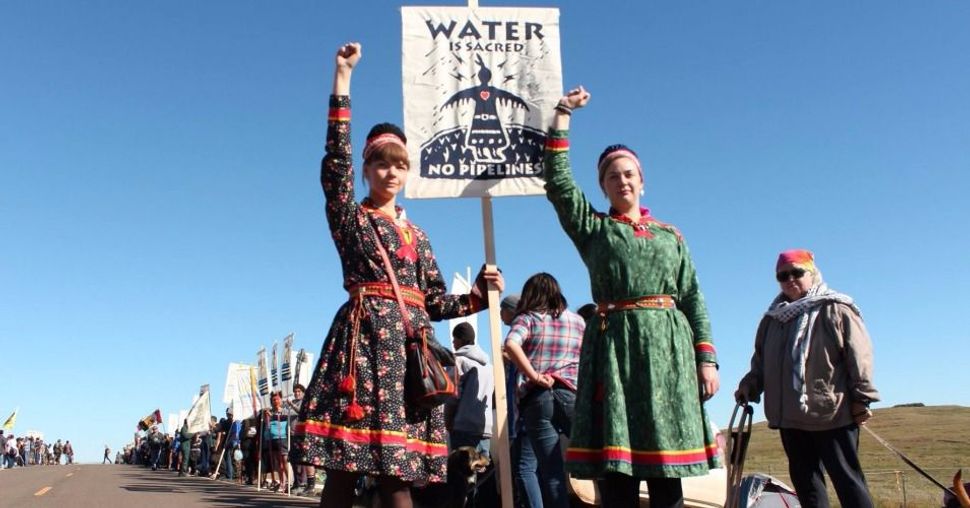 Standing Rock, the North Dakota encampment where thousands of Native Americans and their supporters this year staged a stand against Big Oil, attracted many Jews in 2016. One, 21-year-old Sophia Wilansky, almost lost her arm; an explosion that activists said came from a stun grenade tossed by local law enforcement authorities ripped and tore it badly, leaving a shredded mess and a future of many surgeries for Wilansky before she’ll know if she can regain any use of the limb.

Jessye Stein, a 24-year-old teacher at a Lakota Sioux Indian school in South Dakota, got through her participation in the protests without injury—and even gained something she never expected: a burning passion to learn Yiddish.

Stein, who lives on the nearby Pine Ridge Reservation in South Dakota, helped Lakota friends last April to set up the protest encampment against a massive 1,172-mile pipeline running across Lakota land and under the Missouri River, which the Lakota use as a water source. The small protest grew over the following months. But in July, Stein left the encampment at the urging of her Native American friends to study Yiddish at an organic farm in Goshen, New York, Yiddish Farm, that runs intensive language immersion classes.

Stein’s motivation to learn the language came from an exchange with one of her students, who asked her what her own background and native language were. She had to confess to him she didn’t know her own ancestral language. Thus, the encampment, which became a rallying point for Native Americans seek to revive their various cultures, reframed Stein’s sense of identity, as well.