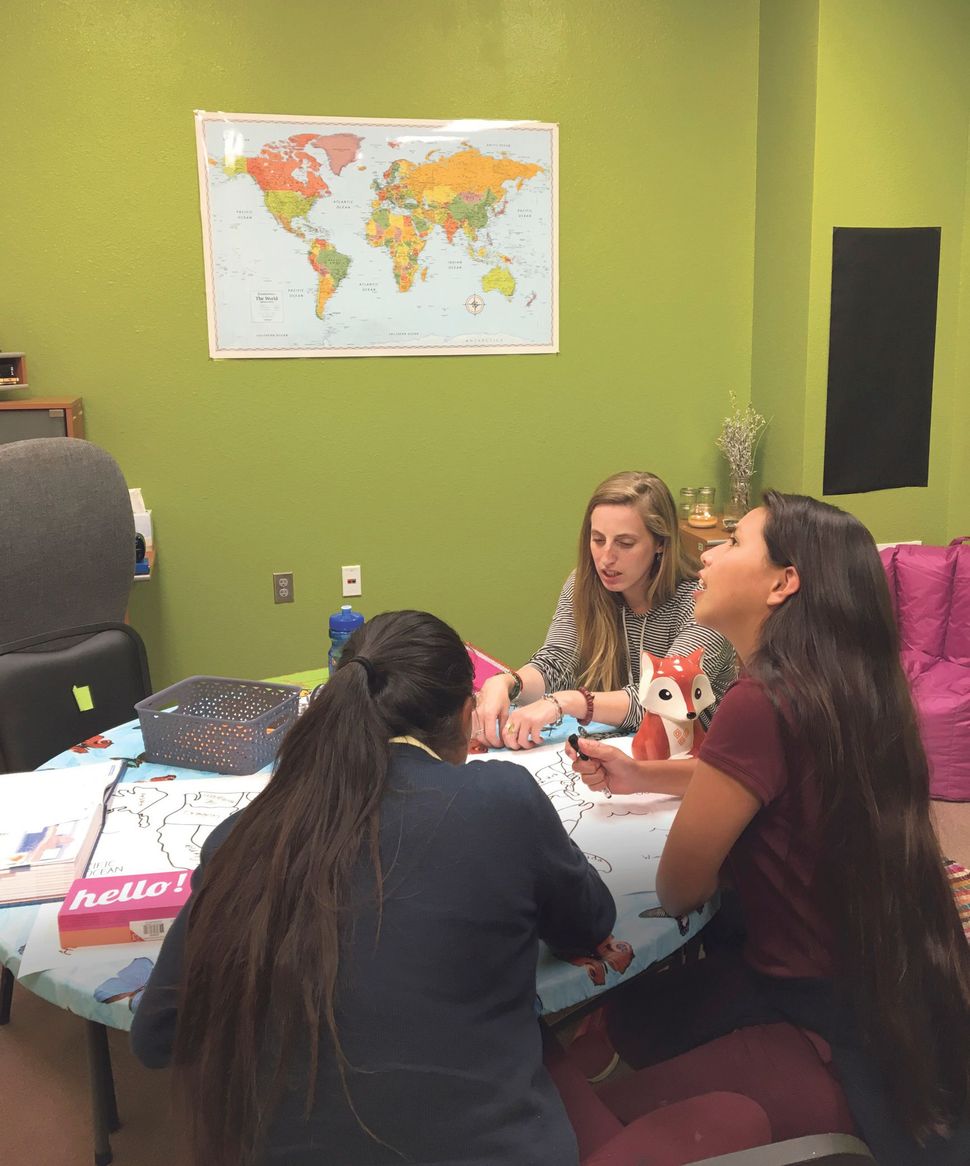 Learning From Her Students: Jessye Stein teaches geography to students at the Pine Ridge Girls School in South Dakota. Image by Maria Ramirez

One day, Jessye Stein, a computer teacher on the Pine Ridge Indian Reservation in South Dakota, was trying to persuade a student to return to his Lakota language class when the young man suddenly posed an unexpected question.

“He asked me where I come from, where my people come from and what my ancestral language is,” she recalled.

Stein, 24, told the student she was Jewish and that her ancestors spoke Yiddish. But that just prompted the next, obvious question: “He asked me if I could speak Yiddish,” she recounted. And when she said no, he accused her of being a hypocrite.

That was, in a nutshell, how Stein ended up this past summer learning Yiddish at Yiddish Farm, an organic farm in Goshen, New York, that works entirely in the mameloshn and runs intensive language immersion classes. And that was where Stein found herself when history happened on an encampment at a reservation about six hours north of Pine Ridge. Protests against a massive oil pipeline, partly organized by a group Stein had helped start, had grown by leaps and bounds to defend land local Native American groups view as both sacred and crucial to their welfare.

“I was already at Yiddish Farm when the camp blew up,” Stein said, referring to the protest site. “My phone wouldn’t stop beeping because my number was still on many of the press releases. I really hadn’t wanted to leave the camp. But my friends told me that I needed to go.” One of them, a fluent Lakota speaker and language activist, “strongly felt that I should go learn Yiddish.” 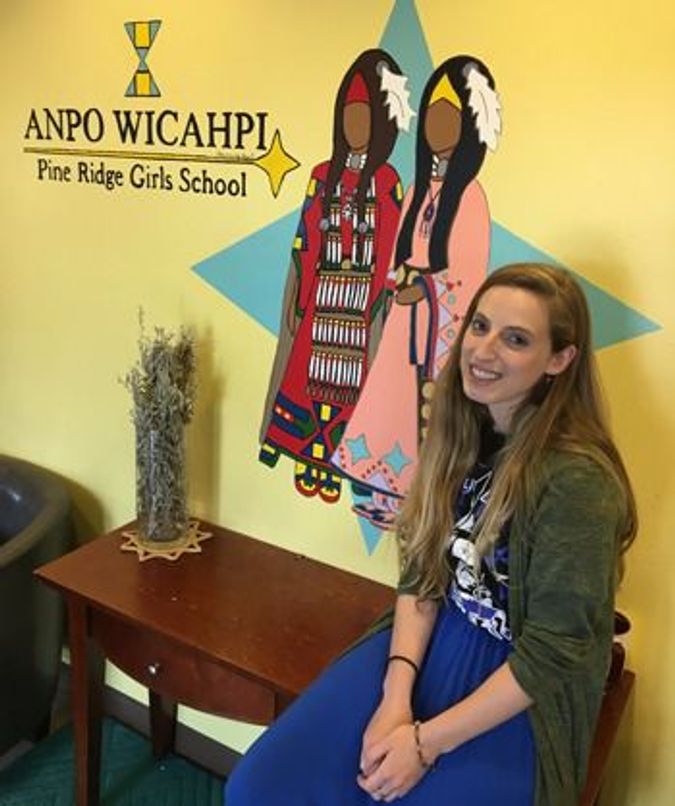 A Different Approach: Stein started teaching at the Pine Ridge Girls School, which incorporates Lakota culture throughout the curriculum, in September. Image by Dusty Nelson

Several months before she left for Yiddish Farm, Stein became an early participant in the current struggle to protect Native American land in the Dakotas. Energy Transfer Partners, a Texas-based oil and gas company, is trying to build an immense 1,172-mile pipeline from North Dakota to Illinois over the objections of Dakota people on the Standing Rock Reservation, whose land it will cross. Like the Pine Ridge Reservation to the south, where Stein works, the Standing Rock Reservation, which straddles the border between South and North Dakota, suffers from a shortage of potable water. Waniya Locke, a close friend of Stein who lives on Standing Rock, called to tell her that the proposed Dakota Access Pipeline would snake under the Missouri River, endangering the reservation’s principal water source.

In March, Stein, Locke and another friend, Margaret Potts, founded the organization People Over Pipelines to help rally opposition to the plan. The activists met with tribal councils and Dakota elders, and organized protests. People Over Pipelines, alongside other organizations such as ReZpect Our Water, circulated a petition that received more than 200,000 signatures. A group of runners carried the document over 550 miles to Omaha to deliver it in person to the nearest district office of the U.S. Army Corps of Engineers. Stein accompanied the runners for 15 miles of their journey.

In April, demonstrators founded an encampment known as Sacred Stone Camp on the Standing Rock Reservation in an effort to monitor the situation and prevent construction of the pipeline through direct action and communal prayer. Stein helped organize a group of young people who rode horses to the camp, stopping at sites that are holy or of historical importance to the Dakota people.

“In the beginning it was just a small group of people protesting and standing alone. Sometimes we were only four,” she recalled. “But we knew that more people would come with time.”

By July, several hundred people from more than 90 tribes nationwide were participating daily. On weekends, their ranks swelled to thousands. Videos of the camp — and especially of clashes between protestors and guards hired by construction companies working on the site — spread rapidly through TV and social media.

Today, hundreds of tents and teepees, serving as homes to whole families, dot the protest site, at the confluence of the Missouri and Cannonball rivers and stretching across the plain. What has become the largest gathering of indigenous nations in modern American history has moved the U.S. Army, the Department of Justice and the Department of the Interior, which oversees Native American affairs, to issue two key decisions. One, by the U.S. Army Corps of Engineers, was to hold off on issuing permits to Energy Transfer Partners to dig on federal land near or under the Missouri River above the Standing Rock Reservation. The other was an announcement that this fall, the government would discuss with tribes how “to better ensure meaningful tribal input” into infrastructure-related procedures affecting “tribal lands, resources, and treaty rights.”

Mindful of the federal government’s broken promises and treaties throughout the country’s history, the protesters have vowed to remain until the project is definitively canceled and federal policy changes are instituted. Stein’s small protest movement has become a historical struggle that has captured the nation’s attention.

Back home now, in Porcupine, South Dakota, on the Pine Ridge Reservation, Stein is again immersed in the struggle. But her summer at Yiddish Farm has affected her.

“I actually wanted to learn Yiddish as a child,” she said in a phone interview with the Forward. “My father told me that there was no point, that I might as well learn Hebrew instead. But it didn’t feel the same. I come from a very assimilated Reform family, and although I went to synagogue and had a bat mitzvah, I felt that my student was right. I was estranged from my roots. I was a bit of a hypocrite.”

Stein spent a lot of her time at Yiddish Farm thinking about the similarities between Ashkenazi Jewish and Lakota culture. Though the two seem worlds apart, she saw certain similarities. The relationship of both groups to their ancestral language, for instance, has been strongly influenced by the collective trauma of genocide.

“The difference is that for Jews, the oppression didn’t happen here in America, and American Jews don’t live in the same place where their trauma occurred,” Stein explained. “The Lakota still live where that trauma and language loss occurred, and they had no safe place to go. This definitely affects how people perceive the language.”

Stein voiced frustration that there has been so little discussion about the pipeline protest in the Jewish world. One of the few groups to demonstrate in support of the effort, she noted, is Jewish Voice for Peace, which is essentially persona non grata in the organized Jewish community due to its stance on boycotts, divestment and sanctions relating to Palestine and Israel. In July, the group sent a delegation to the National Democratic Convention in Philadelphia to join a protest in solidarity with the demonstrators on Standing Rock.

“Of course, the Israeli-Palestinian conflict is a big divisive issue for American Jews,” Stein said. “But I think that supporters of both sides should be supporting them. If you’re a Zionist, you better stand up for the rights of indigenous people because you believe that [Jewish] Israelis are indigenous. [And] if you support Palestinians why aren’t you standing with Native Americans?”

Indigenous issues and the plight of endangered languages were the main reasons Stein originally decided to move to Pine Ridge.

“I studied Spanish and Turkish in college, and through my Spanish classes, I became aware of the endangered languages of Latin America and the efforts to revive them,” she said. “I wanted to see similar programs up close.”

Stein received a teaching fellowship through AmeriCorps to work at a Catholic high school on the reservation, which is known for its intensive Lakota language program. While teaching computer skills, she became a student herself, sitting in on Lakota classes at the Red Cloud Indian School.

Life on Pine Ridge is very different from her life growing up in Connecticut and going to college in Boston. The reservation is larger than Delaware and Rhode Island combined and home to one of America’s poorest communities. Eighty percent of Pine Ridge’s approximately 30,000 residents are unemployed. Forty-nine percent, including 61% of the reservation’s children, live in poverty. Nearly half of the reservation’s houses lack electricity or running water. Environmental toxins left behind from uranium mining have led to increased cancer rates. Other diseases, including diabetes and alcoholism, shorten life expectancy by nearly 30 years compared to the national average.

For all that, Stein said, “There’s a lot of beauty here.”

After generations of suppression by schools and government agencies, the Lakota language and culture is undergoing a renaissance. Education institutions such as the Red Cloud Indian School once punished children for speaking their mother tongue or using their Lakota names. Now, they encourage students to embrace their culture.

“The Christian schools, the public schools, the private schools — they’re all pushing the language and culture and trying to produce new speakers,” Stein said.

In September, Stein began working at the Pine Ridge Girls’ School, a new school whose mission is to transmit Lakota traditions. With an initial enrollment of 16 girls in sixth and seventh grades, the school teaches all its classes through the lens of Lakota culture. In geography, Stein’s students create a map of the reservation and learn the local Lakota names for the region’s towns. In science, her students learn about the big bang and explore how the scientific theory aligns with the Lakota understanding of the origin of the universe.

“Our goal is to give the girls a sense of self, a sense of rootedness in their culture and an understanding of what that means for their life,” Stein said. “It’s going to be a beautiful place, a healing place.”

Jordan Kutzik is a staff writer for the Forverts. Contact him at kutzik@yiddish.forward.com

This is translated and adapted from the October 2016 issue of the Yiddish Forward.