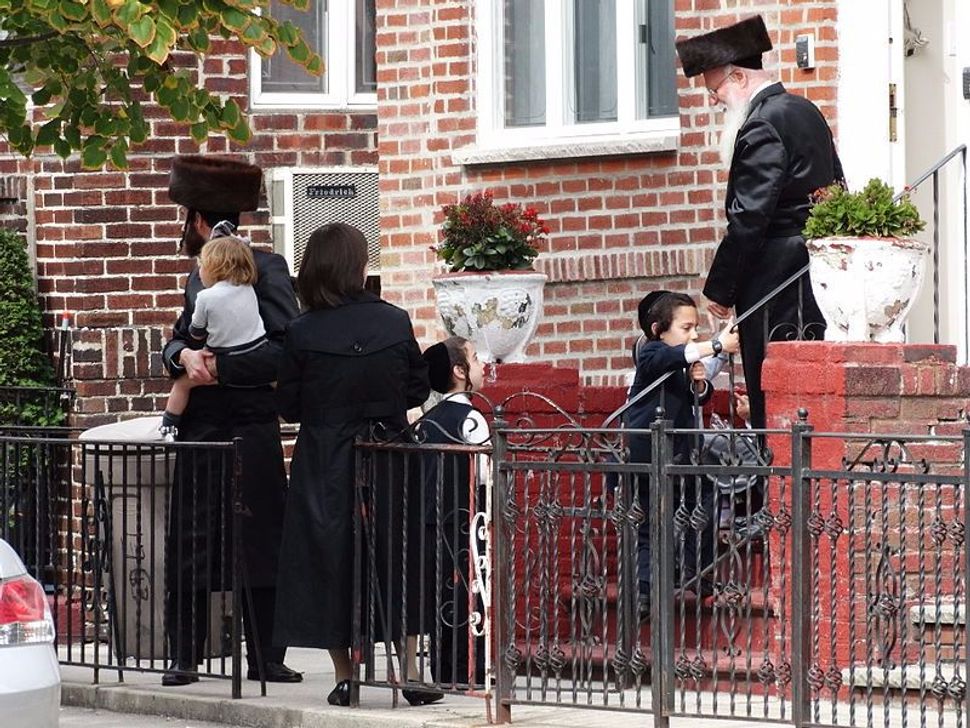 Since Donald Trump’s election, Jews in New York have been the targets of more than half the city’s hate crimes, from Williamsburg and Brooklyn Heights to the New School in Manhattan; and all this, amid the sharp spike in reports of anti-Semitic vandalism and hate speech nationally.

Yet in the heavily Orthodox neighborhood of Borough Park, Brooklyn, where residents gave Trump 69% of their votes, few seem alarmed by the onslaught of hatred that has accompanied the ascent of the man they supported. And the reason many give seems simple.

Like many of those I interviewed in Borough Park recently for this story, Horowitz saw Trump as an unstinting supporter of Israel and its policies. For her, that meant that allegations of anti-Semitism associated with him or those around him were unfounded. Her view on anti-Semitism was clear: “If you’re anti-Israel, you’re anti-Semitic,”

Nationally, 72% of Jewish voters backed Democrat Hillary Clinton. But the pro-Trump viewpoint of Borough Park’s Jews, though a minority one, is growing louder. Orthodox Jews, who constitute about 10% of American Jews today, are poised to become a much larger percentage of the community in coming years. Thanks to much higher birthrates and less intermarriage than their non-Orthodox counterparts, 27% of American Jewish children today are Orthodox

In Borough Park, not even Trump’s appointment of Stephen Bannon as White House Senior Counselor has dented the confidence of residents in Trump, despite Bannon’s own description of Breitbart News, the website he ran, as “the platform for the alt-right.” That’s the term used by many white supremacists to describe their political movement, which has gained greater political acceptance under Trump’s banner.

Borough Park’s Jews have also not been dissuaded by Trump’s own attacks against perceived opponents, on the basis of their race, religion, ethnicity or disability. In July, Trump’s posted an image on his Twitter account of Clinton next to a six-pointed star lifted from a Neo-Nazi website, with cash in the background.

Yet even for one woman who was a child of Holocaust survivors and preferred not to be quoted, the notion of a shared plight with those Trump targeted didn’t resonate.

As for the revelation in October of the video in which Trump boasted about sexually molesting women, “What men haven’t said that?” said Horowitz. “Every man has said something like that in his lifetime.” It was a reaction that was universal among the women I interviewed, who all identified as conservative adherents to the Hasidic way of life.

As Sol Way, a 28-year-old Borough Park resident explained, “People in my community vote on politics and policy, not values. I’m a neocon, and I’m glad that Trump is filling his Cabinet with traditional Republicans.”

Way, an avid reader of Breitbart News, said he never perceived Bannon as an anti-Semite. “It’s very pro-Israel,” he said, referring to Breitbart in a way that made clear that this was the crux of the matter.

Ezra Friedlander, the CEO of the Friedlander Group public relations firm and himself a Hasidic Jew from Borough Park, isn’t surprised by the community’s apparent indifference to the manifestations of anti-Semitism accompanying Trump’s ascent that has so disturbed other Jews.

“Orthodox Jews walk around with the notion that there’s anti-Semitism everywhere,” he said in a phone interview. “We’ve internalized it; it’s in our DNA.”

As a result, the anti-Semitism many other Jews associate with Trump seem to the Hasidim like nothing new. While some may acknowledge that Trump supporters have brought anti-Semitism to the fore, they don’t necessarily attribute it to the president-elect himself.

According to Friedlander, who did not vote for Trump, the community’s self-imposed insularity is central to explaining its support for him. “Part of the downside of living in a vibrant Jewish community such as Borough Park is that you have very little interaction with the outside word, if you don’t want to,” he said.

The South Brooklyn neighborhood routinely votes red in a sea of blue. In many ways, it’s a reality apart, with kosher restaurants, Judaica stores and clothing boutiques that cater exclusively to the community. The neighborhood has also become increasingly homogeneous over the past several decades. And to be sure, none of the anti-Semitic vandalism that has hit New York lately appears to have taken place in Borough Park.

Friedlander identified a growing tendency to vote on Israel alone as a central factor in what he describes as the community’s rightward political shift. This helps to obscure the risk of rising anti-Semitism associated with a Trump administration, he said. It also helps to explain why a community that relies heavily on big government for financial assistance often votes Republican.

“The bottom line is, a large percentage of Orthodox Jews with large families rely on the social programs that Democrats support—section 8, food stamps, WIC—to make ends meet on a daily basis,” said Friedlander. “I say, don’t bite the hand that feeds you. Yet support for Israel has led to the exclusion of other considerations. It’s a deal-breaker, the No. 1 issue.”

Nevertheless, Samuel Heilman, a sociologist at Queens College who focuses on contemporary Jewish Orthodox movements, warned against overstating the role Israel plays. “The community is politically conservative because it’s socially conservative,” he said by phone. “They believe that the ring wing speaks to their values.”

For Heilman, the community’s apparent acceptance of Trump’s sexual attitudes extends from the notion that the secular world is highly sexualized—that non-Jews are necessarily deviant and that Trump is simply a product of that world.

Members of such a close-knit, values-driven community are also less likely than their secular counterparts to see politicians as potential role models; as members of the secular world, their values are already inferior.

“The person running for office or in office is not someone that I would hope for my children to aspire to or to follow in his or her footsteps,” said Friedlander. Moreover, he said, the explicit nature of Trump’s comments about women were not reported in the Hasidic press. “They weren’t part of the daily conversation.”

Many Hasidic Jews see Democrats as worse, according to Friedlander. “A movement that wants to delegitimize a family from worshipping, or delegitimize traditional marriage,” he said, explaining their view. “They see something very sinister.”

Their lack of access to—or interest in—mainstream media also leaves them open to many false notions propagated elsewhere. “We know that Hillary is a murderer—at least by proxy,” Horowitz told me. “She’s a thief and a liar.”

Finally, while many immigrant communities in the United States seek to integrate and gain equal rights, Hasidic Jews don’t aspire to become American. A sentiment of superiority learned from youth precludes any notion of solidarity with other minority groups. Instead, they are often subject to the Hasidic community’s own prejudices, Heilman said.

“They live in a fortress, in ghettos of their own making,” he explained, “not ones they’ve been put into by others.”