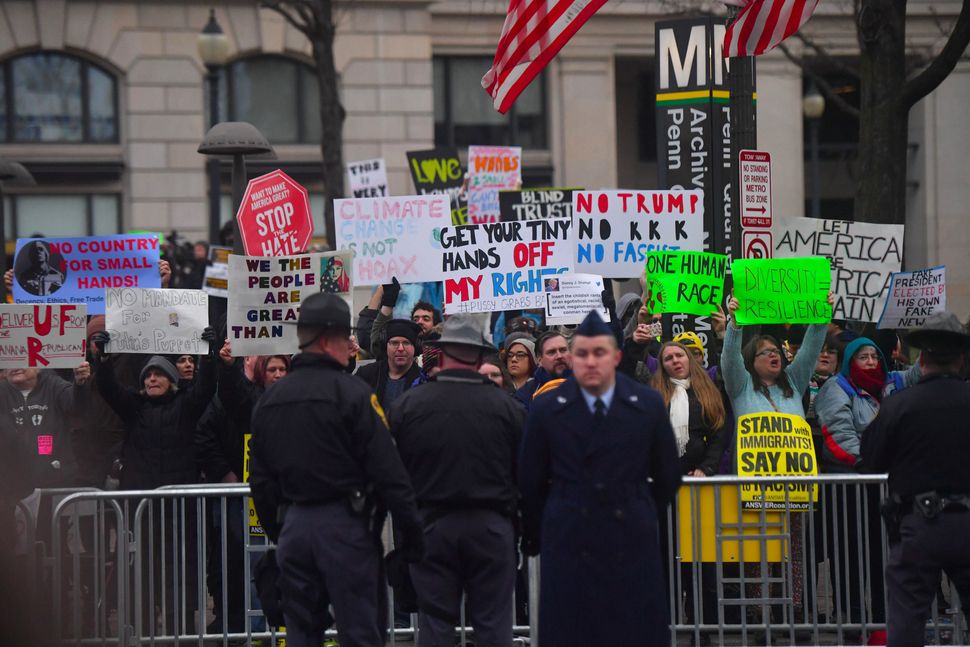 The day of Donald Trump’s inauguration, protesters had already gathered.

Occupy Wall Street. Black Lives Matter. Recent progressive movements have included in their statements of mission and goals prominent denunciations of Israel. But that didn’t happen during the run-up to the Women’s March on Washington, expected to attract hundreds of thousands of participants, to take place on January 21, the day after Donald Trump’s inauguration as president.

The reason: Jewish groups intensified their engagement with the platform-production process, asking repeatedly — including as recent as Thursday — whether the official march would get into the Israeli-Palestine issue. The answer was no — the parts of the platform discussing issues and struggles beyond the immediate definition of women’s rights, will not veer toward the question of Israel.

“The way to deal with it was by sitting around the table, talking and editing,” said Nancy Kaufman, CEO of the National Council of Jewish Women, “and we feel very good with the results.”

In addition to NCJW, the American Jewish World Service, Bend the Arc, Hazon, Jewschool and Lab/Shul, among others, are officially sponsoring the march. Others, such as the venerable women’s organization Hadassah, are not, citing its status as a Shabbat-observant organization.

But among the hundreds of thousands of participants in the rally scheduled for Saturday morning, just as Donald Trump settles in in the White House, some clearly intend to raise the Israeli-Palestinian issue. Activists from Jewish Voice for Peace, a Jewish organization that supports boycott, divestment and sanctions against Israel, will be carrying signs reading “Resist Together – From the U.S. to Palestine.” Other signs will call to “boycott injustice.” The group’s spokeswoman Naomi Dann said JVP prepared signs, buttons and sashes carrying these messages and its members will take place in the main march in Washington as well as in other marches across the country.

“I told a lot of our folks who are worried about it, that this doesn’t mean there won’t be some people marching with anti-Israel and pro-BDS signs,” said Kaufman. The National Council of Jewish Women is one of the largest Jewish partners participating in the march.

The lack of an Israeli-Palestinian component to the march is notable due to the liberal makeup of the participating organizations and the partnership with several Arab-American and Muslim-American organizations. Linda Sarsour, a prominent New York-based Muslim and human rights activist, is part of the march’s leadership committee.

But the unity achieved in Washington was harder to maintain in Israel, where an anti-Trump rally planned for Saturday has experienced a split over the Palestinian question. The protest was planned by three groups, one of them insisted on focusing on Trump and fighting bigotry in America, while the two others sought to raise also Trump’s stance on the conflict and the views of his ambassador-designate to Israel David Friedman.

While managing to avoid the pitfalls of the Israeli-Palestinian conflict, organizers of the Women’s March on Washington found themselves embroiled in many other conflicts as they tried to navigate a desire for inclusivity with a clear message on white privilege and cherished liberal values.

Pro-life feminists felt left out of the rally because of its support for abortion rights; In other cases, white women said they were offended by the sense that the march was dominated by black causes.

But these tension did not seem to dampen the resolve of Jewish women to take part in Saturday’s march and organizational leaders expect thousands of Jewish participants identifying as members of Jewish denominations and groups. The Reform Movement will hold a pre-rally event, other Jewish groups will gather before and march, escorted by police, to join the rally, and the speaker lineup includes several prominent Jewish woman leaders including feminist Gloria Steinem, Rabbi Sharon Brous of IKAR community in Los Angeles, and Randi Weingarten, president of the American Federation of Teachers.