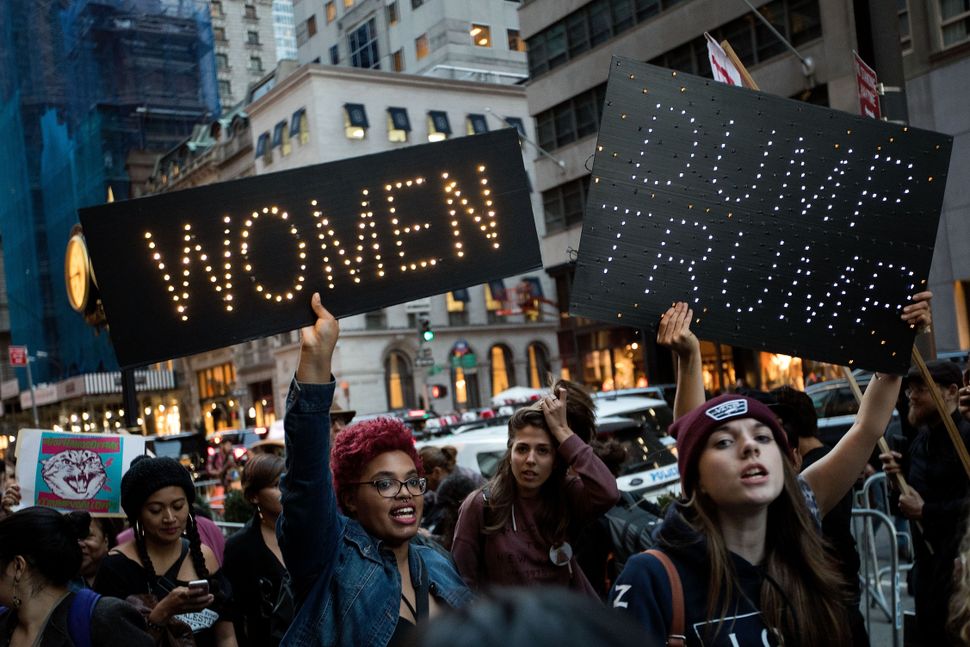 Women. Remember women? We were #trending for a while there. But then Hillary Clinton, woman, lost the presidential election, and all that women stuff got returned to the niche concerns folder.

That was on the main stage. On the ragged square-inch platform where women concerned with women-specific issues talk amongst ourselves, the conversation continued and continues.

With the relatively uncontroversial goal (within feminists circles, that is) of a Democratic woman president no longer in the cards, what ensued was a zero-sum debate over whether feminism is too focused on middle-class white ladies or, conversely, whether this is the very group whose needs feminism ignored, thus leading the ladies in question to vote, in startling numbers, for Trump.

The discussion is now coalescing around the upcoming Women’s March on Washington, scheduled for January 21st, the day after the Inauguration (and, relevant for Jewish observance purposes, Shabbat). In the New York Times, Farah Stockman reports on the tension between unity and intersectional attentiveness:

“Even as they are working to ensure a smooth and unified march next week, the national organizers said they made a deliberate decision to highlight the plight of minority and undocumented immigrant women and provoke uncomfortable discussions about race.”

This seems right. After all, the more marginalized a woman is, the worse the Trump administration promises to be for her. At the same time, Hillary Clinton’s defeat represents the obstacles faced by even otherwise advantaged women. Elite feminism or whatever one wishes to call it is woefully insufficient but has yet to be rendered obsolete.

What comes through painfully well in Stockman’s article is that some white women who oppose Trump, and who want (or wanted) to attend the march in order to speak out against their own oppression resent being told that the point of the march is actually to remind them of their own complicity in oppressing people of color. What’s less straightforward is how sympathetic to be to that resentment.

Here is where American Jewish women come into this story. Many of us – not all, but I dare say most – are in the unique position of getting it, on a personal level, from something approximating both perspectives. We know what it’s like to be told to check our white privilege and to be despised by white supremacists. We’ve often had experience dealing with sexism of the intersectional and not so intersectional varieties. This can feel like a burden. It can be one. But it can give us insights, and maybe some answers, to what feels, at least to this particular Jewish woman, like an intractable mess.